Brazilians were angry over how slowly their government moved to acquire coronavirus vaccines. Now they’re incensed over a corruption scandal involving vaccine deals. 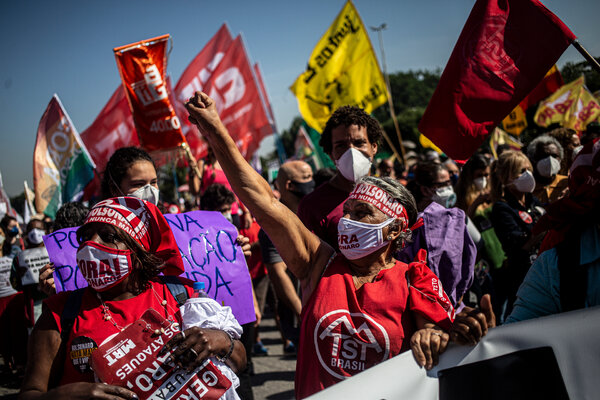 By Ernesto Londoño and Flávia Milhorance

RIO DE JANEIRO — The plot twists of a coronavirus vaccine kickback scandal that has rattled Brazil’s capital have been worthy of a reality TV show.

The main stage has been a congressional hearing room, where scores of witnesses have been shedding light on the government’s chaotic response to the pandemic, which has killed more than 520,000 in the country.

There has been plenty of yelling, a bit of crying and a fair amount of pearl clutching as the audacity and scope of a scheme by health ministry officials to solicit bribes from vaccine dealers has come into focus. The outrage drew tens of thousands of Brazilians to protest across several cities on Saturday, the third large wave of demonstrations in recent weeks.

Much about the scandal, which federal prosecutors are investigating, remains unclear and in dispute. But the widening inquiry is likely to pose a major threat to President Jair Bolsonaro’s re-election bid next year — and perhaps even to his ability to serve out the remainder of his term.

At the urging of a Supreme Court justice, the attorney general’s office on Friday opened an investigation into Mr. Bolsonaro’s role in the vaccine corruption scheme. The president is under scrutiny in a deal to secure 20 million doses of a vaccine that had not yet completed clinical trials or been approved by regulators. He is accused of overlooking a warning that there were some irregularities in the deal.

Additionally, a group of 100 legislators from a broad range of parties presented draft impeachment articles earlier in the week outlining scores of alleged crimes. They range from the president’s actions to weaken democratic institutions to accounts of negligence and malfeasance that have stymied Brazil’s Covid-19 vaccine campaign.

Opposition members of Congress say the vaccine scandal has the potential to galvanize street demonstrations of the kind that led to the ouster of President Dilma Rousseff in 2016.

“Every crime committed by the president is serious, but this one is even more serious because it involves lives,” said Joice Hasselmann, a member of Congress from São Paulo who was among Mr. Bolsonaro’s fiercest defenders until they had a falling out in 2019. “Brazil can’t stand another year with Bolsonaro.”

Mr. Bolsonaro has not disputed that senior officials in his government may have acted unlawfully in vaccine negotiations. But he called efforts to pin the wrongdoing on him unfair.

“I have no way of knowing what’s happening in the ministries,” he told supporters on Monday. “We did nothing wrong.”