Brigitte Gerney, whose legs were crushed when a construction crane collapsed on the Upper East Side of Manhattan in 1985, trapping her for six hours, freezing midtown traffic and touching off a media frenzy, died on Friday at her home in Southampton, N.Y. She was 85.

The cause was heart failure, a complication of Alzheimer’s dementia, her son, Arkadi Gerney, said.

Miracle microsurgery and skin grafting after 13 operations enabled Mrs. Gerney to walk again, but given the catalog of other tragedies she had already suffered, it was remarkable that, as Mr. Gerney said, “Count your blessings” remained his mother’s mantra.

Mrs. Gerney’s first son drowned when he was a toddler. She was seriously injured in 1982 when the cable car she was riding at a Swiss ski resort disengaged and plunged to the ground. She survived lung cancer in 1980. Her husband died of colon cancer in 1983. After the crane accident, a doctor who had treated her, and whom she planned to marry, was shot dead by a retired fireman who had been awaiting a decision on his medical disability claim.

“Her reaction to this horrible litany of misfortune?” her son said. “She would say: ‘On the one hand, only in a place like New York does a crane fall on you when you are walking home from the dentist. On the other hand, only in New York would they shut down half the city, have these crazy, brave people crawl under a teetering crane to save you, and then have the best doctors in the world somehow rebuild your smashed legs.’”

The city held its breath as Mrs. Gerney, the 49-year-old mother of two children, ages 11 and 14, was suspended between life and death during a rescue operation that was captured live on television on the afternoon of May 30, 1985. 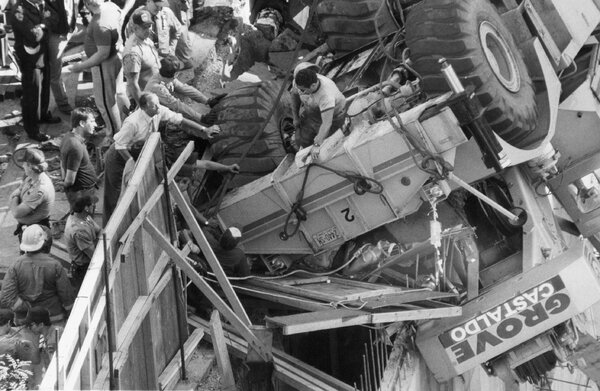 “They had lost their father and I was the mother,” Mrs. Gerney recalled later. “Children need their mother. I knew I had to live.”

Traffic stood still in Midtown as she was brought to Bellevue Hospital, where the “Crane Lady,” as she became known, would recuperate until July 24. President Ronald Reagan called. Nancy Reagan visited. Hero cops were commended.

James Essig of the 19th Precinct, among the first on the scene, was awarded a medal for valor. Paul Ragonese of the Emergency Service Unit was elevated to detective, retired from the bomb squad in 1988 and now handles security for the Durst Organization.

“What kept me alive is that he held my hand,” Mrs. Gerney said of Detective Ragonese.

“She is the most courageous man or woman I ever met,” the detective said at the time.

“There’s a point where a lot of people would have given up,” Mr. Ragonese said by phone this week. “She had a strong belief in God. The only thing she worried about was her children. She wanted them to know that their mother loved them.”

The aftermath of the accident was front-page news for more than a year. The contracting company and the construction foreman were convicted of assault and endangerment. The foreman was fined $5,000 and placed on five years’ probation. The unlicensed crane operator, who had been ordered by the foreman to take over after the regular operator had left for the day, pleaded guilty to second-degree assault and was spared a prison sentence after Mrs. Gerney recommended compassion.

In 1988, Mrs. Gerney was awarded $10 million in damages, to be paid in monthly installments.

Brigitte Risch was born on March 14, 1936, in Vaduz, Liechtenstein, the second of eight children of Dr. Martin Risch, a physician and a member of the Liechtenstein parliament, and Josephine Risch, a homemaker.

After graduating from high school, Brigitte attended secretarial school in Switzerland and worked as a secretary for a Russian émigré businessman. In 1966 she married Arkadi Gerney, the son of her boss and a trade representative for Blaw-Knox, a manufacturer of paving equipment. They moved to New York, where he had been based.

Their son managed the Mayors Against Illegal Guns coalition for Mayor Michael R. Bloomberg of New York and wrote about the shooting of his mother’s fiancé, Dr. Peter Rizzo, for The New Yorker.

“My mother was 50 when Peter was murdered,” Mr. Gerney wrote. “She never remarried. She never even dated again.”

In addition to her son, Mrs. Gerney is survived by a daughter, Christina Maria Kilroe, known as Nina; six grandchildren; and all seven of her siblings in Lichtenstein.

Mrs. Gerney was walking home to United Nations Plaza from her dentist’s office on East 69th Street, past the foundation for a 42-story apartment building on Third Avenue between 64th and 63rd Streets, when the 35-ton base of the crane tipped over onto the sidewalk, trapping her at the edge of the excavation.

“It was like an earthquake,” she testified a year later. “The pavement cracked up under me. I remember my bag flying out of my hands; I heard the noise of all the bones cracking in my legs. I’m sure I screamed, ‘Help me, help me, get me out!’ But I was alone.”

She continued: “I said, ‘Can’t you cut my legs off and take me out? I have two children. I have to live.’ But they said they couldn’t do that, that I would bleed to death.”

“I never believed I would get out,” she said. “I thought I was dying.”

She was asked if she wanted a priest, she added, “and I said yes.”

Three cranes were dispatched to help stabilize the toppled one while rescue workers extricated Mrs. Gerney, who remained conscious the entire time.

Years later, she was asked by The New York Times whether she had ever walked again on the Third Avenue block where the accident occurred.

“I certainly don’t walk on that side of the street,” she replied.