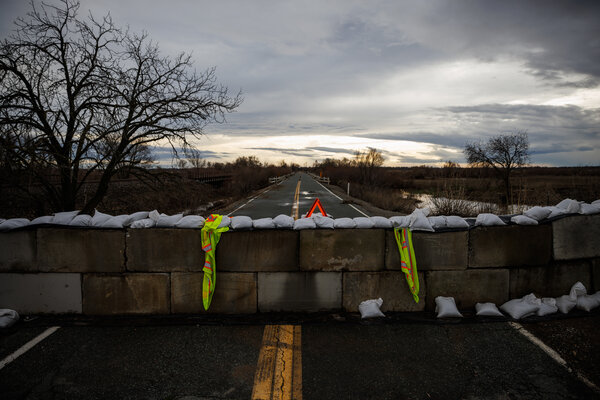 Another bout of rain, wind and snow was expected across large portions of California on Thursday, as a powerful winter storm moved eastward across the state, disrupting the power grid and threatening to cause flash flooding.

Weather conditions deteriorated overnight across much of the state as the storm, one of several that is expected to pound the West Coast this month, moved on shore from the Pacific Ocean. As heavy rain and high winds whipped across San Francisco, snow plow drivers raced to clear fresh powder in the Sierra Nevada.

Flash flood watches and winter storm warnings were in effect across the state early Thursday, and about six million residents were under high wind warnings. Forecasters cautioned that a combination of high winds and saturated ground conditions could topple trees, leading to power outages.

About 200,000 customers were without electricity in the state as of early Thursday, mostly in northern counties, according to the tracking site poweroutage.us. In a sign of the storm’s force, winds blew over the canopy above a gas station in South San Francisco, according to local television news footage.

The authorities blamed at least two deaths on Wednesday on the storm. In Fairfield, Calif., northeast of San Francisco, a 19-year-old woman died after the car she was driving hydroplaned and crashed into a utility pole, the police said. And a 2-year-old was killed when a redwood tree fell on a mobile home in Occidental, a rural community in Sonoma County, said Josh Cerda, a firefighter engineer with the local volunteer fire department.

Two to four inches of rain, and up to six inches in some places, was forecast for Northern California overnight, the National Weather Service said in an advisory on Wednesday, adding that parts of Southern California’s coast could see heavy rains later on Thursday.

That moisture raised the prospect of rapid runoff overnight along the state’s coast and interior valleys, as well as in the Sierra Nevada foothills and in areas around burn scars left by wildfires, the advisory said.

The storm is part of a series of atmospheric rivers — channels of moisture from the tropical Pacific Ocean. Further rounds of heavy precipitation are expected to hit California on Saturday and again on Monday.

Scientists are not sure how climate change affects the likelihood that atmospheric rivers will crash into California’s coast in rapid-fire succession again. Scientists are studying whether global warming might be shifting the way winds carry moisture around the atmosphere.

When such storms are particularly severe or sweep through in rapid succession, they can deliver too much water too quickly to a state that has lately been parched by drought and scorched by wildfires.

“This is an extreme weather event, and we’re moving from extreme drought to extreme flood,” Karla Nemeth, the director of California’s Department of Water Resources, told reporters on Wednesday. “What that means is a lot of our trees are stressed. After three years of intensive drought, the ground is saturated and there is significant chance of downed trees that will create significant problems.”