In recent years, journalists and advocates have tried to capture the scope of the Bay Area’s homelessness crisis — a problem that often feels unfathomable in its depth and complexity.

Still, much of the discussion has centered on San Francisco, or on the efforts of individual cities throughout the region.

[Read about a debate over a homeless services center proposed for a waterfront location in San Francisco.]

Today, the Bay Area Council Economic Institute, the think-tank arm of a business group, is set to release a report that examines the issue through a regional lens.

“One of the things about the Bay Area is, it’s a wonderful place, but it’s very divided up,” Jim Wunderman, the council’s president and chief executive, told me. “We have 101 cities in nine counties around this very large bay and there’s no one city that dominates the landscape.”

But that isn’t how programs aimed at moving people into housing have been implemented, he said, even as more people in smaller suburbs find themselves in tenuous housing situations, and more people live out of their cars, which means they’re mobile.

The group wanted to explore ways to scale up successful programs and boost coordination among communities. To do that, Mr. Wunderman said, the group needed to better understand what was at stake.

• But the Bay Area has a relatively large percentage of homeless people without shelter (indicating there’s a shortage of subsidized housing, short-term shelters and transitional housing). That was 67 percent.

That’s compared with just 5 percent in New York and 47 percent in Seattle and King County. Once again, though, Los Angeles had the largest percentage of unsheltered homeless people: 75 percent.

• The analysis found that spending on services for people experiencing homelessness or people who were at risk varied widely across the region. Part of that stems from the fact that the costs to build vary widely.

For instance, the report said, building new permanently supportive housing costs $730,560 on average per unit in San Francisco County, compared with $393,580 per unit on average in Solano County.

However, Mr. Wunderman said that particular finding shouldn’t be taken as a sign that services, housing and emergency shelter should be concentrated in the least expensive parts of the Bay.

“We’re going to continue to need to develop programs locally,” he said. “I think this is a burden that has to be shouldered by everyone.”

Mr. Wunderman suggested one way to persuade communities to do their part: Tie state money to initiatives.

[Here’s what Californians said about our state’s housing affordability.] 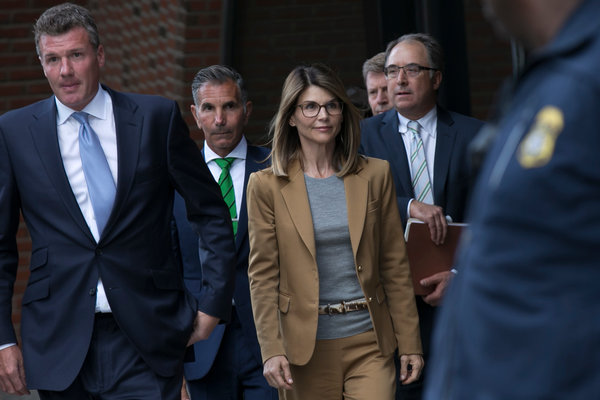 • A day after more than a dozen parents in the sprawling college admissions fraud case agreed to plead guilty, 16 others, including the actress Lori Loughlin, faced new money laundering charges. And now, another question is looming: Will any of them see time behind bars? [The New York Times]

• Not long after Representative Devin Nunes sued Twitter, Mr. Nunes sued the McClatchy newspaper chain for an article he said amounted to “character assassination.” His complaint was over an article about a lawsuit in which a server working on a cruise attended by top investors in a winery he part-owned said the party involved drugs and prostitution. [The New York Times]

• “The phenomena here is where life is transient, Facebook is not.” The social network said it would try to stop people from getting suggestions to wish their dead friends “Happy birthday.” [The New York Times]

• Three women in Los Angeles who said they were sexually assaulted by drivers pretending to work for Uber sued the ride-hailing giant, alleging that the company failed to adequately warn them about impostors. [NBC4]

• Are stories about assault involving Uber and Lyft drivers, or people posing as them, worrying you? Here are some tips to stay safe. [The New York Times]

• A $650 million Lacma renovation was approved on Tuesday. But the design by Peter Zumthor, which would shrink gallery space, has been controversial. [The New York Times]

• Richmond’s mayor pranked constituents on April Fools’ Day by saying that the Richmond-San Rafael Bridge would close and might need to be replaced. Then, after the bridge needed emergency repairs for the second time this year, a state legislator called to make the prank a reality. [Curbed San Francisco]

• In the wake of a disastrous season for the Lakers, Magic Johnson made the shocking announcement that he’d be stepping down as the team’s president. “I want to go back to having fun,” he said. [The New York Times]

• Here are some of the N.B.A. legend’s biggest moments while running the Lakers. [The New York Times]

• Another storied California basketball team got a new coach after a lengthy search: Cincinnati’s Mick Cronin will lead the U.C.L.A. Bruins. [The Los Angeles Times]

• The U.S. women’s soccer team thrashed Belgium in L.A. on Sunday. It’s still in the midst of a battle over pay equity, though the team has negotiated bonuses for match performances. [The New York Times]

It didn’t involve any high-level software hacking or Russian interference.

How’d they do it? They used their classmates’ default password format to sign in and vote for them, Berkeleyside reported. The scandal played out as students face intense pressure to rack up extracurricular activities for their college applications.

“I was just so angry,” Lexie Tesch, the junior who was ultimately — legitimately — voted student body president, told the news site. “I didn’t want people to lose faith in democracy because of this.”