(Want to get California Today by email? Here’s the sign-up.)

Representative Kevin McCarthy, the House majority leader, had hoped to become the House speaker next year. Instead, Mr. McCarthy, a California Republican, will be returning as the minority leader after Democrats seized control of the House.

No small part of the reason for this is that his 14-member California congressional delegation took a shellacking: Democrats picked up six Republican-held seats, out of seven on their target list. The latest Republican setback came Saturday, when The Associated Press declared that Gil Cisneros, a Democrat, had beaten Young Kim, a Republican.

Mr. McCarthy tried to avoid this, directing money to endangered candidates and engineering a voter initiative to repeal the state’s gas tax in a move to draw more Republicans to the polls.

But a big factor in the wipeout may be that Mr. McCarthy forced members of his delegation to, if you will, walk the plank on the Republican tax bill.

Whatever its other merits, the legislation proved costly for many California homeowners by capping the deduction for state and local taxes, which are famously high in California. Only two members of the California Republican delegation — Dana Rohrabacher and Darrell Issa, both of whom represent parts of Orange County — voted against the tax bill. Mr. Issa did not run again (he was replaced by a Democrat). Mr. Rohrabacher ran and lost.

Democratic candidates like Katie Porter, who defeated Representative Mimi Walters, an Orange County Republican, said she reminded voters at every turn that Ms. Walters had supported the tax bill.

“It’s a huge issue in the district,” Ms. Porter said over lunch a few days before Election Day. “She’s blown a $1.9 trillion hole in the deficit. People are very concerned about the cuts in Social Security and Medicare that that is going to prompt.”

Drew Godinich, a strategist for the Democratic Congressional Campaign Committee, said candidates like Ms. Porter were pressed to seize on the tax bill in speeches, advertisements and debates. They portrayed it as a Republican giveaway to corporations that would lead to cuts in Social Security and Medicare.

“Can’t underline how much that backfired on them here,” Mr. Godinich said.

(Please note: We regularly highlight articles on news sites that have limited access for nonsubscribers.) 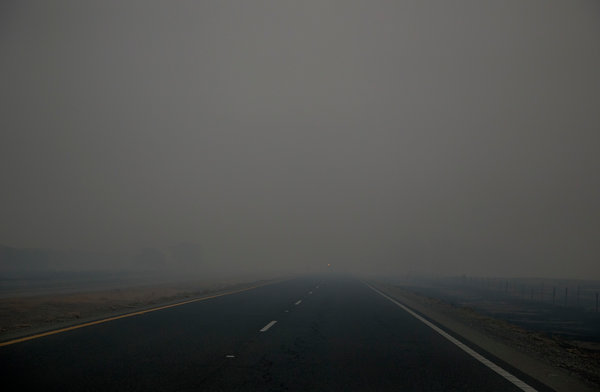 Fires Coverage From Across the State

• At least 77 people have died in the Camp Fire, making it by far the deadliest in California’s history. Trace how it started with this interactive map. [The New York Times]

• “I never thought I’d live in a tent city,” said a Marine Corps veteran who lost everything he owned in the fire and has joined a camp in a Walmart parking lot. “I mean, this is America; we’re not supposed to live this way. But here we are, man, the new normal.” [The New York Times]

• President Trump visited the fire zone on the weekend and suggested that forest management was a “very big problem” in California’s wildfire crisis. [The New York Times]

• Meanwhile, the world is shrinking as extreme weather makes less and less of the planet habitable. [The New Yorker]

• A Ventura couple’s home burned last year. They decided to rebuild — but they have to make the house more fire resistant this time. [The Los Angeles Times]

• Northern California’s air now ranks among the dirtiest in the world, alongside cities in China and India. And the broad trends that have made it so bad aren’t likely to reverse, researchers worry. [The New York Times]

• Here’s how to protect yourself from air pollution. (Hint: The best thing to do is stay inside, if you can.) [The New York Times]

• A woman working as a secretary at a federal prison in Victorville described her colleagues locking her in a solitary confinement ward so that inmates could see her as they masturbated. That’s just one story from a disturbing report on abuses women face while working in federal prisons. [The New York Times]

• Marriott Hotel workers in San Francisco said they would most likely continue to strike through Thanksgiving week. [San Francisco Chronicle]

• A Google Cloud executive who pursued a controversial Pentagon contract for artificial intelligence technology — a move that led to protests by employees — is stepping down. [The New York Times]

• They’re still not exactly bargains, but Bay Area home sellers are cutting prices at the highest rate in years. That could mean things are getting a little easier for would-be buyers in one of the nation’s most expensive housing markets. [San Francisco Chronicle]

• Mr. Trump took aim at Representative Adam Schiff, referring to him as “Little Adam Schitt” in a tweet on Sunday about the Mueller investigation and the acting attorney general. [The New York Times]

Coming Up This Week

• The Kansas City Chiefs will play the Rams in Los Angeles on Monday night, instead of in Mexico City, as planned. The game was moved because of poor playing conditions. Observers think it could be a really good game.

• Thursday is Thanksgiving, which means Friday is Black Friday. Here’s a cheat sheet of the products to track, and the ones to ignore.

Anderson .Paak, the genre-defying singer, songwriter, rapper and drummer, has followed up his 2016 breakout album “Malibu” with one named after his hometown: “Oxnard.”

The album, which was released last week, is an ode to the Ventura County city where he grew up, he told NPR’s David Greene.

On Saturday, The Ventura County Star reported that Anderson .Paak threw a carnival for locals, complete with cotton candy, hot dogs — and an appearance by his producer, Dr. Dre.

“Anderson, I feel like in my opinion, he’s putting Oxnard on the map to the world,” Dr. Dre said, according to The Star. “It reminds me of when I started, nobody knew where Compton was.”

The newspaper also got some choice video of Anderson .Paak teaching Mayor Tim Flynn of Oxnard how to dance.