(If you don’t already get California Today by email, here’s the sign-up.)

When Gov. Gavin Newsom began his first State of the State address yesterday, political observers expected him to attack the Trump administration.

So often, Mr. Newsom has described the president’s policies as standing in direct opposition to California’s values.

But instead, one of the most powerful politicians in the country quickly moved on from President Trump and took aim at the legacy of a fellow Democrat: Mr. Newsom’s predecessor, Jerry Brown.

“He dispatched Trump and Jerry Brown in very different ways,” said Raphael Sonenshein, the executive director of the Pat Brown Institute for Public Affairs at Cal State Los Angeles. “In Trump’s case, he dismissed him.”

Mr. Newsom covered a lot of ground in his 43-minute address, from the graying of California to immigration to the blockchain.

So my colleague, Jennifer Medina, and I broke down some key takeaways. (We’ll explore more questions in future newsletters; the state is vast and complicated, after all.)

Throwing the brakes on high-speed rail?

Perhaps the most surprising news to emerge from the speech was a major reversal on one of Mr. Brown’s signature projects.

“Let’s level about high-speed rail,” Mr. Newsom said. “I have nothing but respect for Governor Brown’s and Governor Schwarzenegger’s ambitious vision. I share it. Right now, there simply isn’t a path to get from Sacramento to San Diego, let alone from San Francisco to L.A.”

As an alternative, he called for finishing a bullet train route between Merced and Bakersfield. He also announced that Lenny Mendonca, his economic development director, would be the new chairman of the High-Speed Rail Authority.

“Merced, Fresno, Bakersfield, and communities in between are more dynamic than many realize,” he said. “At the end of the day, transportation and economic development must go hand in hand.”

That left a lot to unpack. Initially, there was some confusion about whether Mr. Newsom was calling for abandoning the full L.A.-to-the-Bay route. Capital Public Radio reported that he was simply “reprioritizing.”

Regardless, Bill Whalen, a fellow at the Hoover Institution at Stanford University who was a speechwriter for former Gov. Pete Wilson, said that in a certain way, the move was a show of the power of a leader in one of the safest political jobs in the country.

And, Mr. Whalen added, charging forward on a segment of the route that has seen its share of controversy will also force Mr. Newsom’s administration to think more broadly about economic development in the Central Valley, a part of the state that hasn’t seen the kind of influx of business or wealth as cities like San Francisco or L.A. 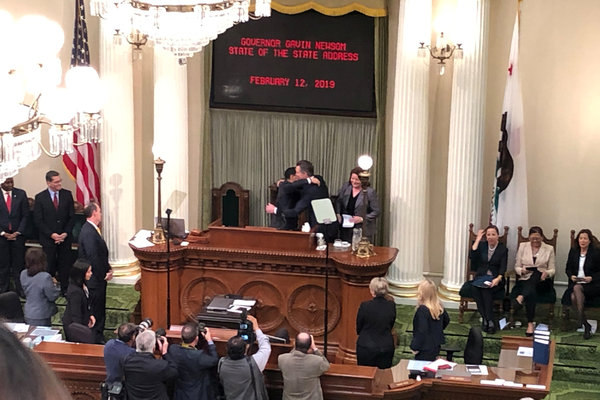 It wasn’t new that Mr. Newsom disagreed with his predecessor’s approach to moving water out of the Sacramento-San Joaquin River Delta and delivering it to users south — a complicated, controversial project involving twin tunnels.

But in Tuesday’s speech he dealt the plan a big blow.

“I do not support the twin tunnels,” Mr. Newsom said. “But we can build on the important work that’s already been done. That’s why I do support a single tunnel.”

Mr. Newsom went on to underscore the stakes by talking about access to clean drinking water, which has long been a struggle for many parts of the Central Valley, where wells that have served small, rural communities far away from larger water systems have been running dry for years.

“Just this morning, more than a million Californians woke up without clean water to bathe in or drink,” Mr. Newsom said. “This is a moral disgrace and a medical emergency.”

“California should never be a place where only the well-off can lead a good life,” Mr. Newsom said.

A nice sentiment, but as the governor pointed out, 61 percent of young adults in California say they can’t afford to live here and housing is “perhaps our most overwhelming challenge right now.”

Placing the blame on local governments for not doing enough planning or outright refusing to build, Mr. Newsom said he was setting aside a $750 million incentive package for local communities to update their housing plans and revamp zoning procedures.

Last month the governor filed a lawsuit against the city of Huntington Beach, and on Tuesday he said there were 47 other cities in the state that were not abiding by state requirements.

Mr. Whalen said that coming down on local governments — a tough proposition in a lot of states — is “a smart fight to pick.” The governor is a former mayor and is on the more popular side of that argument, he said.

After Los Angeles teachers went on strike last month, attention turned to Sacramento. Now, the question is what the state will do to address what the governor called the underlying problems: “Understaffed schools, overcrowded classrooms, pension pressures, the achievement gap, and charter school growth.”

“We’re still 41st in the nation in per-pupil funding,” he said. “Something needs to change. We need to have an honest conversation about how we fund our schools at a state and local level.”

But Mr. Newsom did not mention what many see as the root cause of the chronic funding crisis: Proposition 13, the state’s property tax law.

Listing charter schools among the problems was another departure from Mr. Brown’s views.

Mr. Newsom’s push back against charter schools aligns with a broader shift away from Democrats’ previous embraces of the charter school model.

Here’s what else we’re following today

(We often link to content on sites that limit access for nonsubscribers. We appreciate your reading Times stories, but we’d also encourage you to support local news if you can.)

• California’s records on police shootings have long been hidden. Now a fight over a new transparency law is playing out in court. [The New York Times]

• Since the Parkland school shooting in Florida, teenage journalists have teamed up with The Trace, The Miami Herald and McClatchy newspapers to profile some of the 1,200 American kids killed by guns. And reporters have sought to understand why Stanislaus County has the second most youth gun deaths in the state. [The Modesto Bee]

• L.A. County supervisors voted to replace the dungeonlike Men’s Central Jail with at least one mental health treatment facility in its place. [The Los Angeles Times]

• The Mexican crime lord known as El Chapo, whose trial has drawn big interest in the U.S., was convicted on all counts and faces life in prison. [The New York Times]

• An intense “atmospheric river” storm was set to start pummeling the Bay Area. [The Mercury News]

We’re continuing with our tiny California love stories today. Here’s a memory of a fleeting but romantic encounter from Aly Pitts:

November 2015. Solo trip down the P.C.H. Fresh seafood, cocktails, and spirited conversation in Morro Bay with solo travelers. One was a man escaping the rat race of L.A. Surrounded by darkness, as the power went out from a bird that flew into a transformer, we moved on to the next bar. A woman was playing the violin by candlelight. The man from L.A. passionately kissed me and told me he loved me before we parted ways at the end of the night. We didn’t exchange information. I don’t remember his name, but I remember every detail of that night.