The good news for residents of Northern California — which has been battered this week by historic rain and flooding that has been blamed for at least one death — is that the worst is most likely over.

The swollen Russian River, which essentially turned the town of Guerneville into an island, is forecast to recede in the next day or two, returning to below flooding levels by early Friday morning, said Scott Rowe, a National Weather Service meteorologist.

The bad news is that these kinds of severe storms are likely to get more frequent, as climate change contributes to what experts say will be a future marked less by gradual, steady warming than by a kind of weather whiplash.

That’s how Daniel Swain described it, when I spoke with him recently. He’s the California Climate Fellow for the Nature Conservancy, a researcher, and the expert behind the Weather West blog.

I initially wanted to talk to Mr. Swain about wildfires — their increasing severity and frequency — but, he explained, fire and rain and floods are part of climate cycles that are becoming more extreme.

“The average condition doesn’t characterize what you experience,” he said.

An average over years doesn’t capture the real effects of a devastating drought and wildfires followed closely by a particularly wet rainy season on environments and communities, which are increasingly being built into wilderness areas.

As a result, Mr. Swain said, Californians end up dealing with “the worst of both worlds.”

The question then becomes: How do you manage land use to minimize harm from extreme weather? Is it possible to store water when it rains and save it for when the state is wracked with drought?

It would be simple to, say, return it all to its natural state. Rip out the concrete in the Los Angeles River, let wildfires burn what they will, never allow construction where there’s any risk of disaster.

But Mr. Swain said it’s impossible to ignore the presence of humans or to discount the value of communities that have already been built — even if they coexist with the environment imperfectly.

Going forward, he said, there are opportunities to build more sustainably, and for policymakers to think carefully about managing things like groundwater.

For now, though, Mr. Rowe, of the National Weather Service, said that another storm could be heading toward the Central Coast next week. 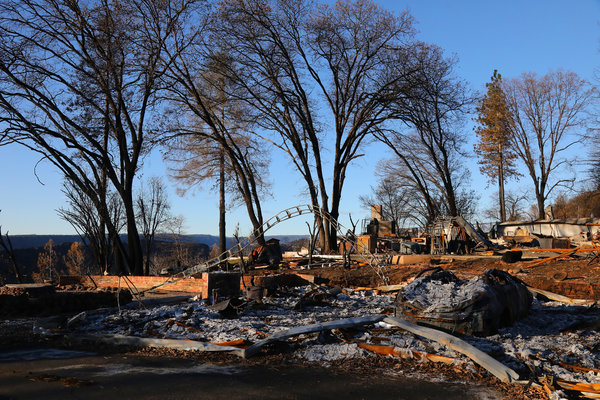 • After months of speculation, Pacific Gas & Electric said it “believes it is probable that its equipment will be determined to be an ignition point of the 2018 Camp Fire,” the state’s deadliest blaze. The troubled utility filed for bankruptcy protection in January in anticipation of claims from the fire. [The New York Times]

• A judge ruled that the notorious Mongols motorcycle club would not have to give up the rights to its trademarked emblem, saying that an earlier ruling violated the group’s First Amendment right to free speech. [The New York Times]

• “I’m not an act,” Zlatan Ibrahimovic, the Los Angeles Galaxy’s star striker, declares as he begins his second season in Major League Soccer. “I am the real deal.” [The New York Times]

• The 10-campus University of California system is canceling its subscriptions through Elsevier, one of the world’s biggest academic publishers, after months of negotiations. While open research access advocates are calling it a win, it could pose challenges for professors. [The Chronicle of Higher Education]

• Gap, which was started and is based in San Francisco, is spinning off Old Navy into a separate public company after a dismal year. [The New York Times]

• A black man from Moreno Valley recently became the leader of one of the nation’s largest neo-Nazi groups. Court documents show he’s planning to dismantle it. [The Associated Press]

• Here are the restaurants and chefs up for James Beard awards in the Bay Area. [Eater San Francisco]

• Here are the restaurants and chefs up for James Beard awards in the Los Angeles area. [Los Angeles Magazine]

• “I have a total of over 50 years in law enforcement. It’s a case that has never lost my thought.” Five men went missing under strange circumstances in rural Yuba County one night in 1978. Four bodies were found. [The Sacramento Bee]

• “It’s entirely possible that we’ve spent the last 26 years preparing for a moment like this — for somebody to lay it all out, graphically, frankly.” Michael Jackson cast a spell. The documentary “Leaving Neverland” shatters it, Wesley Morris writes. [The New York Times]

On Tuesday, Times journalists including Jamelle Bouie, an opinion columnist, will join artists at San Francisco’s Yerba Buena Center for the Arts in honoring those profiled as part of the “Overlooked” series: Artists and Journalists Honor the Remarkable. A discussion will be moderated by Lauretta Charlton, who edits the Race/Related newsletter. [Tickets here]

I’m heading to San Diego this weekend, which feels like a real stroke of luck, in light of this week’s recommendation from Tejal Rao, The Times’s California restaurant critic. But even if you’re far away, take this as an invitation to treat yourself to your favorite pastry:

Crystal White’s San Diego bakery Wayfarer Bread & Pastry has such delicious baked goods that I had to visit two days in a row to taste as many possible. It started with a morning bun — a swirl of crisp, buttery dough with a soft, sticky center of honey cream and candied kumquats — and a rich, almost fragile chocolate-cherry scone.

Later I got a sourdough and a loaf of seeded rye to bring home and I felt something like pangs of jealousy for the locals who can visit regularly enough to taste the delicious, weekly shifts in the menu, or pop by casually for mortadella pies on pizza night. On the long drive home, I consoled myself with one of Wayfarer’s huge, tender chocolate chip cookies, which I’d stashed away in my purse.