More than two million residents in Northern and Central California face having their power supplies cut off in the largest planned power outage in the region, aimed at preventing the spread of wildfires.

The state’s largest utility, Pacific Gas & Electric, said it has notified customers in 36 counties that it may cut power on Saturday night until midday on Monday, as forecasters predicted the strongest winds in years across the region.

The wildfires have already forced tens of thousands of people to evacuate their homes and destroyed dozens of buildings in the wine country of northern California and in subdivisions on the outskirts of Los Angeles.

California was under extreme fire danger like it had probably never seen before, Emergency Services Director Mark Ghilarducci said.

At least 50,000 have fled their homes in the foothills north of Los Angeles, with winds of up to 40mph fanning the flames and creating huge plumes of smoke in the Santa Clarita area.

At least six homes have been destroyed, and officials said the number is expected to rise. 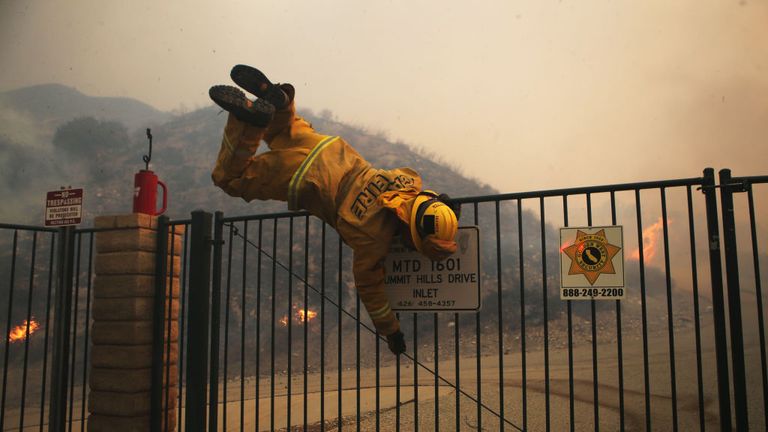 In the state’s upmarket wine country in Sonoma County, 2,000 people were ordered to evacuate after a damaged electricity tower sparked a fire.

Pacific Gas and Electric Co admitted one of its transmission towers had malfunctioned at about the time and location of the fire’s origin on Wednesday night.

The Sonoma blaze – known as the Kincade fire – has affected around 10,000 acres.

The fire near Geyserville, famous for its nearby hot springs, has burned at least 49 buildings and 34 square miles, prompting evacuation orders for some 2,000 people. 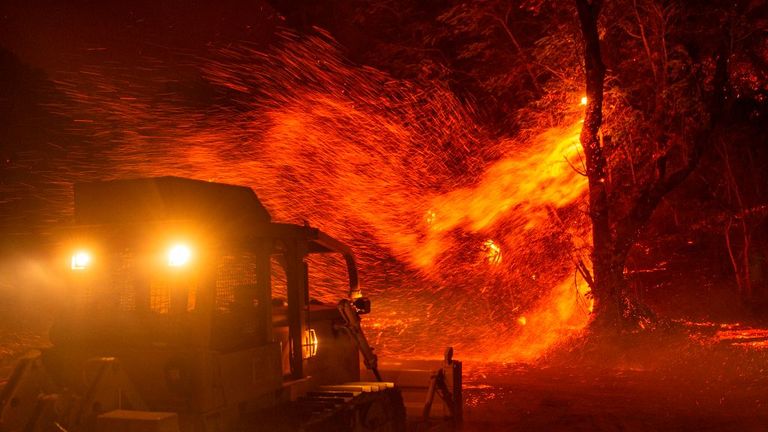 “I just visited a number of structures that were destroyed,” said Governor Gavin Newsom, who declared a state of emergency. “Familiar sights to all of us, devastating sights to those impacted lives literally torn asunder.”

No immediate casualties have been reported.

Two years ago, 44 people died in wildfires in the same area of Northern California.