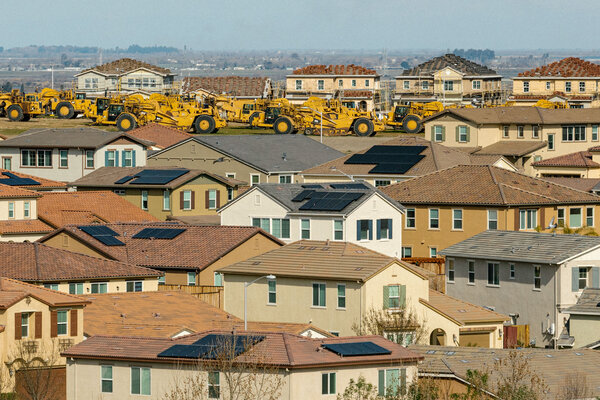 No matter where you live, you’re probably familiar with the exorbitant cost of housing in California.

The state’s median home price has crept above $800,000, more than double what it is nationwide. Among the 50 biggest cities in the country, we’re home to the top four most difficult places to afford a mortgage. And half of all Americans experiencing homelessness live in California.

Our housing crisis has a seemingly simple solution, according to the laws of supply and demand: Build more housing.

But for decades, resistance from suburban homeowners has stalled development as the problem has only gotten worse.

Though the bills, Senate Bills 9 and 10, endured intense opposition in recent months, neither is all that revolutionary, said Conor Dougherty, a reporter for The New York Times who writes about economics in California.

But the package of housing reforms passed in California over the past four years, including these two latest measures, “is probably the biggest change in housing in 50 years or more,” Conor told me.

What the new laws will do

S.B. 9 allows duplexes to be built in most neighborhoods across the state, including places where apartments have long been banned. S.B. 10 reduces environmental rules on multifamily housing and makes it easier for cities to add high-density development.

The former has been the more controversial proposal, spurring angry opposition from homeowners and local government groups who have called it “the beginning of the end of homeownership in California.”

The classic California suburb — rows of houses, each with their own yard and fence — is largely a product of something called single-family zoning, a regulation that dictates that there can be only one house per parcel of land. These laws prohibit, say, building a high-rise in a residential cul-de-sac.

S.B. 9 essentially ends single-family zoning, but with a modest shift: Under the bill, property owners can build up to three additional units on their land, allowing single-family homes to be transformed into as many as four units.

A recent analysis by the Terner Center for Housing Innovation at University of California, Berkeley, found that S.B. 9 would most likely lead to 714,000 new homes across the state over the next several years.

What previous housing laws did

Though symbolically significant, S.B. 9 may not actually be as impactful as changes to housing policy that have already been enacted, Conor told me.

State lawmakers have been passing numerous housing reforms over the past four years in an effort to boost housing production. (Gov. Jerry Brown signed 15 housing bills in 2017, and Newsom signed 18 in 2019.)

Perhaps most significantly, California in 2017 relaxed laws to make it easier for homeowners to convert and rent out accessory dwelling units, the technical term for backyard homes — think “granny flats” or “in-law apartments.” Those rules have been further loosened since.

So even before S.B. 9 appeared on the scene, homeowners in California were allowed to have two units on a single-family lot — a main house and a separate guesthouse.

As these backyard dwellings continue to pop up, “people are going to complain that S.B. 9 is ruining their neighborhoods, when in fact they are actually unhappy about laws that passed semi-quietly several years ago,” Conor told me.

Newsom can now take the housing crisis into his own hands.

Nowhere in America do homes sell for more over asking price than in Berkeley.

For days, a wildfire in Central California has been threatening groves of ancient sequoias, some of the oldest trees in the world. Firefighters have even swaddled trees in Sequoia National Park in aluminum wrap to protect them from the blaze.

As of Sunday evening, flames had reached multiple groves containing trees older than 2,000 years old, reports The Associated Press. General Sherman, the world’s largest tree by volume, was believed to still be safe.

Newsom’s family: Gov. Gavin Newsom is “following all Covid protocols” after two of his four children tested positive for the coronavirus.

Emmys: The 73rd annual Emmy Awards were held on Sunday night in Los Angeles. See the complete list of winners.

Antibody testing: An upscale health care practice in Beverly Hills has a drive-through where clients can get their Covid-19 antibody levels tested. Both the ethics and the efficacy of these tests are up for debate.

Republicans after recall: California Republicans thought they had found a rallying cry in the recall attempt against Newsom. But instead, the campaign exposed clashes between the party’s establishment and grass-roots base, reports The Los Angeles Times.

Recall results: Once a Republican stronghold, Orange County voted against recalling Newsom. The county’s seesawing has consequences far beyond its 3.2 million residents.

Also, this map from The Los Angeles Times allows you to see voting results by neighborhood in Orange, Los Angeles, San Diego and Ventura Counties.

Robert Durst: The onetime heir to a Manhattan real estate empire was found guilty on Friday of the murder of a close confidante in Beverly Hills.

West Nile: Los Angeles County health officials have reported the county’s first death this year due to West Nile virus, according to The Los Angeles Times.

Covid outbreak: A coronavirus outbreak at a jail in Monterey County has caused cases among inmates to quadruple in less than a week.

Red flag warning: Officials warned of increased fire danger in much of Northern California from late Sunday night through Monday evening. The affected area includes portions of the Sacramento Valley and some of the Bay Area, The Sacramento Bee reports.

Theranos trial: A “concerned citizen” at the trial of the Theranos C.E.O. Elizabeth Holmes turned out to actually be the father of Holmes’s partner, reports NPR.

Oakland officers disciplined: Nine Oakland police officers who engaged with a racist and sexist Instagram account have been given unpaid suspensions, according to The San Francisco Chronicle.

Illegal pot farm: The authorities investigating a man found dead with a gunshot wound uncovered an illegal pot farm near the Forbestown area in Butte County, The Associated Press reports.

Today’s travel tip comes from Shelle McKenzie, a reader who recommends Avila Beach on the Central Coast. I’m seconding this suggestion — it’s one of my favorite places to stop while driving between Los Angeles and the Bay Area.

Tell us about where to visit in California. Email your suggestions to [email protected] We’ll be sharing more in upcoming editions of the newsletter.

Between the wildfires, pandemic and drought, this summer in California hasn’t been easy.

So with Sept. 22 marking the end of the season, I’m asking for you to share what has helped you make it through. Maybe it was a vacation you had postponed, a trashy TV show, a delicious meal you cooked or your nightly stroll.

Email me your favorite summer memory at [email protected] along with your name and the city where you live. If you want to include a picture, please make sure it’s oriented horizontally.

This week, a school in the Bay Area will be renamed after the oldest national park ranger in the country.

Briana Scalia and Mariel Wamsley contributed to California Today. You can reach the team at [email protected].