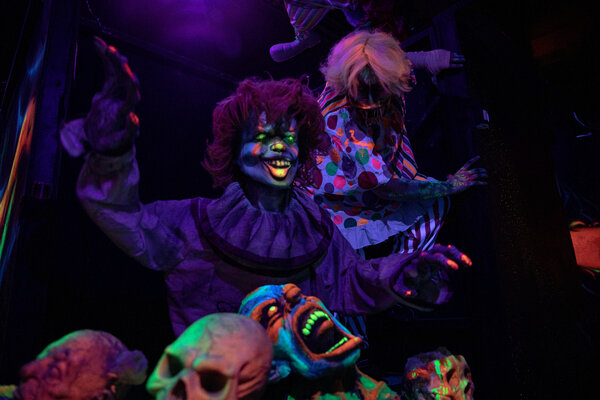 On an unassuming block of Broadway in Lower Manhattan earlier this month, Sammy Mena finally went back to work. Some people on the sidewalk strolled past without a second glance, some with a shriek. A little boy clutched his mother’s hand tightly as they walked by, his eyes widening above his oversized surgical mask.

New Yorkers aren’t used to interacting much with strangers lately, particularly not a stranger in character as a gore-streaked, homicidal clown.

The haunted house known as Blood Manor reopened to the public for a Halloween season unlike any in its 17-year history. Mr. Mena, who has worked there since 2007, has earned the plum gig of doing his scaring outside, targeting unsuspecting pedestrians and patrons waiting in line.

He was clearly enjoying the discomfiting effect his staring and stalking had on passers-by, especially under the present circumstances. “Everybody’s been locked up,” he said. “It’s nice to have someplace to go, get out of the house and make somebody cry. Because — woo! — I’ve made people cry.”

The pandemic is a crisis for the haunted-attractions industry, which is fighting to survive this Halloween. After all, the traditional conception of a haunted house is a nightmare for perhaps no one more so than an epidemiologist: Potential super-spreaders crowded together in questionably sanitized indoor sets, screaming out untold droplets within inches of strangers’ faces.

and in some places, like Los Angeles and all of Illinois, they are prohibited. But in New York, while Broadway and movie theaters remain shuttered, haunted houses are considered “low-risk indoor arts and entertainment” (like museums or aquariums) by the state Department of Health. They are permitted to operate, provided they do so at 25 percent of maximum occupancy, and with mandatory face coverings and social distancing between patrons and employees. 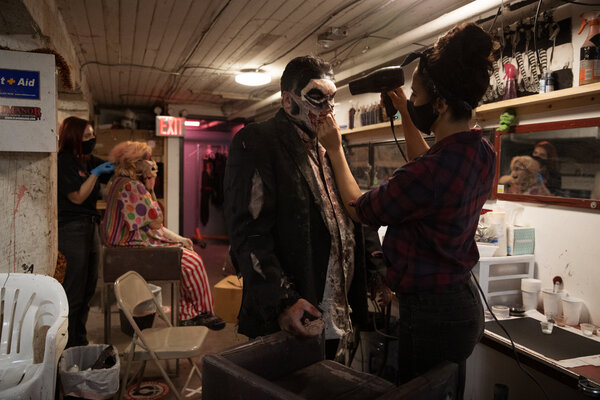 To make this season work, Blood Manor’s owner, Jim Lorenzo, brought on a pandemic consultant, Nick Perrotta, in August. Together, they put in place wide-ranging safety protocols, including Covid-19 screening questionnaires and temperature checks at the door, frequent disinfection of surfaces, designated half-hour time slots for ticket sales, and a strict limit of one group per room within the haunt.

According to Mr. Lorenzo, the attraction’s ventilation system now benefits from germ-killing UVC lights within the ducts and increased airflow. The air within Blood Manor, he said, will be entirely replaced with fresh outdoor air every 15 minutes.

“It’s going to be as safe,” he said, “or safer, than being on an airplane or in a school.”

But these front-of-house and behind-the-scenes changes are only the beginning: How do you protect customers while simultaneously encouraging them to believe, if only for a moment, that their lives are in grave danger? That’s what they’re paying for.

Blood Manor this season has fewer live actors but plenty of fog, atmospherically unpleasant smells (there’s a robust market in the industry for ‘eau de vomit’), “over-the-top” sound effects (some as loud, Mr. Lorenzo said, as a fire engine’s siren), and 25 percent more animatronics than usual.

“I have two experts that do nothing but make things move, jump, spit,” Mr. Lorenzo said. (The spit is really “just water,” he added.) He is especially proud of a 10-foot-tall werewolf, which roars through a 350-watt speaker: “He comes out of the darkness and people just wet their pants.” (That is not a metaphor. In years past, guests who claimed to have lost control of their bladders at Blood Manor were awarded free T-shirts advertising that they had, well, lost control of their bladders at Blood Manor.)

There is hardly an area of the haunt that the new socially distant horror paradigm hasn’t touched. During a press preview in early October, among the jugs of fake blood in the makeup station were just as many spray bottles of bright-blue disinfectant. Janelle Mercado marshaled performers to their assigned posts — in the black-light maze, perhaps, or the morgue — and helped ensure compliance with health regulations. After more than five years in the cast, Ms. Mercado has been promoted to assistant director. She is well prepared, as evidenced by the contents of the full pockets of her Blood Manor hoodie: Band-Aids, hand sanitizer, an infrared thermometer gun.

This season is certainly not what she expected. “But honestly, you’ve got to make ends meet, you know?” she said. “You’ve got to work, especially because the city might be shutting down again.”

Ms. Mercado’s mother was hospitalized with Covid-19 for two weeks in late March and April, but has recovered. Ms. Mercado is anxious about the possibility of exposing her own 5-year-old daughter to the virus, but she trusts that her co-workers will do their part to keep one another safe. Blood Manor asks its employees to get tested for Covid-19 once a week. “We’ve always had each other’s backs,” said Ms. Mercado, as she dispatched a monster-in-progress into the glow-in-the-dark airbrushing room. “We know that we’re a family.”

Across the cluttered, cavernous basement that serves as Blood Manor’s backstage, an escaped prisoner, a ghost bride and other miscellaneous ghouls waited patiently in line — stickers on the floor at six-foot intervals — to be fitted for custom silicone half-masks. Each set of fangs or monstrous grin contained a piece of fabric, covertly attached with Velcro inside, to cover the wearer’s mouth and nose. A few performers wore familiar paper surgical masks, albeit spattered with blood flicked off a red-dipped paint brush. (It should be noted that there will be no pandemic-themed scares at Blood Manor. “We don’t want anybody to think about the actual horrors that have been going on,” said Angie Hansen, the creative director.)

Though it was never a full-contact haunted house, Blood Manor nevertheless trafficked in plenty of reliably effective close-up scares in previous seasons. For example, Mr. Mena, the blood-soaked clown, used to relish gibbering softly into an unsuspecting victim’s ear, or inviting a guest to prod his prosthetic eye with a fork Mr. Mena wears on a chain around his neck.

Violating visitors’ personal space is no longer an option. Blood Manor’s actors may come within six feet of guests, but only in passing, Mr. Lorenzo said. So Ms. Hansen has coached the cast to develop new scare tactics that are effective at a distance, by delving deeper into character development, or exploring strange and unexpected movements.

“I just hired this one new actor who crab-walks backwards,” Ms. Hansen said. “I’m like, ‘Can you do that for eight hours?’ And she’s like, ‘Yeah.’ It was like, ‘OK!’ As soon as some girl crab-walks at you, you’re probably going to get out of the way pretty quick.”

This year’s cast is almost exclusively composed of veteran actors, like Mr. Mena, who still wears the fork — only now he does the eye-prodding himself. “Once we got the email that we’re going to open, I was like, ‘Hell, yeah,’” Mr. Mena said, adding, “I’m smiling under this mask.”

Despite coronavirus concerns, the Haunted Attraction Association says approximately 80 percent of haunted attractions are operating this season. Surprisingly strong ticket sales in the first days of autumn in much of the industry suggest Americans are eager for an escapist scare. “Early numbers are astounding,” said Brett Hays, president of the Haunted Attraction Association and owner of the Fear Fair in southern Indiana.

“Our guests are saying, ‘We can’t go to a high school football game, we can’t go to the movies, there’s nothing else out there,’” said Patrick Konopelski, past president of the Haunted Attraction Association and owner of Shocktoberfest near Reading, Pa. “It’s like we’re providing a community service.”

Despite these promising beginnings, haunters are bracing for ultimately disappointing returns. Haunted attractions typically earn most of their revenue over four days, thanks to a spike in attendance the last two weekends before Halloween. But this year, they’re necessarily operating at a lower capacity to maintain social distancing. “We simply won’t be able to entertain the number of people that will want to come on those days,” Mr. Konopelski said. “We can’t.”

Take Blood Manor: This season, the 10,000-square-foot attraction will limit entrance to 100 guests per hour. In a normal year, as many as 2,500 guests might come through Blood Manor’s doors on a busy Saturday. This Halloween (also a Saturday), Mr. Lorenzo hopes to attract 700 visitors in the seven hours it will be open.

Some New York haunts, like Gateway’s Haunted Playhouse in Bellport and Headless Horseman Hayrides and Haunted Houses in Ulster Park, are offering drive-through haunted experiences, in which patrons will be tormented from within the relative safety of their cars. Others have opted not to operate at all.

The Gravesend Inn, staged annually at CUNY’s New York City College of Technology in Downtown Brooklyn, attracted more than 5,000 visitors last year. Styled as a haunted 19th-century hotel populated by the lost souls of bellhops and chambermaids, the Gravesend Inn is a high-tech, low-gore walk-through experience put together for course credit by City Tech students, who operate its many motion-triggered animatronics, light and sound effects, props and scare-capturing video cameras, and also work the box office and act as the resident spirits.

Several students have told Susan Brandt, associate professor of production management in entertainment technology at City Tech and general manager for its resident Theatreworks company, that visiting the Gravesend Inn was what inspired them to attend City Tech in the first place.

The Voorhees Theater, the campus facility where Gravesend Inn is staged, remains closed this semester. There will be no haunted hotel this year.

“We don’t want to be on the map as somewhere that a lot of contagion went out, especially being in Brooklyn,” Ms. Brandt said. Some of her students have been ill; others lost family members to Covid-19. To run the Gravesend Inn during a pandemic, she said, would be “reckless and irresponsible.”

But will it still be frightening? There’s reason to think so. Back out on Broadway, a group of maskless teenagers riding their bikes on the sidewalk paused in front of Mr. Mena. “Halloween’s not here yet,” the boldest young man teased.

Just then, Mr. Mena’s colleague Roy Womble, costumed as a zombie in a security-guard jumpsuit, lumbered into the teenager’s sightline with an expertly timed groan from between his rotten teeth.