It started out with a soft launch: a snippet of Dante de Blasio supposedly giving his father some tongue-in-cheek advice before he stepped on the presidential debate stage. It did not land particularly well.

Then he published an op-ed he had written a few years earlier about his interactions with the police as a young black man, and how his father, Mayor Bill de Blasio, instructed him to be cautious.

Now, Dante is ready to pitch in full time: He is joining the de Blasio presidential campaign as a paid policy analyst.

“I’ve always loved politics, love learning about it, love being involved in it, and this campaign seemed like a great opportunity to get more involved in the world,” Dante said on Friday at the de Blasio 2020 campaign headquarters at The Yard, a shared working space in Gowanus, Brooklyn.

“And,” he noted dryly, “my dad’s running for president.”

Dante, who graduated from Yale in May with a political science degree, is scheduled to make his campaign debut in Iowa Saturday, appearing with his father at public events such as barbecues and parades, interacting with voters and possibly introducing his father at some functions.

In addition to helping to write a campaign platform, Dante, a championship debater, will also help his father prepare for debates.

The hope is that Dante, along with his mother, Chirlane McCray, can provide a personal touch and a boost to the mayor’s struggling presidential campaign — much as he did at age 15, when he and his giant Afro starred in an advertisement that is credited with helping to elevate Mr. de Blasio from a middling mayoral candidate to the eventual victor.

“We’ve been through elections before as a family, and we know how difficult they can be,” Dante said. “But my dad was quite clear that we were not going to do this unless everyone was on board and felt good about his message.”

After months of publicly mulling a run while traveling to early primary states, followed by two months on the campaign trail, Mr. de Blasio is still polling at 1 percent or less in his pursuit for the Democratic nomination. And the media is still questioning why he decided to run.

Mr. de Blasio met the qualifications to make the first Democratic debate last month and impressed some onlookers with his performance.

He pushed his way into questions, stood up for immigrants, focused on his message of fixing income inequality, and cast himself as a progressive executive who has already accomplished goals such as universal prekindergarten in the largest city in the country.

But the day after, he stumbled during a rally in Miami by quoting Che Guevara, the Cuban revolutionary, who is despised among Cuban-Americans there.

If Mr. de Blasio had won any momentum from the debate, the Guevara stumble seemed to stop it cold. But his son said people would be mistaken to count his father out.

“It’s definitely a difficult situation but I have no doubt that he can make a name for himself, even in this crowded field,” Dante said. “He’s proven over the years and multiple elections that he can fight his way up as an underdog.” 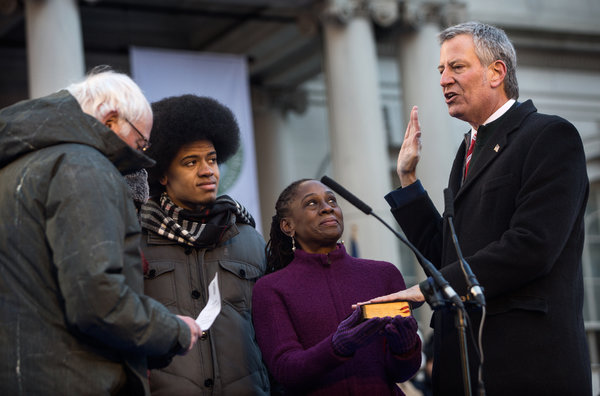 Dante, looking relaxed after a month and a half traveling in Southeast Asia with friends, was dressed in black slacks and an untucked blue button down dress shirt. The Afro is giant no more and the baby face from the 2013 political ad is gone.

“I expressed interest and they said we’d love to have you,” he said about joining the campaign. 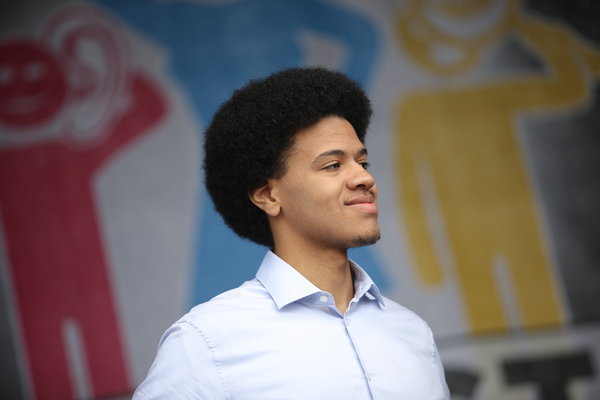 He says he’ll be getting paid (“I appreciate it”) and will report to Jon Paul Lupo, Mr. de Blasio’s campaign manager.

“Having smart, young people on the campaign is great,” Mr. Lupo said.

Dante said he has a few ideas about what his father could do to make more of an impression in the crowded field of Democratic candidates.

“He needs to talk a lot more about how his experience in New York translates nationally,” he said. “It’s easy for all of his achievements to get lost given that a lot of candidates are talking about progressive issues now.

“But I think he’s the only one that can say, ‘I believe in these progressive causes, I’ve accomplished them legislatively and here’s how they can be translated to a national stage,’” he added.

Mr. de Blasio has already been making use of his family on the campaign trail; Ms. McCray has traveled extensively with her husband to early primary states such as Iowa and New Hampshire. This weekend, she will be on her first solo trip to South Carolina, appearing at meet-and-greets and speaking at a church.

Dante’s sister, Chiara, will not be joining the campaign; Dante said that she is busy working and has her own life.

“For Chirlane and me, it will be joyous to share this journey with our son,” Mr. de Blasio said in a statement.

Those who know Mr. de Blasio said they are not surprised that his family is heavily involved in his presidential campaign.

“From everything that I’ve seen, his family is very important to him and he’s close to them,” said Richard Buery, a former deputy mayor for Mr. de Blasio. “We see that in the role Chirlane plays in his administration, and some of his key initiatives come from his experience as a dad.”

So when Dante writes about fearing an interaction with the police, “for the mayor, it’s not a talking point, it’s something that is driven by his experience,” Mr. Buery said.

Dante said he wasn’t ready to share the op-ed piece when he wrote it a couple of years ago, but felt more comfortable now.

“I think my father has done a very, very good job reforming policing in this city,” he said. But he added: “It’s important to have these critiques to push politicians further, and it’s definitely not good to rest easy, even though you’ve done some good things.”

As to whether he’ll have the same impact as in Mr. de Blasio’s first mayoral race, Dante said he was unsure.