Eric Alarcon, who will be 4 next month, has autism. He can say a few words and identify a variety of dinosaurs. He lives with his parents in Secaucus, N.J., a 10-mile drive from Midtown Manhattan.

Eric and his peers in a special-education class have had about 100 hours of in-person instruction in the first eight months of the school year.

Five miles away in Rutherford, a neighboring New Jersey town, young children with autism have spent more than 700 hours in class since September.

The two towns, hugging opposite sides of the Hackensack River, have nearly the same number of residents and educate about the same number of students. Each is in a county that has struggled with similarly high rates of coronavirus cases.

But as has happened across the country, the districts made radically different choices about whether and how to reopen public schools during the pandemic.

“Virtual learning has done nothing — nothing — for my son,” said Eric’s father, Reuben Alarcon, 36.

Remote learning has been challenging for many students, including those who need more help because of disabilities. Perhaps nowhere is the strain of remote learning more acute than among the youngest, highest-need students, whose ability to access in-person early intervention classes, targeted behavior analysis and speech therapy is considered key to their academic success.

“Early, intensive relationship-based work is essential for children with autism,” said Gerard Costa, the director of the Center for Autism and Early Childhood Mental Health at Montclair State University.

“We know the early years are critical,” he added.

Mr. Alarcon, part of a group of parents who have criticized the Secaucus Public School District’s reopening policies, said he was worried that the educational opportunities Eric lost during a crucial year of brain development would cause lifelong harm.

“He will sometimes use one or two words to ask for something. Sometimes he surprises us and he blurts out a sentence,” Mr. Alarcon said. “He would be so much more ahead had he had the full-time class.”

Secaucus parents say they were told that classrooms were not large enough to safely fit all special-education students at once, leading officials to split classes into two time slots. The school superintendent, Jennifer Montesano, did not respond to calls and emails seeking comment.

The youngest, most disabled students in Secaucus were in class for one hour and 40 minutes, four days a week, from September through late October. As virus cases began to spike in New Jersey during the fall, all Secaucus schools were closed for four months before reopening for hybrid instruction March 8.

Last week, Secaucus elementary schools expanded in-person instruction to five half days per week, and class time for the most severely disabled students increased to four hours a day.

But Rutherford’s public schools have been open five full days a week since September for most elementary students, including the most disabled students, according to the superintendent, Jack Hurley.

“We have no idea why two towns so similar in so many ways can operate so completely at odds with one another,” said Ruby Kish, a lawyer and mother of two who leads the Secaucus Special Education Parent Advocacy Committee. 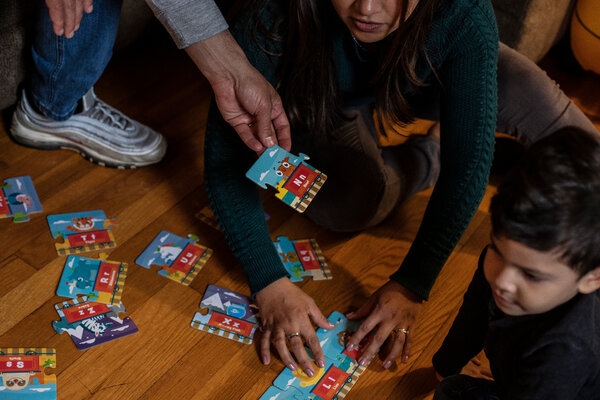 The president of the Secaucus Education Association, the town’s teachers union, which has raised public health concerns about in-person learning, did not return repeated requests for comment.

But about a week before the town’s schools reopened in September for hybrid instruction, Nancy Lynch, who was the union’s president at the time, told the Board of Education that her members believed that all-virtual classes were the “safest option for the students and teachers.”

New Jersey’s governor, Philip D. Murphy, a close ally of the New Jersey Education Association, the statewide union, initially gave districts wide latitude in deciding how and when to reopen.

A Democrat running for re-election, he has since encouraged schools to reopen more fully, citing relatively low virus transmission rates in schools and the availability of vaccines for adults. All schools, he has said, should be open all day for all students in September.

Union leaders have argued that districts needed to be able to make individual choices based on the differences in the age and condition of school buildings, as well as the fast-changing virus rates.

Carrieann DeVito, director of special education services for the Secaucus district, said that even when children were not physically in classrooms, her team “worked diligently with parents, teachers and related service providers in order to think outside of the box and provide our students with what they needed.”

“All districts are different with different needs,” she said in a statement, “particularly with regards to special education.”

The leeway districts were afforded in the year since New Jersey became an early epicenter of the pandemic has led to uneven reopening strategies that can differ significantly from one town to the next, confounding some parents.

“He just gave too much flexibility,” Bill Miller, a Secaucus resident with children in first and fourth grade, said about the governor. “Not every school district can handle that.”

New York City, which operates the country’s largest school district, has been open for elementary school students for much of the school year and invited middle and high school students back to class over the last two months.

New Jersey’s two largest city districts, Newark and Elizabeth, only began to partially reopen classrooms to elementary students in the middle of April.

Jersey City officials announced last week that schools would not reopen until September, only to reverse course days later after parents lashed out and the mayor and governor criticized the delay. The youngest students are now expected to return to school on Thursday.

“I was beyond livid,” said Jenn Sforza, a mother of three from Jersey City, whose 10-year-old son has a learning disability and attends a school that has been closed for more than a year.