Jack Ciattarelli, a businessman and former lawmaker, beat back challenges from candidates loyal to former President Donald J. Trump to win Tuesday’s Republican primary in New Jersey, setting the stage for one of only two governor’s races in the nation in November.

Mr. Ciattarelli, a moderate former assemblyman making his second bid for governor, will now face Gov. Philip D. Murphy, who ran unopposed for the Democratic nomination and is hoping to ride high approval ratings for his handling of the pandemic to a second term.

Democrats control all branches of government in New Jersey and outnumber Republicans by nearly 1.1 million voters.

Still, Mr. Murphy’s run is dogged by nearly a half-century of history: The last Democrat to be re-elected governor in New Jersey was Brendan T. Byrne, in 1977.

Mr. Murphy’s favorable ratings have slipped by about seven percentage points since the start of the second wave of the pandemic in October 2020, according to a new Rutgers-Eagleton Poll, but are still at a robust 47 percent.

“He’s in a solid position that any politician would envy,” said Ashley Koning, director of the Eagleton Center for Public Interest Polling.

Mr. Murphy’s handling of the pandemic earned high marks from 31 percent of residents, according to the poll. But only 7 percent said he deserved an “A” grade on tax policies, a perennial, bread-and-butter voter issue in New Jersey, where residents pay some of the highest taxes in the country.

Mr. Ciattarelli’s showing among his Republican base is considered likely to dictate the tenor and policy focus of the campaign. The election will come nearly a year into the first term of President Biden, a Democrat, making it an early bellwether of the electorate’s mood as the midterm congressional elections approach. Virginia is the only other state with a race for governor.

“What happens really influences the direction of the Republican Party going forward,” Dr. Koning said, adding that the election will indicate whether, in New Jersey, Republicans will “continue to follow the moderation that the party has been known for” or “become more nationalized toward Trumpism.”

Less than two hours after polls closed, with 65 percent of votes tallied, Mr. Ciattarelli was declared the winner by The Associated Press after capturing about 49 percent of the vote in the four-man race for the Republican nomination. His win comes four years after a second-place primary finish behind Kim Guadagno, the then-lieutenant governor.

The Republican primary was seen as a test of the potency of Mr. Trump’s combative brand of politics among New Jersey’s party faithful, and the public discourse often touched on themes from the former president’s divisive term: the politics of mask wearing and the legitimacy of Mr. Biden’s win.

“We all know Trump won,” Hirsh Singh, an aerospace engineer and self-described Trump Republican who was running his fourth recent campaign for office, said as he faced off against Mr. Ciattarelli in the only public debate of the primary. Only Mr. Singh and Mr. Ciattarelli qualified for public financing, making them eligible for the debate.

But it was Philip Rizzo, a pastor and real estate developer who also aligned himself with Mr. Trump, who was most closely trailing Mr. Ciattarelli late Tuesday.

Political analysts said the results could pressure Mr. Ciattarelli to strike national themes popular with Trump supporters instead of the good government and fiscal responsibility motifs that are more likely to resonate with mainstream Republicans and the state’s 2.4 million independent voters.

Mr. Ciattarelli in 2015 called Mr. Trump a “charlatan.” In last month’s debate, when asked if he supported the former president, he said, “I supported Donald Trump’s policies.”

“If he’s got to look over his shoulder every time something happens to make sure the Trump wing of the party is still with him, that’s going to be a serious constraint for him,” said Micah Rasmussen, director of the Rebovich Institute for New Jersey Politics at Rider University.

But Benjamin Dworkin, director of the Rowan Institute for Public Policy and Citizenship at Rowan University, said Republicans were likely to quickly coalesce around their candidate.

“There’ll be some day-after stories about whether he received a high enough percentage of the vote,” Dr. Dworkin said. “But that’s not going to matter by Day 3.” 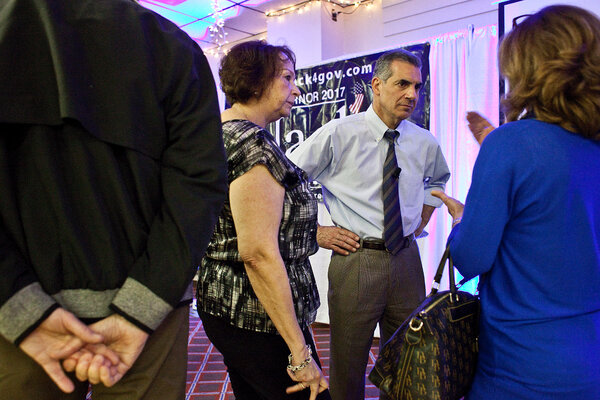 All 120 legislative seats were also on Tuesday’s ballot.

One of the most fiercely contested Democratic primaries was in Bergen County, for a seat held by Senator Loretta Weinberg, a liberal icon who announced in January that she was retiring. Her exit set up a match between two former allies in the Assembly, Valerie Vainieri Huttle and Gordon Johnson.

Without a primary opponent, Mr. Murphy has had a healthy head start in the campaign.

By last week, he had spent $7.25 million, outpacing spending by all the Republican candidates combined, according to New Jersey’s Election Law Enforcement Commission.

He has used the advantage to promote a range of first-term policy wins, including equal pay for women, a $15 minimum hourly wage, a new tax on income over $1 million and legalized marijuana.

“The choice in November is clear,” Mr. Murphy said in a statement soon after the polls closed Tuesday. “It’s a choice between standing for higher wages or going back to an economy that only worked for the wealthy and well connected.”

In November, the state borrowed $3.67 billion to plug an expected gap in revenue, enabling Mr. Murphy to propose an election-year budget that calls for no new taxes and few cuts, and sets aside extra funds for the state’s strapped pension program.

But the governor, a wealthy former Goldman Sachs investment banker, also pushed through a $14 billion package of corporate tax breaks in less than a week, a move that irked his progressive base.

“Everybody recognized they’re on the same ballot this year,” Dr. Dworkin said. “There’s a détente for now.”

Mr. Murphy may yet find himself haunted by another voting quirk in New Jersey: It has been more than three decades since voters elected a governor who hailed from the same party that won the White House in the year after a presidential contest.

But the Democrats’ enrollment edge in New Jersey has expanded rapidly, and many voters not affiliated with either of the two dominant parties are considered social moderates.