Sitting in an office in Coast Guard headquarters, where the mission is to ensure the safety of the nation, Lt. Christopher P. Hasson took illicit opiates and plotted terror attacks that he hoped would spark a race war, according to the authorities.

To outward appearances, the 49-year-old lieutenant was a suburban father with a desk job supplying Coast Guard ships, who was glimpsed by neighbors coming and going in uniform or walking his dogs with his wife.

But in court filings, prosecutors said he was also a “domestic terrorist” and self-described white nationalist who studied the methods of the Unabomber, the Virginia Tech gunman and other extremist killers; stockpiled guns and drugs; drew up a target list of prominent cable news journalists and Democratic politicians to be killed; and wrote, prosecutors said, of wanting “to murder innocent civilians on a scale rarely seen in this country.”

Lieutenant Hasson, who was arrested last week, appeared in federal court in Greenbelt, Md., on Thursday wearing crimson jail clothes, his hair closely cropped. He showed little emotion and declined to speak as prosecutors and his lawyer argued the question of whether he should be released from custody until his trial.

Magistrate Judge Charles B. Day said no, at least for the next 14 days, while prosecutors consider further charges beyond the relatively minor gun and drug possession counts he now faces. Prosecutors indicated that they would probably file terrorism-related charges before the 14-day period is up.

“The sheer number and force of the weapons that were recovered from Mr. Hasson’s residence in this case, coupled with the disturbing nature of his writings, appear to reflect a very significant threat to the safety of our community, particularly given the position of trust that Mr. Hasson held with the United States government,” Robert K. Hur, the United States attorney for the District of Maryland, said in the hearing.

In Lieutenant Hasson’s defense, his lawyer, Julie Stelzig, depicted him as a loving husband and father with no criminal record and 28 years of military service. She called the cache of weapons that federal agents found in his basement apartment — including high-powered rifles, assault rifles, shotguns and pistols — “modest at best,” and said that in a country with an estimated 363 million guns, it was unremarkable for a Marine Corps veteran like him to own 15. 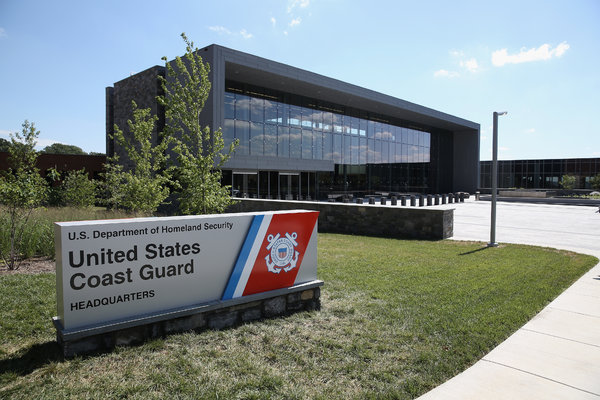 She called the prosecutors’ filing a “histrionic characterization” that relied mainly on circumstantial evidence and speculation about what he might be planning to do.

“We are not yet a country that detains people for their internet searches or deleted documents,” Ms. Stelzig said.

Prosecutors say that for at least two years, Lieutenant Hasson visited white supremacist and neo-Nazi websites, and studied the 1,500-page manifesto written by Anders Behring Breivik, a far-right Norwegian extremist who killed 77 people in 2011. They said that he also took the synthetic opioid Tramadol while at work and that he had obtained the drug illegally.

The Coast Guard declined to comment on the case on Thursday, citing the continuing investigation.

In writings discovered on his computer, prosecutors said, Lieutenant Hasson said he was a longtime neo-Nazi, but one who preferred “focused violence” to marches and rallies. A letter he drafted to friends in 2017, prosecutors said, contained musings about how to cause the maximum disruption to society.

But in public, Lieutenant Hasson gave little indication of his troubled thoughts.

Records indicate that he graduated from Greenway High School in Glendale, Ariz., in 1987 and served in the Marines from 1988 until 1994 as a mechanic servicing F-18 jets. In 1993, he married Shannon Coleman in Hampton, Va.

After the Marines, he served in the Army National Guard for two years, according to court filings, and at some point after that joined the Coast Guard, and became an officer even though he did not attend college. With 28 years of military service, he would be nearing the Coast Guard’s mandatory retirement limit of 30 years.

Like many military families, the Hassons moved frequently, living in Arizona, Nevada, California, Virginia, North Carolina and New Jersey, according to property records. Along the way, he apparently had children — his lawyer referred to him in court as a father — but neither they nor his wife was present at the hearing on Thursday.

Most recently, Lieutenant Hasson and his wife have been living in Silver Spring, Md., renting what the authorities called a “cramped basement” in a pleasant Cape Cod-style house with trimmed hedges.

Neighbors said he generally kept to himself and was not notably friendly.

Wilfredo Benavides, who lives a few houses up the street, said that when the Hassons walked their dogs, “they don’t talk to anybody, only pass. Never said good morning, never said good evening. That’s it.”

Lieutenant Hasson owns a house in Currituck County, N.C., that he rents out. The current tenant, Bob Davis, told The Associated Press he was “absolutely shocked” by the allegations against his landlord, whom he had met several times.

“He was a very stern military guy,” Mr. Davis told The A.P. “He portrayed in a very professional manner. He was honorable.” Mr. Davis called the lieutenant “a good man.”

The writings that prosecutors quoted in court filings painted a far different picture. They cited letters in which Lieutenant Hasson contemplated creating chaos with a chemical or biological attack. “I think a plague would be most successful but how do I acquire the needed/ Spanish flu, botulism, anthrax not sure yet but will find something,” the authorities said he wrote.

Daniel Koehler, the director of the German Institute in Radicalization and De-Radicalization Studies in Berlin, said in a telephone interview that Lieutenant Hasson “more or less fits perfectly in what we would expect” about someone who would plot such an attack.

In a study of recent terror plots that Mr. Koehler published in 2018, he found that plotters who sought to use poisonous gas, infectious diseases or radioactive material were generally middle-aged, middle-class and fairly well educated, and espoused far-right views that were not religious.

“They have good jobs and standing in society; they are not the typical marginalized people you find radicalized,” he said. “They think their community, whether it is the white race or something else, is under threat, and they have to fight back to destroy the enemy that is destroying their culture.”

“It almost seems like they see shootings as below them,” he added “They want to do something bigger.”

Lieutenant Hasson had researched biological weapons and improvised explosives, the authorities said, but he also had $13,000 worth of guns, ammunition, ballistic vests and other gear in his apartment, suggesting that he had both modes of violence in mind.

The Hasson case is the second in recent months involving the Coast Guard. In January, the service issued an administrative letter of censure to an officer who was caught surreptitiously flashing what appeared to be a white power hand gesture in the background of a televised interview during Hurricane Florence.

Kathleen Belew, a professor of history at the University of Chicago who has studied the white power movement, said certain phrases in Lieutenant Hasson’s writings cited in court filings showed he was deeply familiar with white supremacist thought.

She said he had clearly been influenced by white power literature like “The Turner Diaries,” a 1978 novel about a race war in America brought about by acts of terror, ultimately leading to the global extermination of all nonwhite people.

Lieutenant Hasson’s calls for “focused violence,” she said, echoed a strategy called leaderless resistance that white supremacists began following in the early 1980s to stymie prosecution and hide the extent of their movement.

“When this movement is presented as the work of one person, or a cell of people, we lose this context, which is first of all exactly what this movement would like us to do,” Ms. Belew said.

She added, “I think the history would indicate the Pentagon has a difficult job” in rooting out white supremacists, because it must respect freedoms of speech, association and religion while confronting “the very real revolutionary threat this movement represents.”