It was a force built for war, and now it has found a new one — on the streets of Colombia’s cities, where the police stand accused of treating civilian protesters as battlefield enemies.

Demonstrations that began two weeks ago as anger over pandemic-related tax reforms have intensified and spread, turning into a collective howl of outrage over abuses by the national police force. Officers have beaten, detained and killed protesters in recent days, sometimes opening fire on peaceful demonstrations and shooting tear gas canisters from armored vehicles, according to more than a dozen interviews by The New York Times with witnesses and family members of the dead and injured.

Critics say the violence and mounting death toll indicate an urgent need for police reform. And the call to bring the police into line has struck a resounding chord in a country weary of war and atrocity at the hands of a host of paramilitaries, guerrilla fighters and security forces.

“They see us as the enemy, knowing that we are citizens,” said Alexis Medina, 29, a protester who said he was detained and beaten by police officers who forced him to drink their urine.

“Drink it or I’ll knock out your teeth,” he said he was told.

At least 42 people have died, including one police officer, the government said Tuesday. Human Rights Watch and other organizations say the total is likely higher. 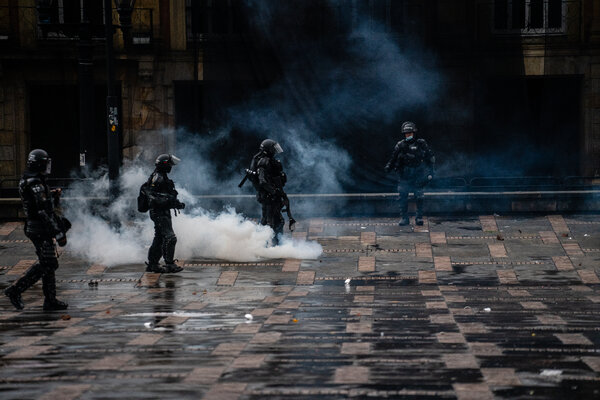 “It’s a very good police force for war,” said Óscar Naranjo, a former police chief who has pushed for change within the department. But after Colombia struck a peace deal with its largest guerrilla group — the FARC, or Revolutionary Armed Forces of Colombia — society changed, he said.

Before the accord, protest was often stigmatized, associated with guerrilla movements, he added. The agreement, signed in 2016, opened new space for political dialogue, while also creating a new generation that believed it would be the first in decades to live in peace. But the police, Mr. Naranjo said, have not yet adjusted to that framework.

“It needs to accelerate the process of adapting to this new post-conflict situation,” he said.

Amid the unrest, President Iván Duque initiated a formal dialogue with civil society leaders, noted his “respect for peaceful protest” and said that all violence against civilians and public servants should be “investigated and punished.” The police have opened 66 investigations into alleged misconduct and suspended five individuals, officials say.

But Mr. Duque and his government appear to be resisting calls for change in the department.

His defense minister, Diego Molano, who oversees the national police force, said people have shot at officers, who have been hurt in the hundreds. And he blamed the unrest on the country’s diminished but remaining armed groups, whom the government identifies as terrorists.

“Criminal organizations are behind the violent acts that tarnish peaceful protest,” he said.

The images of police abuse of the past few days have prompted concern from the United Nations High Commissioner for Human Rights, the Organization of American States, the European Union and officials in the United States, which has bankrolled Colombian security forces for years, and is in the midst of its own reckoning over police conduct.

Colombia’s police force is one of few — if not the only — in the Americas that sits under the Ministry of Defense, alongside the military. That shift happened in the 1950s, following a bloody civil conflict in which warring political parties used the police against each other.

At the time, the government hoped to professionalize and depoliticize the job by consolidating a fragmented system into a national force, said Juan Carlos Ruíz, a professor and security expert at Colombia’s Universidad del Rosario.

By the 2000s, the police had become a critical player in a counterinsurgency strategy aimed at rooting out the FARC, in which the military cleared rebels from territory and the police held that ground. The strategy worked, forcing the rebels to negotiate. And it earned the police “very high levels of citizen trust,” said Paul Angelo, a fellow at the Council on Foreign Relations.

But since the peace deal, little has changed within the police department.

Juan Manuel Santos, who was president when the deal was signed, had long supported moving the police out of the defense ministry. But the idea had been unpopular with the armed forces, in part because the police bring money and manpower into the ministry, Mr. Angelo said. By the time Mr. Santos had signed the peace deal, he had little time left in office, and even less political capital. The change was never made.

Now, police reform advocates are again pushing to move the 140,000-officer force from the defense department into the interior ministry — and to prioritize human rights training, limit weaponry, and try officers who commit crimes in ordinary courts instead of military ones.

In an interview, the head of the national police, Gen. Jorge Luis Vargas, said he had presented a reform plan to the country earlier this year. But the police should not be moved out of the defense ministry, he said.

“The situation of drug trafficking and illegal groups at this time does not allow it,” he said, calling these issues “the main problem in Colombia.”

The protests began in late April, when Mr. Duque proposed a tax overhaul meant to help close a fiscal hole exacerbated by the pandemic. Already, the country was on edge: After a year of Covid-related restrictions, the outbreak was only getting worse, along with poverty, inequality and joblessness.

Mr. Duque pulled the tax proposal soon after demonstrations began. But after the police responded with heavy force, the protests have only accelerated. In some places, protesters have blocked major roads, preventing food and other goods from getting through.

Cali, Colombia’s third-largest city, has been the scene of some of the worst violence.

On May 3, police opened fire on peaceful protesters who had come out for a vigil to memorialize others killed in the demonstrations, according to three witnesses interviewed by The Times.

Claudia Vásquez, 48, described how the night began with candles and prayer, until helicopters began to roar overhead, shining a giant spotlight on mourners, many of them children and older people. Then tear gas rained down.

Police arrived on motorbikes, she said, and began to shoot.

Among the dead was Kevin Agudelo, 22, who wanted to protest social inequality and a lack of opportunity, said his childhood friend, Jesús Giraldo, also 22.

Mr. Agudelo had grown up in a poor neighborhood, gone to public school, and aspired to study at a local university, but didn’t have the means, Mr. Giraldo said. He had been working at a home goods store and trying to save.

“He is so young,” Mr. Giraldo said. To have “all those dreams, for them to be cut off at this age, so abruptly, seems too unjust to me.”

Part of the challenge for police has been the size of the protests, which have sent thousands into the streets every day over the last two weeks.

The country has a riot police force, known as the Esmad, or Mobile Anti-Disturbance Squadron, whose officers are trained to deal with large crowds. They wear heavy body armor, and are not allowed to carry lethal weapons, Mr. Ruíz said.

But the demonstrations were so big that the national police stepped in as reinforcement. Its officers wear very little protection — and carry pistols with live ammunition.

Hundreds of people have been injured by officers, according to Temblores and Indepaz, human rights organizations in Colombia.

Among them is Juan Pablo Fonseca, 25, a chef in training who went out to protest in Bogotá, the capital, on May 1. When the police began to set off tear gas, he tried to escape, he said. Then he turned, and came face to face with one of the Esmad officers in body armor.

“He pointed at me and shot,” said Mr. Fonseca, who lost his eye to a tear-gas canister.

Temblores and Indepaz, have received more than a thousand reports of arbitrary detentions during the protests. Human Rights Watch said several people have been beaten in custody.

“I have never seen the police engage in this level of sustained brutality across Colombia,” said José Miguel Vivanco, director of the organization’s Americas division. “Unless President Duque changes course, these recent developments will further damage Colombia’s standing in Washington and Europe.”

Among the injured is Johan Moreno, 27, a lawyer in the department of Santander, near the country’s northeastern border.

On May 4, Mr. Moreno put on a gray vest that read “legal team” in orange letters on his pocket and went out to document the violence in the streets.

When several officers surrounded him, he put his hands up and told them that he was a “human rights defender.”

That was no protection. The police officers threw him to the ground, kicked him, grabbed him by the neck and bludgeoned him in the head, he said.

What he remembers most, he said, are the captain’s words, as he passed in and out of consciousness.

“You’re not a human rights defender,” he said, according to Mr. Moreno. “You’re a [expletive] guerrilla fighter, and I’m going to show you how to faint for real.”