COLUMBUS, Ohio — In the moment before Casey Goodson Jr. was shot dead by a sheriff’s deputy at the entrance of his home, his lifelong neighbor heard a man shouting, as if he were arguing, and then a burst of gunfire.

The neighbor, Andrew Weeks, rushed to a window and saw three men outside, at least one holding a rifle. He called the police, unaware that the three men — all in plain clothes — were law enforcement officers.

Before long, the block was lined with emergency vehicles, and Mr. Goodson was carried out on a stretcher, fatally wounded from several gunshot wounds.

Mr. Goodson, 23, was killed by a local sheriff’s deputy, Jason Meade, who was assigned to a fugitive task force organized by the U.S. Marshals. Members of the task force had been in the area looking for someone in an operation that had nothing to do with Mr. Goodson.

While those details aren’t in question, almost everything else about the Dec. 4 shooting — the events that preceded it, why it happened, where exactly on his body Mr. Goodson was shot — has been disputed. And the case, the latest in a series of police killings of Black men this year, has roiled Columbus, prompted hundreds to demonstrate in the city’s streets and underscored tensions between the city’s Black community and the authorities.

“The whole situation is just completely out of control,” said Brenda Davis, who has lived across from Mr. Goodson’s home in Northeast Columbus for more than 20 years and also serves as the secretary of the local chapter of the N.A.A.C.P. “We are hearing so many conflicting reports.”

According to the U.S. Marshal for the Southern District of Ohio, Peter Tobin, members of the fugitive task force saw Mr. Goodson waving a gun while he was driving his car. Deputy Meade, a 17-year veteran of the Franklin County Sheriff’s Office, gave chase.

“That’s when the deputy, at some point after that, he confronted him,” Mr. Tobin said, “and it went badly.”

Deputy Meade’s lawyer, Mark Collins, said that Mr. Goodson pointed a gun at the deputy. But Mr. Goodson’s family members, who were inside the house and heard the gunfire, said they did not see a gun near him after he was shot.

The Columbus police, who are investigating the case, said there were “reports of a verbal exchange” before the shooting, and that a gun was “recovered from Mr. Goodson.” But they have not said where the gun was found, whether in Mr. Goodson’s hands, elsewhere on his body, or in his car.

There is no video footage of the confrontation that led to Mr. Goodson’s death, unlike other high-profile shooting deaths of Black men, like Ahmaud Arbery in Brunswick, Ga., Walter Scott in North Charleston, S.C., and Tamir Rice in Cleveland. And unlike officers with the Columbus Police Department, Franklin County sheriff’s deputies do not wear body cameras, though approval to purchase cameras has been discussed for months. 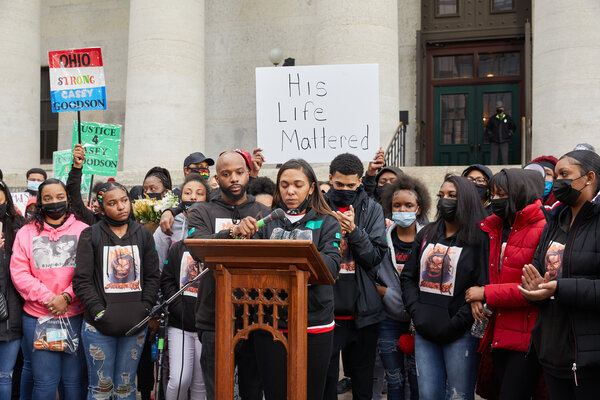 Mr. Goodson’s family said he had ambitions to own commercial trucks, had taken classes to earn a commercial driver’s license and had also talked about becoming a firearms instructor. They said he emphasized to other family members the importance of proper firearms handling.

His relatives described him as a gentle soul who was never in trouble with the law, and they said he saw himself as his family’s protector after his grandfather’s death.

“He was just a Black man coming home from a dentist’s appointment. He didn’t do anything,” his mother, Tamala Payne, said of the Dec. 4 encounter.

Ms. Payne, who spoke to reporters during an online news conference last week, called for protests in her son’s name to be nonviolent. “My son was a peaceful man, and I want his legacy to continue in peace,” she said.

She also urged the authorities to charge Deputy Meade.

Deputy Meade, who was placed on administrative leave after the shooting, was one of seven deputies who fired weapons during a deadly 2018 standoff. None of the deputies was found at fault. He was also orally reprimanded last year for violating the sheriff’s office’s rules on reporting Taser use.

Mr. Goodson’s death has capped a year that has seen tensions rise between the police in Columbus and Black residents, who account for slightly less than a third of the city’s population of 900,000 but are pulled over at alarmingly higher rates than white residents.

Activists have criticized the Police Department’s record of stopping Black motorists. Between 2012 and 2016, Columbus police officers made 84 percent more stops per resident in neighborhoods that were at least three-quarters Black.

During weeks of protests in Columbus this summer after the killing of George Floyd, who died after being pinned beneath the knee of a white police officer in Minneapolis, there were many complaints that Columbus officers used excessive force against demonstrators. The Columbus City Council allocated funds for an investigation into those claims, and 19 accusations of misconduct remain under review.

On Friday, the Columbus police chief, Tom Quinlan, vowed that protesters demanding justice for Mr. Goodson would be allowed to exercise their First Amendment rights, and that all officers would be wearing body cameras and have badge numbers visible.

“I hear the cries of this community,” Chief Quinlan said. “I hear your demands for answers, for accountability, and for justice.”

The Ohio attorney general’s office, whose Bureau of Criminal Investigation often investigates shootings involving police officers, said it declined to do so in this case because the request was not made until three days later, after witnesses had been interviewed and the scene cleared.

“We do these tough investigations all the time — but from the beginning,” the attorney general, Dave Yost, tweeted last week. “This one belongs to CPD.”

At a rally at Columbus’ Statehouse on Saturday, people who knew Mr. Goodson described him as empathetic. Malissa Thomas-St. Clair, his sixth-grade teacher, said he was a model student who reached out to her by text message when her own son was killed in 2013.

“I remember you as a strong woman, but if you ever need an ear to talk to, I’ll be here for your support,” she said he wrote.

She said she last saw him alive not too long before his death, at a store where he was shopping for his dog.

“Listen to me clearly, young people,” she said at the rally. “Casey Goodson was a good man. He couldn’t hurt nobody. When it registered who they were talking about, I knew instantly in my soul, they got this one wrong.”

After the shooting, Mr. Tobin, the U.S. Marshal, said that it had been justified. But after the city’s mayor, Andrew Ginther, sharply criticized him for “uninformed” statements that had damaged the public’s perception of the investigation, Mr. Tobin reversed course on Friday, saying his comments were “premature.”

Mr. Tobin also sought to put some distance between his task force and Deputy Meade’s actions, saying the deputy was acting on his own, independent authority during his pursuit and shooting of Mr. Goodson.

The police have said that no one witnessed the shooting, and they have not said where on his torso — his front, back or side — Mr. Goodson was shot.

But Mr. Goodson’s family and their lawyer, Sean Walton, said that Mr. Goodson was shot three times in the back. They also said that the only things he had in his hands were a face mask to protect him from the coronavirus and Subway sandwiches he had brought home for himself and his family. He had just inserted his house keys into a lock on a side door when he was shot, a woman who identified herself as his sister, Kaylee Harper, said in an emotional Facebook post.

Mr. Weeks, Mr. Goodson’s neighbor across the street, said that little about the shooting added up. The officers he saw were not in uniform, so how could Mr. Goodson have known they were law enforcement — either when he drove past them, or when one pursued him, Mr. Weeks asked.

“What if he sees the cop, and he has no clue it’s a cop?” Mr. Weeks said. “The stories are just so different.”