As New York edges closer to adopting congestion pricing, a major obstacle could stand in the way: the suburbs, where many lawmakers and commuters see the plan as benefiting the city at their expense.

Leaders in Albany announced this week that they had reached a consensus that a congestion pricing plan to charge drivers to enter Manhattan’s busiest neighborhoods was needed to raise billions of dollars for the failing subway.

But the details have yet to be worked out, and Long Island lawmakers want revenue from congestion pricing to flow to the commuter trains their constituents ride.

[Driving into Manhattan may soon cost well more than $10. Here’s more on how congestion pricing would work.]

“At the end of the day, congestion pricing for Long Islanders should mean a better Long Island Rail Road,” said Senator Todd Kaminsky, who leads an influential six-member Long Island delegation that is part of the Senate’s Democratic majority.

But suburban demands for a piece of the congestion-pricing pie gloss over a stark financial reality: Long Island already benefits from larger per-ride transit subsidies than New York City, and its commuters who drive tend to be wealthier than most city subway riders.

The Long Island Rail Road accounts for just 3.5 percent of all transit rides provided by the Metropolitan Transportation Authority, which oversees the railroad and the city’s public transit.

Yet the M.T.A. subsidizes each ride on the Long Island Rail Road by $7.68, compared with $1.58 for each ride on New York’s subway trains and buses.

Even the Metro-North Railroad that serves suburbs north of the city, which the authority also manages, gets less than the L.I.R.R. — $6.54 per ride.

The Long Island commuter railroad has also received nearly $3 billion for repairs and improvements since 2015, accounting for 9 percent of the M.T.A.’s five-year capital spending plan. 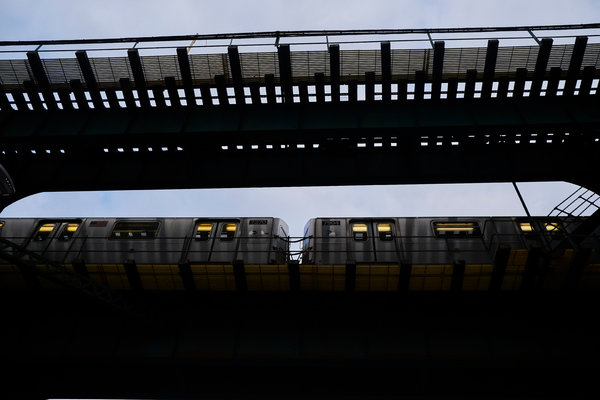 Still, many Long Island residents and officials say their trains have grown crowded and service has deteriorated with constant delays and cancellations. “Whatever is happening, it isn’t working,” Mr. Kaminsky said. “To ask them not to drive when mass transit may not be up to the task, I think, would be seen as unfair.”

Legislators from the Hudson Valley have also called for congestion pricing revenues to be directed to the Metro-North Railroad.

“We’ve just felt neglected and forgotten about by the M.T.A. for years,” said Senator David Carlucci, who represents parts of Westchester and Rockland counties, adding that he could not support any congestion pricing plan without dedicated money for Metro-North.

A congestion plan backed by Gov. Andrew M. Cuomo and Mayor Bill de Blasio could raise about $1 billion annually in fees for driving into Manhattan from 60th Street south to the Battery. That money would be used to secure bonds totaling $15 billion for the transportation authority, which could also benefit suburban commuters.

But transit officials say at least $40 billion is needed to turn the creaky subway, which carries an average 5.6 million riders every weekday, into a modern 21st century system.

Drivers entering the congestion zone through tolled tunnels or the Henry Hudson Bridge from the Bronx to Manhattan would receive a credit, while those taking the Brooklyn Bridge directly to the Franklin D. Roosevelt Drive north past 60th Street would not have to pay.

Suburban senators have called for exemptions or toll credits for crossings heavily used by commuters — the Robert F. Kennedy, the George Washington and the Governor Mario M. Cuomo bridges. They also want improvements in bus service in transit deserts, and for suburban commuters to be represented on a proposed committee to review M.T.A. capital projects.

Senator Andrea Stewart-Cousins, a Democrat from Yonkers and the majority leader, has said “there is a need for a dedicated stream of revenue to fix the crumbling M.T.A. but any fix must benefit all parts of the M.T.A.”

Providing too many exemptions or toll credits would undermine the goal of reducing traffic and could result in higher fees for others to ensure enough revenue is collected, state officials said.

Kate Slevin, a senior vice president for the Regional Plan Association, a research and advocacy group that supports congestion pricing, said he believed lawmakers were engaging in typical Albany negotiations since congestion pricing is part of the next state budget, which is due April 1.

“They’re laying out their interests,” she said. “That’s very standard for this time of year.”

About 36,000 Long Island residents drive to work in Manhattan, including about 5,000 who participate in car pools, according to an analysis of census data by Social Explorer, a research company. Three times as many, or 108,000 commuters, take the train to work anywhere in New York City.

Steve Levy, the executive director of the Center for Cost Effective Government, a conservative fiscal policy group on Long Island, said congestion pricing was simply another way to squeeze more money out of commuters and taxpayers and fails to address the M.T.A.’s “out-of-control spending.”

“Enough is enough,” he added.

Even Long Island residents who support the idea of congestion pricing say it could create more problems. “In practice, there’s no way to make it work because the Long Island Rail Road is so broken,” said Jen Hosford, 45, a risk manager whose commute by train to Manhattan has never been worse. “If you’re going to add that many people, where are they going to go?”