Weather: Early fog and scattered showers, but there might be a little sun later in the day. High in the upper 70s. 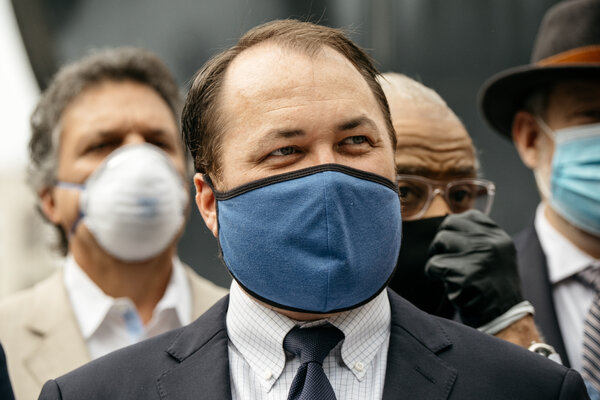 The presidential election may be consuming the public’s attention, but there was a major shake-up last week in another race that is vitally important to New Yorkers: the bid to be New York City’s next mayor.

Corey Johnson, the City Council speaker who was seen as a front-runner, announced that he would drop out, saying he could no longer run a campaign and be an effective speaker while monitoring his mental well-being. (Mr. Johnson said he had been suffering from depression since May.)

[Mr. Johnson had been wrestling for weeks about whether to continue his candidacy.]

I asked my colleague Jeff Mays, who covers City Hall, about the significance of Mr. Johnson’s withdrawal and what it might mean for the mayor’s race.

Who are the leading candidates now? And what does Mr. Johnson’s withdrawal say about the race?

Corey Johnson was definitely considered a front-runner just a few months ago, before the Covid crisis. Along with Mr. Johnson you had the comptroller, Scott Stringer, who recently officially announced his candidacy, and Eric Adams, who is the Brooklyn borough president. It was largely expected that those three would be the major choices.

I think what happened is you had the pandemic, and then that was followed by protests after George Floyd’s death, and you still have developing New York City’s fiscal crisis, with at least $9 billion in tax revenue shortfalls, on top of an increase in shootings and homicides — I think you have all of those factors affecting the race, and who might be considered a front-runner.

Corey Johnson had to deal with the police issue. He pledged to cut $1 billion from the N.Y.P.D. The City Council didn’t quite reach $1 million, and he received a lot of criticism.