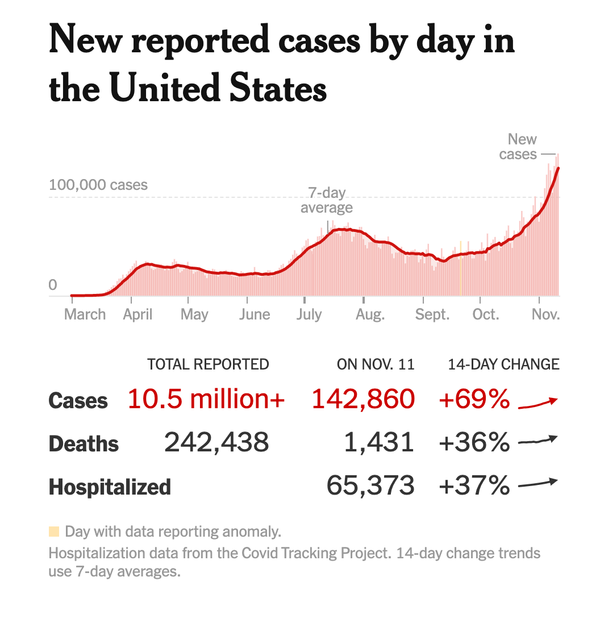 Britain became the first European country to surpass 50,000 deaths from the coronavirus.

California became the second state to record one million coronavirus cases, after Texas.

More prominent Republicans have tested positive, including the Trump campaign adviser Corey Lewandowski; Richard Walters, the R.N.C. chief of staff; and Don Young of Alaska, the oldest member of the House.

Here’s where the virus has hit hardest

The United States is reeling as infections and hospitalizations soar to all-time highs. Outbreaks are emerging from coast to coast.

Which place is the worst off?

Our reporters Mitch Smith and Amy Harmon dug into the data and found lots of places that would qualify — depending on the metrics.

The metro area with the most recent cases per capita: Minot, N.D.

The county with the most known cases: Los Angeles County, Calif.

More than 325,000 cases have been identified in Los Angeles County over the course of the pandemic, more than in 44 states — but this figure can be a bit misleading. On a per-capita basis, Los Angeles County has far fewer cases than many other counties in California and elsewhere.

The state with the highest hospitalization rate: South Dakota.

About 54 of every 100,000 South Dakotans are hospitalized with Covid-19. The testing positivity rate remains sky-high, and there are few signs of progress. On Tuesday, Mayor Paul TenHaken of Sioux Falls cast the tiebreaking vote to strike down a citywide mask mandate, which he has called “simply unenforceable.”

The state that has unraveled the fastest: Wisconsin.

At the beginning of September, Wisconsin averaged about 700 cases a day. This week, it’s averaging more than 6,000. Hospitals are packed, positivity rates remain high, and testing supplies are strained. More than 300 deaths were reported in the state over the past week, a record.

More than 24,000 New Yorkers, or one in every 351 city residents, have died from the virus. Still, some rural counties in other parts of the country may have higher death rates.

Schools in N.Y.C. may close

The nation’s largest school system is on the precipice of closing thousands of schools.

New York City, once the global epicenter of the pandemic, now has far lower rates of community infection than most of the country, but the numbers are quickly climbing. On Thursday, the seven-day test positivity rate rose to 2.6 percent. If that number hits 3 percent, schools are supposed to close.

For many of the approximately 300,000 families who have cobbled together ways to send their kids to classrooms for a few days a week in this fractured school year, the reversal is a gut punch.

Particularly maddening is that restaurants, bars and gyms — indoor spaces which have been shown to be primary vectors of coronavirus infection — remain open, albeit with some restrictions.

New York City’s schools have recorded a much smaller number of infections. A recent positive-test rate was just 0.17 percent, prompting one of the city’s top health officials to declare that public schools are among the safest public places around.

Many countries in Western Europe have chosen to keep classrooms open and to place restrictions on bars and restaurants instead, a contrast that has not gone without notice.

“That N.Y.C.’s public schools may have to shut down because the city and state felt they just had to let people dine indoors and work out at a gym says all we need to know about how much our society values public education, particularly when it comes to low-income Black & brown kids,” our colleague Nikole Hannah-Jones said on Twitter.

It’s been a tough year for parents. Schools have closed and reopened, only to close again. Parents have scrambled to find child care while struggling to do their jobs and navigate remote learning. But there have been joyous moments, too.

The Times spoke to mothers and fathers across the county about what parenting has been like in the pandemic. Here are a few of their stories.

New Zealand, which eliminated community spread of the virus, discovered a mysterious new case that officials think may have been transmitted within the country, Radio New Zealand reports.

In Italy, which is facing a surge in cases, a video of a man who died in the bathroom of an emergency room in Naples from what might have been Covid has sparked outrage across the country.

As cases continue to grow in most of Canada, the western province of Manitoba implemented sweeping restrictions that closed most stores other than grocers and pharmacies, along with sports fields and playgrounds, bars, movie houses and theaters.

Last month, the Institute for Health Metrics and Evaluation at the University of Washington predicted that by around Inauguration Day, deaths in the U.S. could reach 2,200 a day, and total 386,000. As infections accelerate, Foreign Policy reports that deaths may reach 2,500 a day, and 400,000 total, by around Christmas.

Dr. Michael Osterholm, a coronavirus adviser to President-elect Joe Biden, said that shutting down the economy and paying people for lost wages for four to six weeks would help get the virus under control and keep the economy afloat until a vaccine is available, CNBC reports.

The Centers for Disease Control and Prevention said that children’s visits to the emergency room for mental health issues have risen sharply.

Will Thanksgiving lead to a spike in cases? Time magazine found that Canada’s Thanksgiving, on Oct. 12, did.

A passenger tested positive on a “preliminary basis” on the first cruise ship to begin sailing again in the Caribbean, The Points Guy reports.

Dry air caused by cold winter temperatures and heaters can make it easier for viruses to spread, Wired reports. A humidifier this winter could help.

I have eight roommates in my house, off of Ohio State University’s campus. It has been very helpful to have a community while trying to social distance. People are shocked when I tell them I live with so many people, but I would never have it any other way. Some things we do to keep busy: shave our heads, become Ping-Pong masters, fix old go karts and race in empty parking lots, and work toward becoming master carpenters. This year has been a rough one, but having people to do it with made it extremely fun.