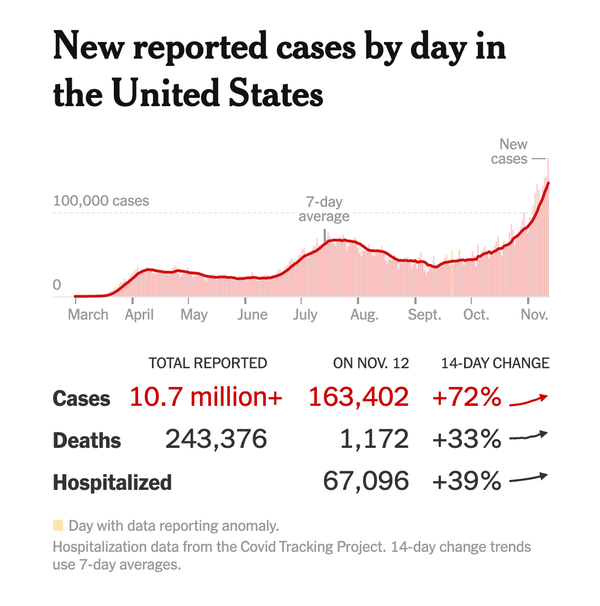 At least 30 Secret Service officers have tested positive for the virus, and about 60 are being asked to go into quarantine.

President Trump, in his first public address since losing his re-election bid, made no acknowledgment of the surge in coronavirus cases gripping the nation.

The fall coronavirus surge in the U.S. is at a dangerous inflection point, with cases spiking across a wide swath of the country.

“What separates this moment is both the breadth of the struggle right now around the country, as well as the suddenness with which case numbers are going up,” said our colleague Mitch Smith, who tracks the coronavirus for The Times.

Last Wednesday, the U.S. topped 100,000 daily cases for the first time. Eight days later, that number was up to more than 163,000. Thirty-seven states set weekly case records in the last few days, and 32 states — from Alaska to New Hampshire — hit that mark again yesterday.

“If you look at the bar charts of cases in different states, a lot of them right now look like straight upward lines,” Mitch said. “And we don’t know where that goes.”

Mitch told us he was most fearful for the Midwest, from Nebraska north to Canada and east to Chicago. The near future looks incredibly dark for cities like Chicago, Milwaukee, Omaha, Des Moines and Minneapolis, where hospital beds are filling up and cases continue to rise.

As far as bright spots, there really aren’t any, Mitch said. The only positive development, if you could call it that, is that populous states like Florida, California and New York are not deteriorating as rapidly as other places — although the situation in those states is also getting worse.

In his first public address since losing his re-election bid, President Trump made no acknowledgment of the incredible surge in coronavirus cases gripping the nation. Because of the vacuum of leadership at the federal level, local elected officials across the country are begging residents to change their behavior, instituting fresh restrictions and warning of more changes on the horizon.

The governors of California and Washington urged their residents today to avoid all nonessential interstate travel, while the mayor of New York City warned that public schools could close as early as Monday.

The health care system in particular — as Ed Wong of the Atlantic reported today — is under intense strain.

“The country, for many months, has seen consistent transmission, consistent infection, consistent suffering, and consistent death,” Mitch said. “But what we haven’t seen, in a widespread way, is not being able to fully help people. And given what we’re hearing from doctors and governors, I fear that’s where we could be heading.”

How rules are changing in your state

As cases have exploded in the U.S., governors have undertaken a flurry of actions to try to slow the spread of the virus. Just this week, Utah and Ohio, both states led by Republican governors, have mandated masks statewide. The governor of Iowa, Kim Reynolds, has long resisted a mask mandate, but this week she ordered that masks be worn at large gatherings.

The New York Times is tracking coronavirus restrictions on the state level, including which businesses are open or closed — and whether officials require masks or recommend or order staying at home. Here are the latest rule changes in your state.

Health officials are dreading Thanksgiving this year, as the surging virus threatens to become even worse because of interstate travel and large family gatherings.

The Times has assembled guidance on how to navigate this year’s holiday season if you plan to travel, from the types of coronavirus tests available for travelers to how to choose the safest seat on a plane. If you’re visiting relatives, you should expect to go into quarantine, with strict statewide requirements. (As a reminder, experts generally suggest two weeks for a safe quarantine. So for Thanksgiving, you should have started yesterday.)

For college students, who may not have the option to stay on campus, it’s crucial to isolate themselves even if they test negative for the virus before traveling. “Their arrival on Wednesday with plans to see grandma on Thursday could pose a huge risk,” David Rubin, a pediatrician and public health expert at the University of Pennsylvania, told our colleagues.

The actual Thanksgiving meal should look significantly different this year, experts advised, with lots of fresh air (through open windows or by hosting the meal outside), a small guest list and as short a celebration as possible. The Times’s Tara Parker-Pope writes that all guests should wear masks whenever they’re not eating and should all use separate utensils.

You might be weighing whether to skip the family gathering altogether, and how to break that news to a disappointed relative. That conversation should happen as soon as possible, experts told the Times’s Christina Caron. Dr. Anthony Fauci, the nation’s top infectious-disease expert, told Tara that his three adult daughters had decided to skip the holidays this year to avoid putting him and his wife at risk. “You don’t want to be the Grinch that stole Thanksgiving,” he said. “But this may not be the time to have a big family gathering.”

In Illinois, where more than 75,000 cases have emerged in the past week, Gov. J.B. Pritzker suggested that he could soon impose a stay-at-home order, and he scolded local officials for not enforcing mask rules and restrictions on businesses.

Puerto Rico will activate the National Guard to help enforce a curfew aimed at curbing the virus, The A.P. reports.

Mr. Trump has refused to concede the election and allow Mr. Biden’s team access to key health officials, which a top Biden adviser warned could make it harder for the federal government to distribute a vaccine once one is approved.

In a turnabout, the Centers for Disease Control and Prevention is hewing more closely to scientific evidence and issuing increasingly assertive advice, often contradicting the positions of the Trump administration.

Thousands of Philadelphia-area nurses plan to strike as their working conditions worsen.

An influential group of public health experts is recommending that many schools end in-person teaching and stay closed until after the holidays.

In unusually pointed remarks, Justice Samuel A. Alito Jr. of the Supreme Court told a conservative legal group that government responses to the coronavirus pandemic posed a grave threat to fundamental freedoms.

Dr. Fauci said that the mutation of the virus found in Danish mink farms does not appear to be a problem for the effectiveness of vaccines, CNBC reports.

More Americans are getting tested for coronavirus than ever before — and that could mean more surprise medical bills. Here’s how to avoid them.

Well, what a fabulous 14 days here in Melbourne! Zero new Covid-19 cases and zero deaths. We are all close to tears with joy. After a horrendous error with quarantine issues for residents returning from other countries infested with the virus a few months ago, which caused an enormous outbreak of Covid-19, we are now in a wonderful position. It took 115 days of lockdown, mandatory mask wearing (still imposed for the foreseeable future) and social distancing. The figurative steel band around Melbourne has now been lifted, and we can all dance in the sunshine around the state.