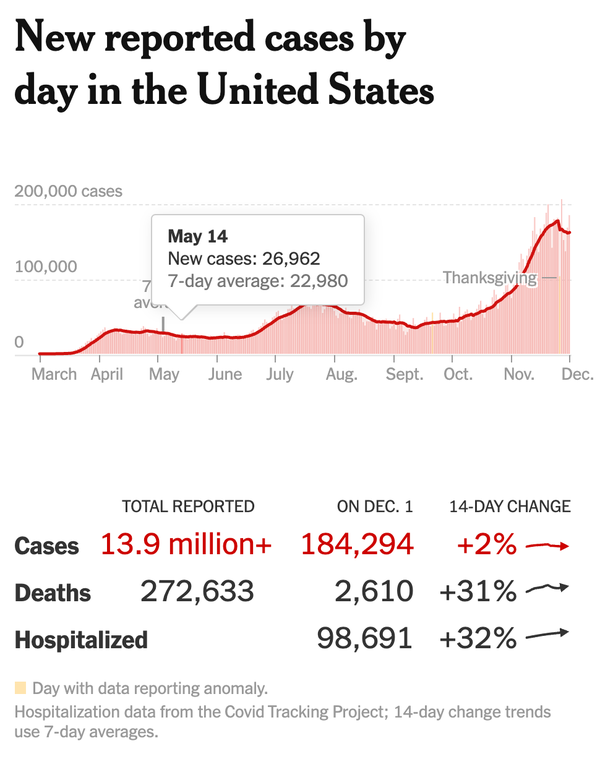 The C.D.C. director predicted that total deaths from Covid-19 in the U.S. could reach “close to 450,000” by February unless a large percentage of Americans follow precautions like wearing masks.

The C.D.C. warned Americans not to travel for the holidays and outlined ways to shorten quarantine times.

Gov. Andrew M. Cuomo said that, if authorized, the first batch of Pfizer’s Covid-19 vaccine was expected to arrive in New York on Dec. 15 and contain enough doses for 170,000 people.

Britain is set to start vaccinations

Leaping ahead of the U.S., Britain gave emergency authorization to Pfizer’s coronavirus vaccine today, and the country is set to begin the first inoculations against Covid-19 on Monday morning.

With the move, Britain became the first Western country to allow mass vaccinations against the virus and the first country to authorize the use of a fully tested vaccine. (Russia and China have approved vaccines, but without waiting for the results from large-scale trials.)

The early approval is a shot in the arm for a country that has struggled to get the virus under control and where more than 59,000 people have died from Covid-19, according to a New York Times database.

The first Britons on the list to receive a vaccine are nursing home residents and workers, followed by people older than 80 and health and social care workers. In practice, though, frontline hospital workers may be quicker to receive vaccines because of the difficulties of storing and moving the Pfizer vaccine to nursing homes and other sites.

Britain beat the United States to authorization — even though the vaccine was developed by an American pharmaceutical giant (and the small German company BioNTech) — by taking a different, and quicker, route.

While American regulators work line by line through the raw data from vaccine makers to check their trial results, their counterparts in Britain rely more heavily on the companies’ own analyses. Britain also relied on an old law that allowed the country to circumvent the European Union’s regulatory regimen, and its regulatory agency fast-tracked the review of the Pfizer vaccine.

The speedy approval has fed concerns about safety, though British regulators have repeatedly said they have not taken shortcuts. Regulators there not only review trial data, but also the manufacturing processes of vaccines and controls.

In the U.S., the Food and Drug Administration will decide on emergency authorization for the Pfizer vaccine shortly after a meeting of an advisory panel on Dec. 10. The European Union, like the F.D.A., has planned a high-profile meeting with outside experts who will weigh in on the vaccine, on Dec. 29, and a decision on authorization is expected several days later.

When will kids get a vaccine?

When it comes to developing vaccines and tests, children are last in line.

In the medical field, they are considered a protected group, along with pregnant women, and often require special consideration before they are included in clinical trials. Denise Grady, who covers science for The Times, told me that this special status for minors can be a double-edged sword.

“You protect them from possible harm,” Denise said. “But then if a vaccine or treatment is OK, they are the last to get it because you’ve delayed testing it in them.”

Two recent reports underscored how children should not be treated like miniature grown-ups when it comes to the coronavirus.

A growing body of evidence now suggests that some rapid tests for the coronavirus may fail in children, letting low-level infections slip by unnoticed. With some schools relying heavily on these tests to remain open safely, health experts say the findings should prompt more in-depth studies of diagnostic tools for the virus among minors.

When it comes to vaccines, none can be given to children until they have been tested in pediatric trials. The drug maker Moderna said today that it would soon begin testing its vaccine in children aged 12 to 17, and would like to recruit 3,000 volunteers. (Pfizer began testing its coronavirus vaccine in children as young as 12 in October.) Some experts have argued that the trials should have started earlier because Moderna’s approach could delay the day when children can safely receive vaccinations.

“It may seem like children are an afterthought in medical research,” Denise said. “But really, it’s a tough balancing act between protecting them from potentially harmful experimentation and yet making new vaccines and treatments available to them as soon as it can be done safely.”

Eight cricket players from Pakistan tested positive for the coronavirus in New Zealand.

Europe is divided over how to deal with the upcoming ski season. Some countries, like Austria and Switzerland, are choosing to open, while others, like Italy, Germany and France, vowed to remain shut or put in place significant restrictions.

The pandemic is accelerating in Delaware, where daily reports of new cases are up 50 percent from two weeks ago. The state has been newly thrust into the limelight as President-elect Joe Biden builds his administration from his home in Wilmington.

A new examination of how millions of students have fared academically during the pandemic shows that they may not have yet suffered as much learning loss as educators and researchers had feared.

The pharmacy chain CVS has reached a deal with the federal government to give out a Covid-19 antibody treatment in patients’ homes and in long-term care facilities.

Brazil’s Health Ministry said that it would give Indigenous people and the elderly priority when a vaccine for the coronavirus becomes available, but it remains unclear how soon the first Brazilians will be immunized.

A “pandemic effect” is driving a rise in applications to medical schools, which are up 18 percent from last year.

I’ll be honest in that I cannot deal with a pandemic and social distancing. So I live mostly as if there is no pandemic, except that I always wear my mask and am mindful of when I am in places of essential business like grocery stores. Where I live the bars are still open late and I always go out to let out steam and socialize. They are getting more and more full over time as more people are becoming pandemic fatigued. I feel bad sometimes but also I have to survive. This is the most difficult situation I have ever faced, including my divorce in 2019.

Email your thoughts to [email protected] Did a friend forward you the briefing? Sign up here.