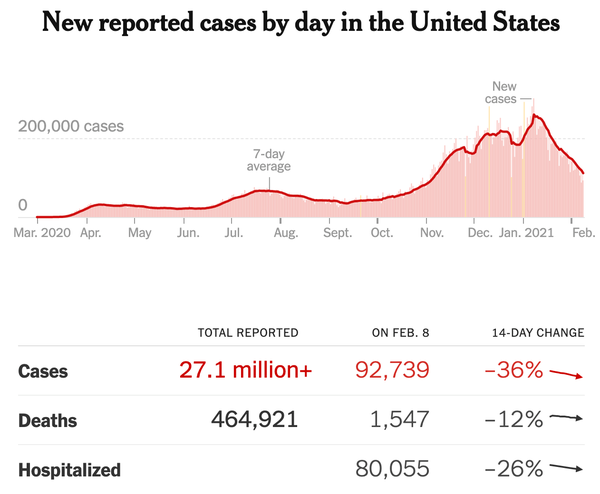 W.H.O. scientists tracing the pandemic’s origin in China said the coronavirus was “extremely unlikely” to have been the result of a lab accident.

A study found that people with dementia were twice as likely to get Covid-19.

The Biden administration will begin delivering coronavirus vaccines to a network of clinics in underserved areas.

Latin America is experiencing a surge of cases that rivals the worst of the summer.

In Mexico, the resurgence of the virus has infected more people than ever, including the country’s president, and hospitals are so full that many infected patients have been forced to recuperate at home.

In Bolivia, intensive-care units are full and bodies are piling up in homes and on the streets, much as they did last summer.

In Brazil, deaths have matched their summer peak as a powerful new variant spreads throughout the surrounding region.

Mexico is suffering from a severe shortage of oxygen tanks, which has led to a thriving black market. Organized criminal groups have been hijacking trucks filled with oxygen tanks, or stealing them at gunpoint from hospitals, according to media reports.

The smallest tank in Mexico can cost more than $800 — up to 10 times the price in the United States — and filling up a tank with six hours of oxygen can cost about $10.

My colleagues Natalie Kitroeff and Oscar Lopez, who cover Mexico for The Times, have described long lines that stretch for blocks where people wait to refill tanks for their relatives. One man they spoke to recalled the desperate pleas he heard in the long lines now common across Mexico City: “My father is at 60 percent oxygen saturation. My brother is at 50 percent saturation. My wife can no longer breathe. She’s turning blue, her lips are blue, help me.”

In Bolivia, experts believe the higher mortality rate may be caused by the more contagious variants originating in Brazil and elsewhere, but they lack the instruments to analyze the viruses’ genetic code.

The virus bounced back in the region because officials — citing pandemic fatigue and concerns about the economy — have been resistant to restore the containment measures that curbed the virus during previous waves. Before the latest outbreak in Mexico City, the authorities delayed shutting down nonessential businesses for weeks, in spite of soaring case rates. Officials eventually tightened restrictions, but many Mexicans defied government pleas to stay home during the holidays.

Officials in Latin America are also pointing to vaccination campaigns as a reason to avoid lockdowns, even though few countries in the region outside of Brazil have procured a meaningful number of doses.

Karen Crouse, a Sports reporter, who has been in Melbourne covering the first major international sports tournament of 2021, spoke to my colleague Melina Delkic, who writes the Asia edition of the Morning Briefing. They talked about safety measures and what it’s like to be somewhere seemingly normal.

What’s the feeling at the Open and in Melbourne?

People are feeling cautiously optimistic, but there is apprehension that I don’t think anyone in the U.S. could understand. There are health checks for everybody who enters the grounds. You have contact tracing.

In Melbourne, they had a 111-day hard lockdown, where they had a curfew and they couldn’t venture more than three miles from their homes. Only one person could go grocery shopping. Everyone here made individual sacrifices for the collective good.

They really are proud of what they collectively did to subdue the coronavirus. They don’t want a sporting event to be the cause of rolling back all of the gains they’ve made.

Is there anything that’s changing in the way tennis is played?

There are no line judges. They’re trying out an electronic system — this could end up being a technological advancement. Other than that, it’s marvelously normal. It’s almost a relief to see and feel how normal it seems. But there were fewer than 20,000 people on the grounds, and that’s much less than normal.

Another angle. Matt Futterman, a sports journalist, who is also at the Australian Open, wrote about how the event delivered a glimpse of what sports can one day be again.

The United States is on the verge of administering 1.5 million doses a day, nearing a goal President Biden set shortly after taking office last month, but state leaders still warn of limited supplies.

The 27 countries in the European Union are trying something unprecedented: casting their lot together in the vaccine hunt.

The AstraZeneca vaccine’s ineffectiveness against a fast-spreading coronavirus variant was bad news not just for South Africa, but also for other countries who were counting on the shot for their vaccine campaigns.

House Democrats rolled out a plan to send $1,400 stimulus payments to Americans earning up to $75,000 a year.

Many universities tried to ramp up testing protocols in the spring semester — but they have been no match for coronavirus variants and uncooperative students.

New York’s vaccine websites weren’t working, so a 31-year-old software engineer who works for Airbnb built one for $50.

Here’s a comprehensive guide to the coronavirus variants.

I am listening to all my old vinyl albums from the ’60s and ’70s to decide which to keep and which to sell to our local music swap shop. It’s time, and I have the time. Oh the memories!