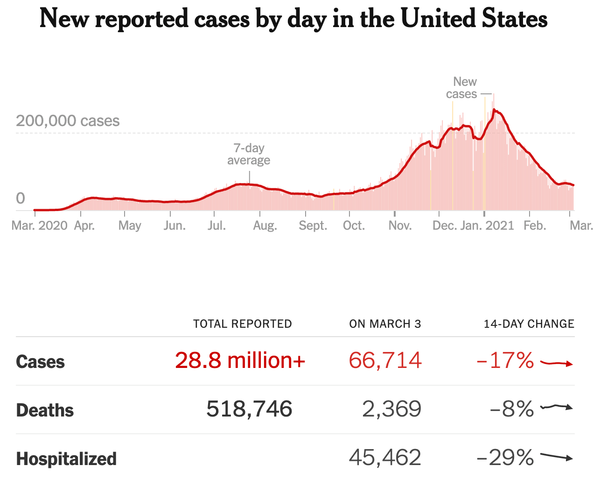 Italy blocked a shipment of AstraZeneca vaccines headed for Australia.

One shot that goes a long way

Health officials have worried that some people may see the vaccine from Johnson & Johnson as inferior to those from Pfizer and Moderna, but the initial rollout of the new shot is turning that notion on its head.

From a public health standpoint, the latest vaccine is shaping up to be the best choice for many people, including for the country’s most vulnerable populations.

Because it’s a single shot, the Johnson and Johnson vaccine can offer protection for those who might not have access or time for a second shot — like people in rural areas, migrant workers, those on the verge of release from prison and meatpacking plant workers, among others. Dr. Joseph Kanter, the top health official in Louisiana, called it “a potential breakthrough.”

In North Dakota, Johnson & Johnson doses will be put to use at pharmacies and urgent care clinics where people don’t have regular access to health care. In Missouri, most of the state’s Johnson & Johnson doses are going to community health centers, which are taking advantage of the easier storage conditions because the vaccine doesn’t require ultracold temperatures. And in North Carolina, health providers are holding a series of events to inoculate meatpacking, farm and grocery workers.

The vaccine also tends to have fewer side effects than other options, and it may be a better choice for people who don’t want to risk missing a day of work to recover from chills or fever.

Importantly, it may also help address vaccine inequality. The Johnson & Johnson vaccine’s comparatively easy delivery may allow states to use it to target communities with low inoculation rates. Darrell J. Gaskin, a professor of health policy at Johns Hopkins University and a pastor, has been counseling Black churches across the Mid-Atlantic so people “don’t feel like there’s a luxury vaccine and then the non-luxury vaccine.”

“How do we reduce disparities?” he asked. “We get a product out that’s one dose and that’s stable.”

In-room quarantines in college dorms can be risky. Confining students to their rooms — and cutting them off from healthy distractions like friends and exercise — can invite a host of mental health issues.

That’s why after Col. Mark Anarumo, the president of Norwich University, a private military college in Vermont, ordered in-room quarantines early this year for returning students, he wanted to place himself on the front lines of the battle against the negative effects of dorm isolation. So he moved in.

“I am concerned enough about the mental health on campus that I believe we may have a suicide if we do not break the pressure and let people leave, and incentivize their departure,” he said.

From the dorms, he learned more about the lives of students and spoke to them about their personal issues and complaints about residential life. (To relate, he drew on his own experience spending days in foxholes in Iraq and Afghanistan.)

The school’s quarantine eventually came to an end in mid-February, and Dr. Anarumo moved out. But he still worries about what students may be going through in their rooms. “I will always be scared to death,” he said. “Even when everything’s perfect.”

He plans to return to a dorm on campus this month.

California will direct 40 percent of new vaccines to low-income communities.

In Ghana, vaccines are being delivered by drones and temperature-controlled trucks.

In a pilot program, officials in Austria will carry out a mass vaccination drive in the western district of Schwaz, which has been battered by a surge in new coronavirus infections driven in part by the South African variant.

As Palestinians in the West Bank clamored for vaccines, their leaders diverted shots to a favored few.

France vowed to vaccinate at least 10 million people by mid-April.

The World Health Organization warned that Central and Eastern Europe is experiencing a resurgence in coronavirus infections partly driven by new variants but also by the relaxing of restrictions.

Residents in states that have recently eased virus restrictions are split on whether it’s a good idea. Here’s what they’re saying.

Pope Francis’ planned trip to Iraq flies in the face of nearly all public health guidelines.

In The Times’s Opinion section, two professors write that signs are pointing to a sizable pandemic baby bust in the United States, with implications that will be with us for years.

Mira Rosenblatt, a Holocaust survivor, showed up at a New York City hospital for a vaccine, and charmed the staff with her incredible life story.

The San Diego Zoo has given nine apes an experimental coronavirus vaccine for animals.

The Times is asking readers: When did the pandemic become real for you?

This past year I moved to college in Georgia, my mother moved to California, while my dad and siblings stayed in Arizona. Being in different places during this pandemic is extremely hard, since we cannot find solace in being together as a household during this time of isolation. For me, college has been extremely lonely. We have managed to make it through by having family calls nearly every night, and sometimes we send funny pictures through text. My family gives me hope for a better future.