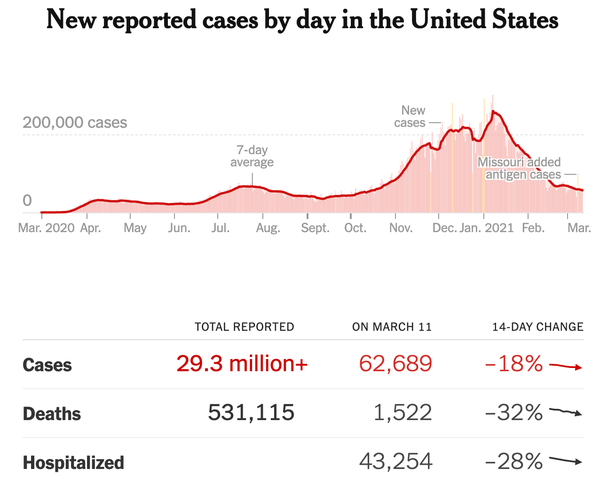 In his prime-time address on Thursday, President Biden said he was directing states to make vaccines available to all adults by May 1.

The U.S. will partner with Japan, India and Australia to expand the global vaccine supply.

The case for optimism

So much of this newsletter can be doom and gloom, but today we’re going to talk about a sunnier outlook. This week I heard that my colleague Ezra Klein, an Opinion columnist, was working on a podcast episode about the near future of the pandemic that was highly optimistic. That was surprising news, given that just a few weeks ago Ezra penned a rather bleak column about the virus.

So I spoke to Ezra about how he arrived as his new outlook, and what he thinks the next few months may hold.

You recently wrote a pessimistic column that focused on the possible fallout from the variants. What changed?

Back then, there was this interesting collision between reasons to be optimistic and reasons to be terrified. Cases were falling nationwide, and vaccinations were moving, but still pretty slowly at that point. At the same time, we knew the hyper-contagious B.1.1.7 strain was already here. And so when I talked to experts, it seemed as if we were potentially set up for a really scary couple of months.

What happens instead is cases fall and they keep falling. The places with the variants get them under control, including Britain, Portugal and South Africa. You see falling cases almost everywhere. And that’s happening in places with very different policy equilibriums, very different vaccination rates and very different strains. So that really needs to make you start thinking, OK, this is not the forever problem that it felt like recently.

But isn’t there a possibility that the variants could still trigger a deadly surge?

Yes, but let me say something, and I have to be really careful about the way I say it. I think that we in the media are terrified to be caught being optimistic right now. There’s a real pressure to focus on what still could go wrong, instead of what’s going right. Absolutely, there are variants out there that could emerge and destroy our progress. But what we’re seeing right now is that all of the vaccines are effective against all of the variants out there. There doesn’t seem to be a circulating variant that has a real vaccine immunity. And the variants are currently under control, at least in America and in most countries. And so, at least in countries where vaccination is moving rapidly — and America is one — the future looks bright.

I also think recognizing the good news helps with the ask we still need to make of people: Hold on for another couple of months. We really think if you do hold on just for like another 45, 60 days, that this whole world is going to be different. That’s a really different ask than: We don’t know what the variants will bring, so just keep holding on.

What role is the vaccine rollout playing in your current optimism?

A heavy role. So going back a couple of weeks, we were seeing around a million vaccinations a day, constrained supply and a lot of confusion in the system. Now we’re doing more than two million vaccinations a day. And everybody I’ve talked to says that vaccine supply is going to basically go vertical. And so at this pace, we’re going to have the country substantially vaccinated pretty quickly.

You know, Israel has vaccinated millions of people, and it has seen only a handful — like a literal handful — of hospitalizations or deaths from the coronavirus among that population. That’s an extraordinary level of effectiveness. So I think there’s reason to be really, really affirmed here.

What do you think the next few months look like in the U.S.?

What I think is going to happen is, two months from now, vaccinations are going to be everywhere. The place is just going to be flooded with available vaccines.

Then I think that we’re going to hit a tipping point not too far from now, assuming vaccinations keep up and nothing goes unusually crazy, where reopenings start happening really fast and at a rate that people aren’t really ready for. Because once they happen in some places, and they work, there is going to be unbelievable pressure to do them everywhere. So I think that we could be looking at a return to something much closer to normalcy, but not full 2019-style operations, by the end of May. But that is a prediction, not a promise.

What do you think is the biggest challenge to this optimistic viewpoint?

So I think there are a couple of things. A state’s reopening too quickly could create some real damage, both in terms of people getting coronavirus and dying when they were really close to safety. And also, if that happens, it’s going to push everybody else’s timetable back. For that exact same reason, there are the more contagious strains that are out there. So if you completely let up on the brakes in some of these places, you could have really fast infection increases and that would be really dangerous. And then if there’s anything that disrupts vaccine supply and distribution in the country, that’s always going to be a really big deal.

My optimism here is built on the pace of vaccinations in the U.S. But if we don’t figure out how to vaccinate the world quickly, then that’s billions of people the coronavirus could harm, kill or use to mutate into a vaccine-resistant form. So we can’t just think this is over when it looks over for us. For reasons both selfish and altruistic, we have a global responsibility here.

So you said we might return to something close to normal in May, but when do you think we’ll be back to 2019 levels of normal?

I have an exchange in my latest podcast with Dr. Ashish Jha, a health policy researcher at the Brown University School of Public Health, where he says something like there’s no going back to 2019 normal. And I’ve heard something like that a lot. But I think there are two versions of “things will never go back to 2019 normal” that people mean. There’s one version where what people are saying is it’s never going to be safe to do certain things again. And that doesn’t seem true.

On the other hand, as Dr. Jha says, pandemics change societies. So I think remote work is going to be more common. He was saying that he thinks there will be fewer 500-person lecture halls. It may take a long time for people to feel comfortable with activities that have once again become safe — there will be trauma and PTSD on a societal level from all this. So there may be social reverberations from this that may last longer than people think. That said, they also may not. I always think people underestimate the human animal’s ability to adapt and to snap back to an equilibrium.

Hungary has agreed to pay about $36 a dose for the Covid-19 vaccine made by Sinopharm, a Chinese state-owned company. That price far surpasses what the European Union has agreed to pay for vaccines from Western manufacturers.

In the U.S., four former presidents and their first ladies appear in a new public service campaign with a plea for Americans to get vaccinated.

Michigan is expanding vaccine eligibility to everyone age 50 and over as of March 22, and everyone 16 and over from April 5.

More countries paused the use of AstraZeneca’s vaccine, including Bulgaria and Thailand, despite its support among global health authorities.

India recorded one of its worst single-day increases in cases since late December.

Italy’s government said that restrictions would be severely tightened across much of the country to beat back a surge in infections.

A Reuters/Ipsos poll found that a growing number of Americans support restrictions for unvaccinated people in workplaces, airplanes and other aspects of public life.

New surveys show that during the pandemic, older adults tended to be more positive than younger ones, suggesting that the ability to cope improves with age.

I am planning my daughter’s wedding for the third time. Save the date cards went out. Then came change the date cards. Now we are sending “no really, this time we are serious” date cards — along with a strip of 50-50 raffle tickets (they reflect the odds that the wedding will really happen). Booking a Saturday at a wedding venue is proving more difficult then scheduling a Covid vaccination appointment! Through all the craziness, the wedding is our ray of hope. A promise of better times to come and the belief that we will be celebrating with family and friends.