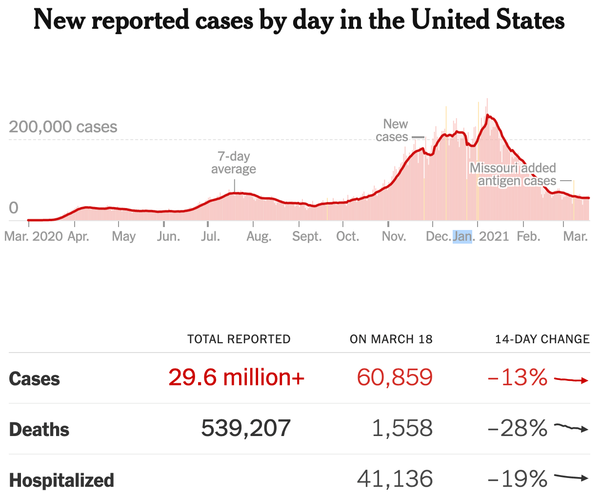 The C.D.C. said that children in elementary schools need to be kept only three feet apart when wearing masks, versus six feet previously.

France resumed the use of AstraZeneca’s vaccine for people over 55.

The F.B.I. is investigating whether the Cuomo administration gave the Justice Department false information about Covid deaths in nursing homes.

More Americans are eligible for doses

States are racing to expand vaccine eligibility to all adults as part of a sprint to meet President Biden’s goal of universal vaccine access by May 1.

At least 18 states have said they will open vaccination appointments for the general public in March or April. Officials expect a surge of doses to become available in the coming weeks, which should increase the pace of inoculations from the current rate of about 2.5 million a day.

In Utah, universal eligibility will begin next week. In Ohio, it starts March 29; in Montana, it’s April 1; and in Connecticut, April 5. Illinois, Kentucky, Rhode Island, Maryland and Missouri have all said that every adult will be allowed to sign up for a dose in April. Florida plans to open eligibility for all adults in the coming weeks.

President Biden said yesterday that the U.S. was already set to hit his goal of administering 100 million vaccine doses in 100 days — six weeks ahead of his self-imposed deadline. So far, the country has delivered more than 151 million doses to the states, with about 77 percent of those having already been administered.

The recent success of the vaccination campaign has even inspired some officials to speak more openly about what post-pandemic life may look like.

“As more Montanans get the vaccine,” said Gov. Greg Gianforte, “we will begin to approach the time when we are no longer in a state of emergency and we can remove our masks and throw them in the trash.”

Capitol Hill holdouts: As the country approaches universal access, there will undoubtedly be more signs of vaccine hesitancy — with Congress as Exhibit A.

A quarter of congressional lawmakers have yet to get coronavirus vaccines, even though they have all been eligible since December. A handful of Republicans said they don’t ever intend to take one. The reluctance mirrors broader trends in the country, especially among Republicans.

Who’s in, who’s out: Turning down a vaccine remains a luxury for most of humanity. As a new Times investigation starkly illustrates, getting vaccinated today means living in the right place, knowing the right people, or both.

Arts on the brink

Artists and institutions are struggling after a pandemic year of financial turmoil.

The Metropolitan Opera cellist Joel Noyes sold his 19th-century Russian bow and now uses his childhood one — a switch he likens to going from a Ferrari to a Camry. He and his colleagues, who have gone many months without pay, are scheduled to get their first partial paychecks this week. The music director, Yannick Nézet-Séguin, called the drought “increasingly unacceptable.”

The Association of Art Museum Directors loosened a prohibition on selling of art to pay bills, and museums have taken advantage: The Brooklyn Museum has raised close to $35 million at auction, and the Metropolitan Museum of Art may follow to address a $150 million budget shortfall. But discussions about making the change permanent have grown heated.

Roadies — the backstage professionals who make concerts and other performances possible — are opening up about their struggles as well. Half of the 1,700 touring crew members surveyed by British organizations have experienced depression; London’s Back Lounge hosts a weekly online support group with therapists and personal trainers. “I didn’t know I needed it, but I needed it,” a lighting supervisor told The Times.

Meanwhile, performance venues are starting to open slowly. This week, theater critics in New York got their first invites to an Off Broadway indoor performance in more than a year, for an adaptation of José Saramago’s novel “Blindness.” Two Times critics discuss whether to go.

In Nepal, a Bahraini sheikh arrived with 2,000 Covid vaccine doses in exchange for a Mount Everest trek.

Kyiv, the Ukrainian capital, is about to become the latest European city to go into lockdown. Just 0.2 percent of Ukraine’s population has been inoculated.

New York City’s public school system will give families another chance to enroll their children in in-person classes following new guidance from the Centers for Disease Control and Prevention.

The Times reviewed “A Shot in the Arm!”, a “fascinating and enlightening,” kid-friendly graphic novel about the history of vaccines.

In a sign that Americans may be eyeing a return to normal life, The Washington Post reports that they’re beginning to buy more regular clothes again, including work wear, dresses and tuxedos.

Easter, Passover and Ramadan are on the horizon, but experts say we can’t let down our guard just yet. Here’s how you can celebrate spring holidays safely.

Not everyone stayed home during the pandemic. Some spent the last year hitting the road, while others took to the sea.

How am I doing? In a nutshell, not great. My kids who are virtually schooling are high-functioning special needs and require quite a bit of oversight from me. In addition, I’m dealing with a lot of pressure from my job. Covid protocols there are nonexistent, and I’ve been working from home a good deal of the time to reduce my potential exposure. My boss has threatened to cut my salary if I continue to work from home, and I’m constantly under scrutiny. In truth, I recognize that this time spent in lockdown is precious. We do family movie nights. I do what I can to keep everyone’s spirits up. But while I’m absorbing everyone’s frustration and sadness, I never really stop to deal with my own.