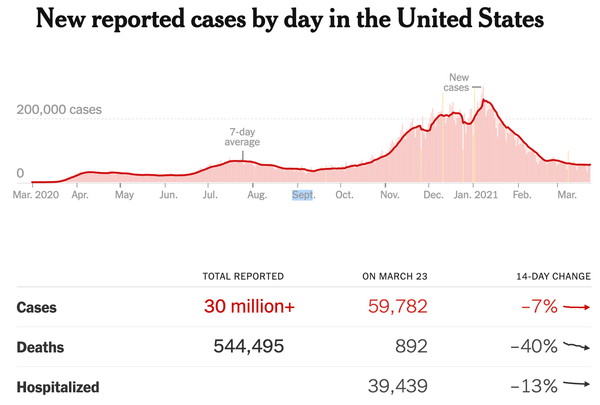 More than 40 states say they will meet or beat Biden’s May 1 deadline for vaccine eligibility for all adults.

Moncef Slaoui, the former head of Operation Warp Speed, was fired from a biotech company after sexual misconduct allegations.

A federal survey found that more than 40 percent of U.S. students were learning remotely in January.

The European Union is preparing to curb vaccine exports for the next six weeks in response to an acute supply shortage — just as a third wave of cases is taxing hospitals and sending country after country into lockdown.

The emergency legislation would make it harder for pharmaceutical companies to ship vaccine doses abroad. Critics say exports are a key reason for an embarrassingly slow vaccination campaign, even though the E.U. is a leading vaccine producer. More than 40 million doses have been exported to 33 countries since February, compared with 70 million kept at home for the bloc’s 27 nations.

By contrast, the U.S. and Britain have locked up nearly all domestic production for their citizens. Only around 10 percent of E.U. citizens have been vaccinated, compared with 40 percent of Britons, a quarter of Americans and nearly 60 percent of Israelis.

The E.U. legislation would mostly affect AstraZeneca, which promised the bloc more than 100 million doses in the first quarter of 2021 and delivered just 16.6 million, although it could also affect the Pfizer and Moderna vaccines.

Meanwhile, Italian authorities discovered a cache of 29 million AstraZeneca doses languishing in a storage facility. The stockpile raised suspicions that the company was planning to export them to Britain or elsewhere, which the E.U. asked the company to stop doing until it fulfilled its contracts on the continent. AstraZeneca told E.U. officials the doses were meant for the E.U. market and the Covax initiative, which sends doses to poorer counties.

Wealthy and middle-income countries have received about 90 percent of the more than 400 million vaccines manufactured and shipped worldwide to date, in part because of their partnerships with drug companies. Russia and China have promised to fill the void as part of their vaccine diplomacy.

Despite the hand-wringing over the rollout, E.U. leaders say they can still vaccinate 70 percent of the continent by this summer, and the bloc has ordered enough doses to vaccinate its population three times over. Other countries will have to wait years to inoculate their entire populations.

Recognizing that workers have spent inordinate amounts of the past year staring at video calls, Citigroup, one of the world’s largest banks, is encouraging its employees to take a break with “Zoom-free Fridays.”

The move is an attempt to address “Zoom fatigue,” a widespread feeling of burnout that has emerged during the pandemic.

Research has found that the phenomenon is exacerbated by the excessive eye contact involved in video calls, the unnatural situation of staring at our own image onscreen, having to stay in the same fixed spot and the extra effort required to interpret nonverbal communications.

Without the structure and routine of office life, many people have also fallen into the trap of working longer hours, which may equate to two additional hours a day for some people.

Aaron Balick, a psychotherapist, said that while “Zoom-free Fridays” had the right spirit behind them, employees need more opportunities for uninterrupted work.

“If you’re doing back-to-back Zooms Monday through Thursday and then have a day off Friday, that’s still not quite good enough,” he said.

Hong Kong suspended use of the Pfizer-BioNTech vaccine because of packaging defects, ranging from cracked containers to loose caps, that were discovered in a single batch.

A hospital on Maui had to throw out nearly 1,400 vaccine doses after a refrigerator was not closed properly, The Associated Press reports.

Turkey will begin administering the Pfizer vaccine after receiving about 1.4 million doses this week.

The World Health Organization said that virus deaths and cases were on the rise again around the world, as more contagious variants have spread and restrictions were relaxed.

The Associated Press reports that a new and potentially dangerous variant of the coronavirus has been detected in India.

Canadian researchers who scaled up a rapid coronavirus testing program are now trying to replicate its success in the United States.

Germany scrapped an unpopular plan to shut down the country for two extra days over the Easter holidays.

Wealthy Americans are getting inoculated in the U.S. Virgin Islands, where the governor said that about 3 percent of vaccines had gone to tourists.

A Massachusetts company that makes laboratory equipment created an air sampler to monitor airborne pathogens, including the coronavirus.

A new study in the U.K. found that seven in 10 Covid patients had not fully recovered after five months, The Guardian reports.

My dear friend is fighting for her life in the I.C.U. I want to scream from the mountaintop: “Don’t let your guard down!” She took care of my father for a decade, protected him from Covid-19 during the early days, and held his hand while he took his last breath at home. She has spent her entire life caring for others — she lies alone without the caring touch and reassurance of family and friends. We are grateful to the team who’s caring for her. I am so angry, I could scream. Instead, I stop and tell anyone who will listen.