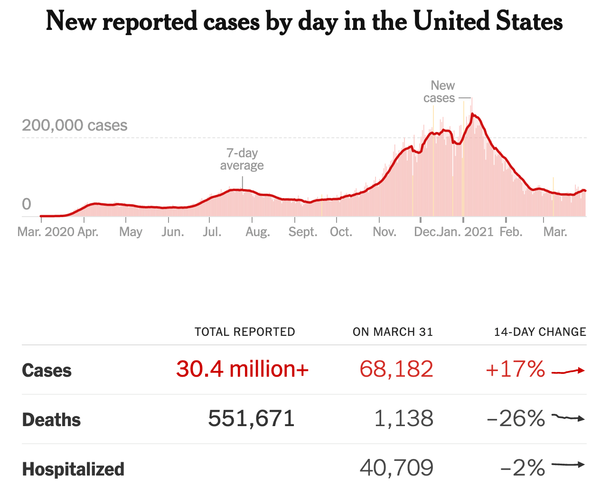 Maine will open Covid-19 vaccination to anyone 16 or older on Wednesday. Virginia will do so on April 19.

Hungary plans to ease restrictions, despite having one of the world’s worst per capita death rates.

Air travel within the U.S. to vacation spots is bouncing back.

Two states, and the Covid race

The United States is in a perilous race between vaccinating residents as quickly as possible and succumbing to a new wave of infections driven by the faster-spreading variants.

Nationally, the number of cases has begun to tick up again, even as the vaccination campaign has quickened and the country is approaching universal eligibility for all adults. Two states — Michigan and Maryland — show the issues on both sides of the struggle.

Michigan is giving the country a glimpse at the threat of the new surge, as the state is facing one of the most alarming outbreaks in the country. Cases have soared to more than 5,600 a day from about 1,000 in late February. The nation’s top five metro areas in recent cases per capita are all in Michigan: Jackson, Detroit, Flint, Lansing and Monroe. The state’s hospital system is being stretched thin as the number of coronavirus patients has doubled in the last month, to more than 2,200.

Health officials attribute the rise in cases in part to the B.1.1.7 variant, which is widespread in Michigan. But they also say that relaxing virus regulations, mask-wearing and social distancing has played a role. Restaurants are busy, and crowds of people gather unmasked in hotel lobbies and bars.

Maryland is demonstrating the challenges that still face the vaccination campaign, because it has encountered nearly all of them. They include poor urban neighborhoods and isolated rural areas with lack of access to regular care; wealthy Washington suburbs whose residents have vacuumed up shots meant for other ZIP codes; and a headache-inducing sign-up system.

To address these issues, the state is planning on opening four more mass vaccination sites this month and has begun adding primary care doctors to the effort. But it will also rely on churches, storefront service organizations and vaccine-stocked vans.

The biggest hurdle in Maryland, and across the country, is still supply. “We’ve deployed people like you wouldn’t believe,” said Dr. Maulik S. Joshi, the president of a local hospital system. “We’re hiring. We’re ready to go. It’s not a cost issue or a people issue for us, it’s just a vaccine issue.”

A mix-up at a Baltimore plant contaminated up to 15 million doses of Johnson & Johnson’s vaccine. The incident, which occurred several weeks ago, forced regulators to delay authorization of the plant’s production lines.

None of the doses ever left the plant, and the lot has been quarantined.

The plant also manufactures the AstraZeneca vaccine, which has yet to be authorized for use in the United States. Workers accidentally conflated ingredients from the two vaccines several weeks ago, and the mistake went undiscovered for days until Johnson & Johnson’s quality control checks uncovered it. The mistake raises questions about training and supervision at the manufacturer, Emergent BioSolutions, which has also faced fierce criticism for its heavy lobbying efforts.

A total of 24 million future doses of the one-dose vaccine, which has been credited with speeding up the national immunization program, now hang in the balance as the Food and Drug Administration investigates. Federal officials still expect to have enough usable vaccines between Johnson & Johnson and the other two approved vaccines to meet President Biden’s commitment to provide enough vaccine to immunize every adult by the end of May.

In the U.S., the Biden administration began a vaccine-safety public awareness campaign with more than 200 organizations for communities with heightened skepticism

Hong Kong will resume use of the Pfizer-BioNTech coronavirus shots next week amid an investigation by the German manufacturer into packaging defects that were discovered in two batches.

A new study found that coronavirus variants can infect mice, although infected rodents pose no immediate danger to humans.

Child-care centers improvised during the pandemic, scrambling to stay open with razor-thin budgets and little government guidance. But will the short-term solutions last?

President Biden said that the Texas Rangers’ decision to open their 43,000-seat stadium to full capacity was “a mistake.”

Here’s everything you need to know about your small white vaccine record card, why it’s important and how to keep it safe.

I find myself angry. So angry I can hardly go anywhere, because I want to be the mask police. I want to yell “cover your nose,” and “put on that mask,” and “don’t get so close to me.” I want to scream: “What’s the matter with you, don’t you listen? Don’t you care about me or you or anyone else?” Of course, I don’t. I don’t want to get punched in the face, or followed, or harassed. I’m tired of watching the numbers and being scared. I want this thing to go away, and I want everyone to help that cause.