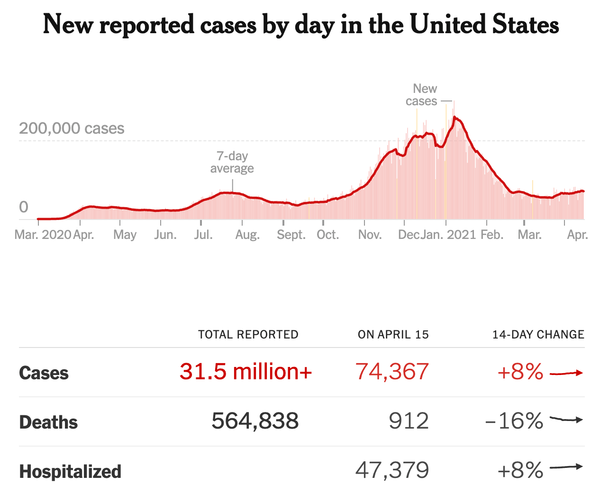 The White House detailed a nearly $2 billion plan to enhance the tracking of variants.

A French minister said the E.U. was unlikely to buy new doses of the AstraZeneca and Johnson & Johnson vaccines.

Angela Merkel received a dose of the AstraZeneca vaccine.

A year into the pandemic, many of us are looking back to make sense of what happened, or searching for lessons as we slowly begin to emerge from the struggles of the past year.

Today, I’m checking in with a few of the stories and people that have resonated most with readers of this newsletter.

At the beginning of the outbreak, Jessica Lustig, an editor for The New York Times Magazine, wrote about her husband’s terrifying battle with Covid-19. I recently caught up with Jessica, one year later.

First, how is Toby doing?

He has largely recovered, but his recovery is slow, and he is considered a long hauler. In the weeks that followed his acute illness, his whole nervous system seemed deregulated. He would have soaking sweats, and he was getting these arbitrary sensations of electrical shocks and burning. He also had terrible nightmares. And since then, he has had neuropathy in his feet, which means that his feet and his toes go numb and are very painful.

Toby continues to fear that he has been permanently physically changed. There’s a fear that the coming years may bring new consequences that aren’t even known now. And I know that’s really scary for him, and for so many people who have been just as ill and much worse.

How have you and your teenager, CK, been since you published the story?

I had assumed that we didn’t get sick, because I thought getting sick meant how sick Toby was. CK tested negative for antibodies, but one day I said, “Oh, your shoes are too tight. They must be rubbing you because you have a blister on each toe.” But it turned out to be Covid toes, which is a common symptom among young people. CK still has them.

For me, probably in the second week of his illness, I felt as if I was fighting something off. I never got worse, so I was like, “Oh, I didn’t get it.” But then I wound up having antibodies, so, clearly, I was infected at some point.

It’s clear to me now that we all probably had some version of PTSD. I remember at one point a pot lid clattering in the kitchen, and I reacted as if it was a gunshot. I physically cringed and cowered. I was so wired at all times because I felt like I was going to have to make an emergency decision at any given moment.

Have you managed to return to some sort of normalcy?

I think because of our experience, I have felt as if I could not take chances. I mean, I have antibodies, but I have not eaten inside a restaurant, for example, and wouldn’t until we’re all vaccinated. We never did the “pod” thing, and I didn’t ride the subway for a long time.

But deep into the fall and winter, I began to see that deep sense of isolation and fear — especially for my child, an older teenager. That’s exactly the age when you’re not supposed to be in your bedroom or under your parents’ eyes at all times. You’re supposed to be navigating the world and connecting with your peers and your friends.

What will you take away from this experience?

I’ve learned so much more about how isolating it is for anyone who goes through a serious illness at home and how much your world shrinks. Something that a dear friend who had cancer once said, that really resonated with me, was that some people don’t know what to say. Some people say nothing. Some people in your life will not show up. Some people will show up and just say, “Let me know if there’s something I can do,” which isn’t really helpful.

I remember thinking how fortunate we had been, and how people showed up for us. And I tried to pay that forward when I learned of other people I knew who were caring for loved ones, or worried about loved ones who were sick with the virus.

What do you want people to take away from your story?

I always wished for people to know what it was really like. And if they knew what it was really like, they might understand that we all have a role to play in protecting one another and preventing as many people as possible from going through what we went through. And we were lucky — Toby is alive, and there was a period when neither of us thought that was going to be the case. But in the end, I just wished that people would not have to experience something like this — or much worse, as many others did.

Catching up with readers

During the past year, thousands of you have written in to tell us how you’re coping during the pandemic and I’ve featured many of your responses in our “What you’re doing” section. Often, other readers wrote in to say how much the words from this section connected with them. Frequently, many of you wanted to know more.

One of the submissions that received the most comments was from Chris in Prague, who had worked with his wife to build a transportation company, but lost his savings and was worried about losing his house. Since his submission, a friend started a GoFundMe page for him, and things have turned around.

“We have gone from literally searching for change to buy bread to knowing we don’t have to worry about it for a while, and we have been able to make a mortgage payment and pay some utilities,” Chris recently wrote. “The biggest improvement is our morale. We have been honestly brought to tears by the generosity of not only our friends but even their friends — people we don’t even know. My biggest takeaway from this is to let people know you are having a hard time, swallow your pride and tell them you need some help.”

In November, Mary J. Craig from La Conner, Wash., wrote about an activity that she was doing with her daughters. Every week, they would ask her a question about her life that she would respond to in story form. Her daughters gathered her answers, and they planned to organize her stories into book form at the end of the year. Many of you wanted to know the question prompts they were using.

Here are a few examples: What is one of your fondest childhood memories? Are you more like your father or your mother? In what ways? What is one of the bravest things you’ve ever done, and what was the outcome? Have you pulled any great pranks?

Finally, an update from Amanda Marie in Atlanta. In December, she wrote in with the provocative headline: “Covid is my friend.” Her 90-year-old husband was in hospice care at home, and the pandemic allowed her time “at home, just the two of us, for whatever time we have left together and we are grateful.”

Amanda recently sent in this update.

“I wrote that my 90-year-old husband and I didn’t have to make excuses while he was on home hospice, and we were happy to be isolated and together for the time he had left. He died last week. Now, I have no shoulder to cry on, no hand to hold, no hugs. Flowers and food are left on the doorstep. Covid is cruel in bereavement. No, Covid, you are no longer my friend.”

The Centers for Disease Control and Prevention said it had scheduled a new emergency hearing to consider restarting Johnson & Johnson shots for April 23.

Pfizer’s chief executive said that people would “likely” need vaccine booster shots within a year of being inoculated, followed by an annual re-vaccination.

Australia said its third case of a rare blood clotting disorder was very likely linked to the AstraZeneca vaccine.

Babies and children in Brazil are dying at alarmingly high numbers from Covid-19, The BBC reports.

Italian authorities have uncovered a rash of vaccine line-cutting by younger people.

Johnson & Johnson privately reached out to other Covid-19 vaccine makers and asked them to join an effort to study the risk of blood clots and address concerns as a single entity, but Pfizer and Moderna declined, The Wall Street Journal reports.

Vaccine hesitancy runs high in some African countries, in some cases causing unused doses to expire.

Teaching during the pandemic was terrifying. When it was my turn for the vaccine, I actually cried in relief. Now I am fully vaccinated, and still, I am nervous around crowds. I look at the unmasked tourists in the park across from my home with resentment. Why do I still feel threatened? Could a year of living in fear have created a type of Covid PTSD?