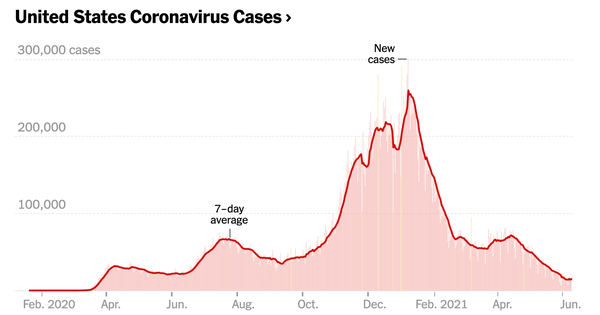 Moderna applied for U.S. authorization of its coronavirus vaccine for use in 12- to 17-year-olds.

The F.D.A. extended the shelf life of J.&J.’s vaccine by six weeks, giving states more time to use expiring supply.

A closer look at China’s vaccines

China is currently the world’s leading exporter of coronavirus vaccines. It has delivered more than 250 million doses to more than 90 countries around the world, with many of them in Latin America and the Asia-Pacific region.

The World Health Organization has given emergency authorization to two of China’s vaccines — one from the state-owned company Sinopharm, and the other from Sinovac, a private company based in Beijing.

But the Chinese vaccines have recently come under scrutiny after cases rose in places like Bahrain, Mongolia and Seychelles — countries where large percentages of the population had been inoculated with the Sinopharm vaccine. To learn more, I spoke to my colleague Sui-Lee Wee, who covers China.

What do we know about the effectiveness of these two vaccines?

The Sinopharm vaccine has a 78 percent efficacy rate. The Sinovac vaccine has a range of 50 percent to 78 percent, depending on which country the clinical trial was done in. The issue with these two vaccines is that the W.H.O. said that they don’t have enough data on how the vaccines have performed in people above 60 years old. The Phase 3 clinical trial for Sinopharm was done in the United Arab Emirates, and 90 percent of the people they recruited were middle-aged men. And it’s very similar for Sinovac.

So what is China saying about these vaccines and their effectiveness?

They keep trumpeting the fact that these vaccines still prevent severe illness and death, which by all accounts, they do. Even in the Seychelles, all the people I interviewed who had Covid after getting the Sinopharm vaccine said that they have had mild symptoms and they were able to recover at home. But experts have told me that because the Chinese vaccines lag behind other Western vaccines like Pfizer and Moderna, in terms of efficacy, that really means that countries that choose to use them will take longer to reach herd immunity.

A couple of experts have done some modeling that shows that basically, if you use a vaccine with 90 percent efficacy against infection, that means you can reach herd immunity if 66 percent of the population is vaccinated. But if you use a lower efficacy vaccine, you need many more people to be vaccinated. So, for example, if the vaccine is 60 percent effective, then the portion of the population that needs to be vaccinated is 100 percent. That’s the real issue with the Chinese vaccines. They’re very useful for countries in preventing severe illness and death, but if you want to reopen the economy quickly, I think they would need to reassess whether using a Chinese vaccine is the best bet for them.

What do developing countries that are receiving the Chinese vaccines think about them?

I think at this point, a lot of them don’t have a choice. At the end of the day, China is a country that says it can make five billion doses a year. And with the Pfizer and Moderna vaccines, the developed nations are still ahead in the queue. [Read our next item about Biden’s announcement to donate 500 million Pfizer doses to 100 countries.]

What do we know about how well they protect against the variants?

Not much, actually. The SinoVac vaccine is 50 percent against the Gamma variant in Brazil. Sinopharm said that a small scale study showed that it could protect against the Beta variant, that first appeared in South Africa, but there was some reduction in the protection. But that was such a small lab study. The experts I’ve spoken to basically think that the weaker vaccines wouldn’t protect as well against the variants as the Pfizer and Moderna vaccines. But we just don’t know yet.

What has the vaccine rollout looked like inside China?

At first it was very slow. In China, like in many Asian countries, a lot of people didn’t feel the need to get vaccines that quickly because the outbreak was largely stamped out. Also, China has a history of vaccine quality scandals, so people were quite skeptical.

But in the last month, it has sped up so much. It’s like mind-bogglingly fast now. Very recently China rolled out about 20 million vaccines in just a day, and they completed 100 million doses in five days.

So what does this summer look like in China?

Life is back to normal and it has been in China for a while. But recently, Chinese officials have come out to say that even with the very rapid vaccination rates, they don’t have a road map for reopening the country’s borders. They are still going to be super cautious. They said that the earliest that they would open their borders would be the first half of 2022, mostly because they feel that they are still not really confident in terms of how their vaccines would prevent transmission in the real world.

The other issue is that the Chinese still have this mentality that they need to reach zero Covid. So, for example, in this most recent outbreak in Guangdong, they went back to the same playbook of lockdowns and mass testing in neighborhoods. They tested millions of people, even vaccinated individuals, which raises the question, what’s the point of getting vaccinated if you’re still resorting to the same measures?

Biden pledges doses for the world

President Biden, under pressure to address the global coronavirus vaccine shortage, announced that the U.S. will buy 500 million Pfizer vaccine doses and donate them to about 100 low- and middle-income countries over the next year.

“This is about our responsibility, our humanitarian obligation, to save as many lives as we can,” Mr. Biden said in a speech in England, ahead of the meeting of the Group of 7 wealthy democracies.

While wealthy nations have quickly inoculated large swaths of their populations, much of the world is making little progress. That’s raising fears that more deadly waves might overwhelm fragile health care systems and spawn new variants.

According to the W.H.O., only seven African nations are likely to meet its goal of vaccinating at least 10 percent of residents against the coronavirus by September. Only about 2 percent of Africans are currently vaccinated.

Eight of the 10 countries with the highest rate of Covid deaths per capita are in Latin America and the Caribbean.

Afghanistan is also facing its severest period of the pandemic. The country received 700,000 doses of the Sinopharm vaccine from China today.

Abu Dhabi in the United Arab Emirates will restrict access to public places to those who have been vaccinated or who have recently tested negative, Reuters reported.

Singapore said it would expand its vaccination campaign to people ages 12 and older beginning on Friday.

See how the vaccine rollout is going in your county and state.

Deaths from Covid-19 have dropped by 90 percent in the U.S. since their peak in January, but the virus continues to kill hundreds every day.

An outbreak at a Hawaii jail has infected more than one-third of its 340 inmates.

Two passengers on a Mediterranean cruise tested positive for the virus this week, the Washington Post reports.

Goldman Sachs is requiring its U.S. employees to report their vaccination status.