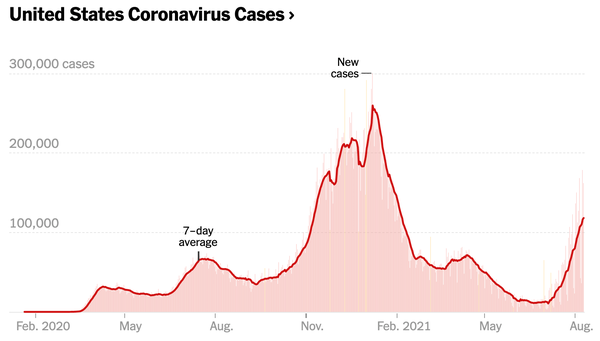 The O.E.C.D. said global economic recovery from the pandemic may be slowing.

The W.H.O. is testing three more drugs in a broad search for Covid treatments.

What to know about breakthrough infections

Half a year into the U.S. vaccination campaign, and many Americans seem to know of someone who has had a breakthrough infection. While these infections have been rare, there is some evidence that they are becoming more common with the Delta variant.

Our knowledge about these types of infections is changing rapidly, so my colleague Apoorva Mandavilli broke down what you need to know.

Breakthrough infections are likely to be uncommon, but data is lacking.

Most estimates on breakthrough infections predate the Delta variant. Even when more recent data becomes available, however, it is still likely to show that a vast majority of hospitalizations and deaths from Covid-19 occur in unvaccinated people. A New York Times analysis of data from 40 states shows that fully immunized people accounted for fewer than 5 percent of hospitalizations and fewer than 6 percent of deaths from Covid-19.

The vaccines were designed to prevent severe illness, not infection.

The vaccines were intended to prevent hospitalization and death by producing antibodies in the blood that prevent the coronavirus from taking root in the lungs and other organs.

But in order to prevent infection, the vaccines would have to produce more antibodies where the infection begins — in nasal secretions and saliva in the nose and the throat. The vaccines do produce antibodies there, probably enough to prevent infection with previous variants, but the Delta variant seems to replicate perhaps 1,000 times as much as its predecessors. That seems to defeat the immune defenses in the nose and the throat.

To prevent both severe illness and infections, the vaccines would need to produce long-lasting antibodies in the blood and in the nose, a tall order.

The real danger from breakthrough infections is to the unvaccinated.

The virus should not last very long in those instances. But infected people can transmit the virus to others very early, even before they feel symptoms.

In rare cases, breakthrough infections may lead to persistent symptoms.

“Long Covid” is a poorly understood set of symptoms that can plague people for months after an active infection has ended. Experts say that long Covid after a breakthrough infection is likely to be rare because those infections are uncommon to begin with and shorter in duration.

If you get through a breakthrough infection relatively unscathed, you are likely to walk away with more robust protection against variants. Researchers say the infection essentially acts as a booster shot, strengthening your immune system’s ability to recognize and fight the virus.

The view from the U.K.

Nearly a month ago, “Freedom Day” arrived in England. Despite weeks of rising coronavirus cases, and a warning from the health secretary that cases could exceed 100,000 a day, the country lifted all but a few pandemic restrictions.

In the week since, cases have ticked up slightly — the seven-day average yesterday was over 27,000, arresting the unexpected decline. What’s going on? We asked Benjamin Muller, a U.K. correspondent for The Times.

What’s the current wisdom on the drop in cases?

The European soccer championship in June and July, in which England went to the final, seems to have played a role in driving up cases, judging from the pattern of when cases spiked and from who was getting infected in larger numbers: men. So the end of the tournament probably helped, as did the summer school holiday. A spell of warm weather may also have encouraged people to get together outside.

And then there were the hard-won gains of more and more immunity from vaccinations and previous infections. Many younger people, especially, had still been waiting for their second shots as cases exploded. Now more than 90 percent of adults in England and Wales are testing positive for coronavirus antibodies, either from having been sick or from being vaccinated.

The U.K. has also been contact tracing more aggressively than the U.S., potentially containing some outbreaks. A contact tracing app had been asking so many people to isolate that the newspapers described it as a pingdemic.

Is there concern that the drop has stopped or slowed?

It looks as if cases have at least plateaued. Cases have started inching up in the last few days. We’re a few weeks out now from so-called Freedom Day, which is when nightclubs opened and other restrictions were lifted. It could also have something to do with a period of worse weather that may have driven people back indoors.

What can hospitalization data tell us?

Hospitalizations are still falling, and deaths remain at low levels. That shows how effective these vaccines are. It’s also a testament to Britain’s extraordinary success in vaccinating its oldest residents. In England, around 95 percent of everyone above 70 years old has been vaccinated. That’s stronger than coverage among older people in the U.S.

What are the lessons for the U.S.?

Britain’s low death toll is a lesson about the benefits of extraordinarily high vaccination coverage in older and more vulnerable people. Britain didn’t wait for those people to show up at vaccine sites. It mobilized an army of primary care doctors to make sure they all came in for their shots — and almost all of them did. Britain also tested its way extremely aggressively through this crisis. To this day, anyone can order packages of free, at-home rapid tests. They’ve become part of people’s routines and helped them catch cases before any symptoms appeared.

Thousands in Germany got extra shots after a nurse was suspected of tampering with the vaccine.

In the U.S., McDonald’s, Capital One and Amtrak will require some employees to be vaccinated.

The C.D.C. estimated that one million people in the U.S. have received an unauthorized booster shot, ABC reports.

See how the vaccine rollout is going in your county and state.

The W.H.O. director general suggested that the world could record 100 million more cases by next year if things don’t change, The Washington Post reports.

As virus testing demand surges in the U.S., counties are reopening testing sites.

Bangladesh ended a strict lockdown even as cases rose.

Some people don’t want to leave their pandemic pods. (And maybe they won’t have to.)

I lost a beloved uncle in January, the day before the inauguration, at only age 54. Eight months later I find the grief incredibly hard to shake; it feels as if you lost someone you love in a car crash, and then you have to witness hundreds of car crashes every day. I don’t really know how to live my life now while vaccinated. The idea of getting sick, even if it’s a mild case, remains so frightening, and the idea of going “back to normal” feels wrong when so many have lost so much. This newsletter has given me a very necessary community and clarity at a time when scientific guidance and personal connection remains hard to find. I send my love and thanks to everyone who has written in.