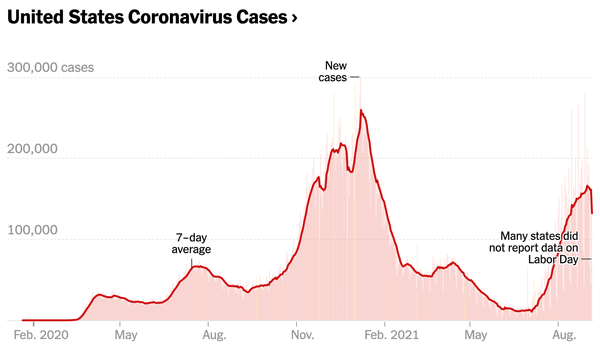 Activists called for U.N. climate talks in November to be postponed over pandemic concerns.

Unemployment benefits expired for millions of people, without objection from President Biden.

A Vietnamese court sentenced a man to five years in prison for breaking coronavirus rules.

In-person classes are returning to almost every university in the United States after more than a year of crisis and chaos — and at a particularly fraught moment. The highly contagious Delta variant is pushing cases skyward while the polarized debate around vaccines and masks has complicated campus discussions about virus safety.

The American College Health Association has recommended vaccination requirements for all on-campus higher education students for the fall semester. And the C.D.C. has recommended face coverings, regardless of vaccine status, for indoor public spaces in areas where the rate of infection is high.

But this is not how it has worked out on more than a few campuses, reports my colleague Anemona Hartocollis, who covers higher education.

Matthew Boedy, an associate professor of rhetoric and composition, sent out a raw emotional appeal to his students at the University of North Georgia just before classes began: He would teach class in the equivalent of full body armor — vaccinated and masked.

So he was stunned in late August when more than two-thirds of the first-year students in his writing class did not take the hint, and showed up unmasked. It was impossible to tell who was vaccinated and who was not, resulting in what he called “an emotional hellscape.”

At some campuses, particularly in Republican-led states with high rates of contagion — like the state systems in Georgia, Texas and Florida — vaccination is optional and mask wearing, while recommended, cannot be enforced. Professors are told they can tell students that they are “strongly encouraged” or “expected” to put on masks, but cannot force students to do so. And teachers cannot ask students who have Covid-like symptoms to leave the classroom.

University administrators are desperately trying to avoid the pitfalls of last year, when outbreaks at some campuses spread the virus into the surrounding communities. Some faculty members are calling for stricter safety precautions, which must be balanced against the fear of losing students (and revenue) who are fed up with online education.

Certainly, some professors are happy to go maskless, even as others have refused to teach or have quit — one in the middle of class — because of what they see as lax virus restrictions. Most, however, are soldiering on, and for some, the new year brings not a return to normal but a strong sense that things could go off the rails.

“It seems like a repeat,” said Michael Atzmon, an engineering professor at the University of Michigan. “On the one hand, we have the vaccine. On the other hand, we have Delta.”

Fauci on kids and Covid

Dr. Anthony Fauci will join Times journalists on Sept. 9 to answer vital questions for parents, educators and students, in a live event for Times subscribers.

The discussion will be moderated by Andrew Ross Sorkin, Times columnist and DealBook founder. He will be joined by Times journalists (who are parents themselves), including Apoorva Mandavilli, a science reporter, and Lisa Damour, a contributing writer and psychologist.

Check out the event page here.

More than 40 million cases of the virus have been recorded in the U.S. — more than the population of California and a fifth of the known global total.

The staggering number is a testament to the nation’s uneven efforts to confront the virus, and lately, the contagiousness of the Delta variant, which has ushered in a third wave of cases across the country.

As I.C.U.s fill across the country, governors are pleading with residents to get vaccinated.

“I wish everyone could have seen what I saw in the I.C.U. last night,” said Gov. Brad Little of Idaho, a Republican. The state’s Department of Health and Welfare said it had activated crisis standards of care, the emergency measures put in place when there are insufficient health care resources available, in the northern part of the state.

Gov. Jim Justice of West Virginia also called for more vaccinations, saying the virus had flooded many of his state’s hospitals and closed schools there. “We’ve got a really big time, big time situation in West Virginia, as it is all across this nation,” he said.

In Oregon, the director of the state’s Health Authority said on Saturday that only 50 of the state’s 638 I.C.U. beds were still available. Central Texas, which includes Austin, ran out of I.C.U. beds this weekend. And Alabama is short 181 I.C.U. beds, which means dozens of patients are being forced to wait in emergency rooms or other parts of hospitals.

Vaccination rates in Eastern and Central Europe are well below the E.U. average, exposing countries to new waves of infections.

Hong Kong relaxed some of the world’s strictest measures against the coronavirus, saying it would allow fully vaccinated residents to return from five additional countries.

Australians blasted their prime minister for taking a trip to see his family during lockdown.

In the Morning newsletter, David Leonhardt reported that the odds of the average vaccinated American contracting Covid are about one in 5,000 per day.

The Washington Post has an F.A.Q. on “Mu,” a successor to Delta that was recently designated a “variant of interest” by the W.H.O.

Emergency responders in the U.S. are dying in large numbers from Covid, but many are resisting vaccine mandates, PBS reports.

What’s the best present for kids turning 12 this year? A Covid vaccination.

This newsletter has been my lifeline pretty much since the beginning of the pandemic. It made me anxious, it made me cry, it started filling me with hope ever since the vaccines were developed, but mainly it kept and keeps giving me a great perspective. I got vaccinated as I could but my partner won’t, as he grew up in an anthroposophical house. It’s hard to accept this. For some time, especially with the Delta variant, I was very worried that he or his mother would get infected through me. I recently decided it’s not my responsibly to keep them safe. It took the weight off my shoulders, but I still worry. I just can’t get my head around people refusing their privilege to get vaccinated, and in this case it’s the person I love the most.