It’s Wednesday. The newsletter is taking Thursday and Friday off for Thanksgiving.

Weather: Expect a cloudy day, with the possibility of rain. Temperatures may reach the mid-50s. 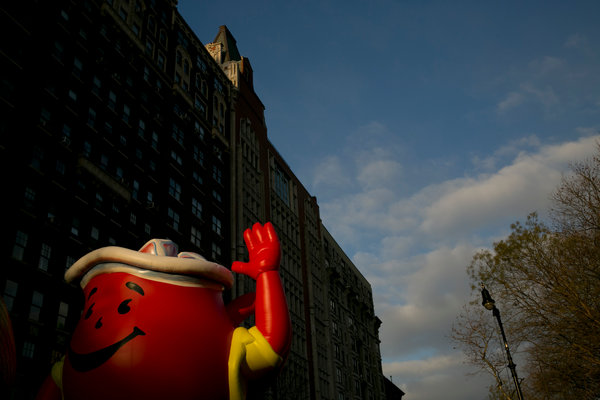 In 1997, a young woman from Manhattan was standing by 72nd Street, watching the Macy’s Thanksgiving Day Parade, when she was knocked unconscious.

Driven by heavy winds, a six-story Cat in the Hat balloon had slammed into a lamppost, scattering debris onto spectators.

Since then, New York City has prohibited giant balloons at the Macy’s parade when it gets too windy. Tomorrow may be such a day, officials say.

City regulations prohibit giant balloons in the parade if there are sustained winds above 23 miles per hour or if gusts exceed 34 m.p.h., my colleague Michael Gold reports.

The National Weather Service predicts that winds on Thursday could be that fierce. City officials and parade organizers will make a decision tomorrow morning.

Character balloons have been a feature of the parade since 1927. The only time it went without balloons was in 1971, because of weather conditions.

Smokey Bear is 51 feet high. Greg Heffley, from the “Diary of a Wimpy Kid” book series, is 62 feet in length. These and other balloons can require as many as 90 handlers each.

The parade also has several floats, marching bands from around the country and an array of clowns. My favorite: the city tourist clowns.

You can see the route on the Macy’s website.

The parade starts at West 77th Street and Central Park West at 9 a.m. It proceeds south to Columbus Circle.

Views can be limited, but are good along Central Park West if you arrive early. People have been known to arrive as early as 6 a.m.

The parade turns at Columbus Circle and goes east along West 59th Street for two blocks. Parade organizers note that there is “no public viewing” here. If you know someone with an apartment along this two-block stretch, you’re in luck.

From West 59th Street, the parade turns right onto Sixth Avenue and then heads south again to 34th Street. There are plenty of viewing spots along this 25-block journey.

After a cyclist in Manhattan was knocked down by a motorist opening his door, a police officer told the injured man he could expect to get a ticket for not riding in the bike lane. [Gothamist]

And finally: This taco truck has only four menu items. It also has a two-star review.

Every kind of taco consumed in New York can be found in Jackson Heights, Queens, according to Pete Wells, The Times’s restaurant critic.

The most talked-about tacos this year, he said, can usually be found on the corner of Roosevelt Avenue and 78th Street. I say usually because the tacos are not sold at a brick-and-mortar restaurant but from a white food truck called Birria-Landia.

Birria is a reference to the taco’s stewed meat — usually goat — filling. The truck is run by two brothers, José and Jesús Moreno. They were cooks at Italian restaurants before opening their food truck.

Among the offerings: “beef marinated and cooked in an adobo of hypnotic complexity,” writes Mr. Wells. “The meat, a blend of brisket, shank and top round, is rich and seems to grow softer as you eat it, like a square of chocolate.”

There is a tradition from Tijuana that says you should pause between bites of a birria taco for a sip of birria broth, known as consomé, Mr. Wells writes. A cup of that broth from this truck “is so flavorful and meat-laden it almost overshadows everything else.”

Metropolitan Diary: Getting a cab

I was late for an appointment on a hot summer evening. I grabbed my briefcase and headed up Madison Avenue.

After turning west at 53rd Street, I saw an older woman. She might have been around 95. She was holding onto a restaurant awning pole and asking whether someone could get her a taxi.

Traffic was at a standstill. I saw a car that had a window down. I offered the driver $20 to take the woman where she wanted to go. He said that he couldn’t.

I rushed back to Madison in search of a taxi. I saw one dropping someone off at the corner. I ran over and grabbed the rear door handle. Just then, another man put his hand over mine.

I turned to the driver.

“It’s not who sees the cab, but who puts his hand on the door handle, right?” I said.

The other man spoke.

“I don’t even want the cab for myself,” he said, explaining that it was for an older woman on 53rd Street.

We actually embraced, and then got into the cab together.