Labor leaders are throwing their weight behind Eric Adams in the New York City mayoral race.

Mr. Adams, the Brooklyn borough president, has won three major labor endorsements in the past two weeks, cementing his status as one of the top candidates in the crowded Democratic primary field.

As Mr. Adams rose, one of the first women to join the race dropped out, and the campaigns pushed to qualify for public matching funds. Andrew Yang, the former presidential candidate, announced over the weekend that he had raised an impressive fund-raising haul.

Mr. Adams is making the case that he is the candidate for working-class New Yorkers.

“We are building a blue-collar coalition that will deliver results for the New Yorkers who need them the most,” Mr. Adams said last week.

He has received support from three unions: Local 32BJ of the Service Employees International Union, which represents about 85,000 building workers in New York; the Hotel Trades Council, which has nearly 40,000 members in the hotel and gaming industry; and the District Council 37 Executive Board, the city’s largest public employees union, representing 150,000 members and 50,000 retirees.

The string of endorsements shows that some Democrats believe Mr. Adams has the best chance of beating Mr. Yang, who has been leading the field in recent polls.

While Mr. Adams has secured some of the city’s most coveted labor endorsements, Maya Wiley, a former counsel to Mayor Bill de Blasio, was recently endorsed by Local 1199 of the S.E.I.U. The powerful United Federation of Teachers has not yet picked a candidate.

Scott Stringer, the New York City comptroller, had been a contender for the 32BJ endorsement, according to the union president, Kyle Bragg.

“But this is more than just about friendships,” Mr. Bragg said, adding that the union had to consider who had “the strongest path to victory.” 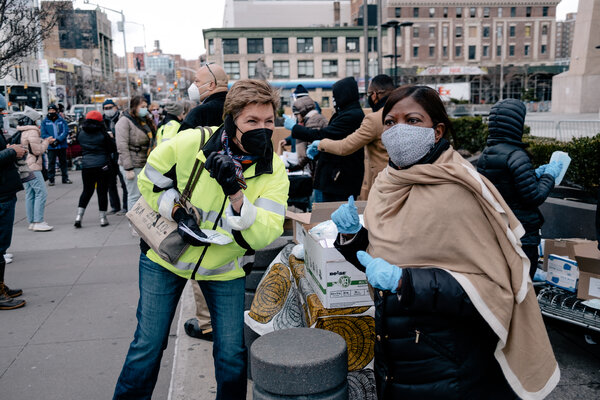 For Loree Sutton, the retired Army brigadier general who withdrew from the mayor’s race on Wednesday, the turning point came in late February when a state judge rejected a lawsuit seeking to limit in-person petition-gathering during the coronavirus pandemic.

Candidates must gather a certain number of signatures in person in order to get their names on the ballot.

“I just would not go out and do in-person petition-gathering under these circumstances,” Ms. Sutton said. It was, she said, a matter of “public health principle.”

Her mayoral bid was always a long shot. The former commissioner for the city’s Department of Veterans’ Services, she had little in the way of political experience or name recognition. She was running as a law-and-order moderate in a Democratic primary that tilts left.

Some advisers had encouraged her to run as a Republican, but doing so would have felt inauthentic, she said. Centrism, she argues, remains an essential part of the Democratic Party.

But early on there were signs that her brand of moderation would be unwelcome.

She was excluded from an early Democratic forum because she had argued that protesters should be required to obtain city permits.

She campaigned on the importance of public safety and rejected calls to defund the police, a posture that seemed out of step with many of her competitors.

“Some of the worst atrocities in human history have taken place under the misconception that somehow we can create a utopian society,” she said.

She has yet to decide whom she will endorse, but she was complimentary of Kathryn Garcia, the former Sanitation Department commissioner, who is running as a pragmatist. And she has not ruled out running for office again someday.

“It’s the journey of a lifetime,” she said.

At a mayoral forum on housing on Thursday, a tenant leader at a city public-housing complex, Damaris Reyes, challenged the candidates: “I want to know if you will commit to preservation of public housing, and how you will repair trust and empower resident decision making.”

The 175,000 apartments in the city’s public housing system have been sliding into disrepair for decades, with the price tag for replacing leaky roofs, old heating systems, broken elevators and other problems now estimated at $30 billion to $40 billion.

But the city’s proposal to fund the repairs by using a program that would hand over management of tens of thousands of apartments to private developers has been greeted with skepticism. Many New York City Housing Authority residents fear their apartments would be privatized, leading to rent increases and evictions.

Ms. Garcia, who served as interim commissioner of NYCHA in 2019, said the blueprint would let the city leverage federal money that was already available. She said she could win over skeptics by taking them on tours of the Ocean Bay complex in Queens, where a private landlord has been making repairs. “You know who the best spokespeople are?” she asked. “The people who have actually had their apartments renovated.”

Shaun Donovan, who ran the city’s department of housing preservation under Mayor Michael R. Bloomberg and who served as President Barack Obama’s commissioner of housing and urban development, said that partnering with the federal government provided “the only pathway where we can truly get to scale.”

Mr. Donovan’s plan also calls for the city to kick in $2 billion a year and includes job-training programs for NYCHA residents who would be hired to do much of the work, he said.

Mr. Yang has promoted his own $48 billion — and entirely federally funded — “green new deal” for NYCHA. To combat NYCHA residents’ “massive trust deficit,” the city should “make NYCHA residents the majority of the board of NYCHA itself,” he has said.

Five candidates now say they have qualified for public matching funds, and a sixth may qualify soon.

At the latest donation deadline last week, Mr. Yang proved that he is a strong fund-raiser. He reported that he had met the matching-funds threshold by raising more than $2.1 million from 15,600 individual donors in the 57 days that he has been in the race. Mr. Yang’s campaign said it expects to have raised $6.5 million once public dollars are received.

“With 100 days left, we have built the foundation and energy to win,” Mr. Yang’s campaign managers said in a statement.

The fund-raising leaders have also continued to rake in public dollars. Mr. Adams and Mr. Stringer, the only two candidates who have received matching funds so far, reported having raised a total of more than $9 million each once matching funds were factored in.

Ms. Wiley, who announced that she had met the threshold last period before an audit from the Campaign Finance Board determined that she had not, declined to release fund-raising figures. Her campaign was waiting on a ruling Monday from the board.

Raymond J. McGuire, a former banking executive who shook up the race when he raised $5 million in three months, is not participating in the public funds program. His campaign said he had raised another $2.6 million since the last filing period.

According to campaign finance rules, if a nonparticipating candidate raises or spends more than half of the $7.3 million spending limit, the spending cap could be increased by 50 percent. Matthew Sollars, a spokesman for the board, said a determination on an increased spending cap would be made late next month.

A candidate looks for the Latino vote.

Little known fact about Scott Stringer, who is white and Jewish: His stepfather immigrated from Puerto Rico as a toddler, his stepfamily is Latino and, partly on that basis, he hopes to win the Latino vote in the mayoral election.

“Buenos días a todos,” Mr. Stringer said on Sunday in Upper Manhattan, as he formally kicked off his “Latino agenda,” not far from the Washington Heights neighborhood where he grew up. His stepfamily joined him and lauded his record, character and intelligence. “Scott is simpático,” said Carlos Cuevas, Mr. Stringer’s stepbrother, a lawyer.

Mr. Stringer’s efforts at highlighting his family to identify with a particular constituency is not a novel one. Mr. de Blasio relied heavily on his African-American wife and biracial children in his 2013 run for mayor. At a forum about Jewish issues, Ms. Wiley, whose father was African-American and mother was white, made a point of noting that her partner is Jewish and the son of Holocaust survivors.

The Latino vote — which is far from monolithic — is coveted, representing about 20 percent of the New York City electorate.

The mayor’s race has several candidates of Latino descent: Dianne Morales, the former executive of a nonprofit, and Carlos Menchaca, a councilman from Brooklyn, both of whom are Democrats; and Fernando Mateo, a Republican. None responded to requests for comment on Mr. Stringer’s Latino voter push.

The same day Mr. Stringer was rolling out his agenda, his competitor Mr. Yang made his pitch to Spanish language viewers of Telemundo.