ATLANTA — At a news conference in which she fought to hold back tears, Mayor Keisha Lance Bottoms of Atlanta said on Friday that there was no single reason for her abrupt and dramatic decision not to run for a second term.

She did, however, rattle off a list of grinding municipal crises she has faced since taking office in 2018: a crippling cyberattack at City Hall, a federal corruption investigation that started under her predecessor, the coronavirus pandemic, social justice protests, and the challenge of governing under former President Donald J. Trump, whom she referred to as “a madman in the White House.”

But the most serious political threat that emerged for Ms. Bottoms in recent months was a phenomenon she had previously described as the “Covid crime wave.” Like many other American cities, Atlanta is struggling with a spike in violent crime, including a 58 percent increase in homicides last year — the likely result, researchers say, of the pandemic’s strain on at-risk populations, as well as institutions like courts and police departments.

The mayor’s inability to get a handle on crime has become the central theme for two challengers — Felicia Moore, the City Council president, and Sharon Gay, a lawyer — who thought they were going to take her on in the November election. “Atlanta has a mayor that is more interested in things that happen outside Atlanta,” Ms. Moore said in a recent statement, referring to Ms. Bottoms’s emerging national stature, including talk that she was rumored to be a possible vice-presidential candidate. “We need a mayor who knows the No. 1 job of any mayor is to keep our city safe.”

Ms. Bottoms on Friday pushed back against the idea that she was worried about re-election, saying that she was popular enough to have won without a runoff. But others were not so sure. And Ms. Bottoms’s predicament could become common for city leaders around the United States as crime concerns take a political toll. 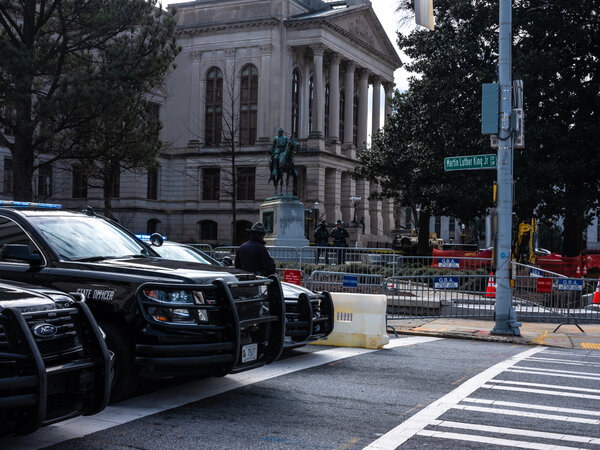 The dynamic is already rippling through other cities. In Philadelphia, a city suffering from a spike in homicides and gun crime, Larry Krasner, the progressive district attorney, is facing a serious challenge from a candidate, Carlos Vega, who says Mr. Krasner “has not delivered on safety.”

In San Francisco, where burglaries were up 46 percent in 2020 and car thefts up 22 percent, according to The San Francisco Chronicle, a similarly progressive prosecutor, Chesa Boudin, is facing a recall effort from critics focused on crime.

In St. Louis, where homicides were up 35 percent last year, former Mayor Lyda Krewson decided not to run for a second term after the wearying trials of 2020. The city’s new mayor, Tishaura Jones, is, like Ms. Bottoms, an outspoken advocate for criminal justice reform who now faces the challenge of radically reimagining policing and incarceration while bringing her city’s crime numbers down.

In Atlanta, crime has continued raging into 2021. In the first 18 weeks of the year, police statistics show homicides up 57 percent, rapes up 55 percent, aggravated assaults up 36 percent and auto thefts up 31 percent compared with the same period last year.

The state’s speaker of the House, David Ralston, a Republican, plans to hold hearings this summer to consider putting state troopers on Atlanta’s streets. Weapons detectors were installed at the entrance of the Lenox Square mall in the upscale Buckhead neighborhood, making shopping feel like a trip to a courthouse. Some Buckhead residents are so fed up they have formed a group to explore whether to secede from the city — a move that would devastate Atlanta’s tax base.

A report released in February by the Council on Criminal Justice gave a snapshot of the crime that afflicted American cities in 2020, with many of them suffering a sharp rise in homicides, aggravated assault and gun assaults.

But the researchers also noted that the numbers were “well below historical highs” before crime began plummeting nationwide in the 1990s. And for now, the fear of crime does not appear to have the same political juice that it had in previous decades, when scare campaigns could help decide presidential contests and get-tough rhetoric was a winning tactic in big-city elections.

Indeed, the widespread demand for criminal justice reform in liberal-leaning cities like Atlanta appears to have tempered the language and platforms of candidates promising to solve the crime problem.

Both Ms. Gay and Ms. Moore, for example, argue that the next mayor of Atlanta needs to be smarter about crime, not necessarily tougher. Instead of criticizing Ms. Bottoms for embracing criminal justice reform, Ms. Moore — who, like Ms. Bottoms, is African-American — essentially agrees that reform and safety are not either-or propositions.

“I believe wholeheartedly we can do both,” she said.

However, the political problem Ms. Bottoms would have faced demonstrates the enduring peril of being perceived as unable to meet the challenge of rising crime. Critics have blasted her for allowing more than 400 officer vacancies to go unfilled in the Atlanta Police Department, which is supposed to be 2,046 officers strong.

Ms. Moore has criticized her for failing to hold a national search for a replacement for former Chief Erika Shields, who stepped down in June in the aftermath of the fatal police shooting of Rayshard Brooks. (This week, Ms. Bottoms gave the interim chief, Rodney Bryant, the permanent role.)

Others have lashed into the Bottoms administration for botching the firing of Garrett Rolfe, the white officer who killed Mr. Brooks, a Black man. The administration fired Officer Rolfe the day after the shooting, but this week, the city’s Civil Service Board reinstated him on the grounds that his due process rights had been violated.

Such missteps went a long way to explaining why Ms. Bottoms had made herself politically vulnerable, said Clark D. Cunningham, a law professor at Georgia State University.

Over the years, a number of people who worked with Ms. Bottoms in City Hall said she did not always seem fully engaged in the day-to-day chore of governance. At her Friday news conference, Ms. Bottoms said she had been thinking about not running for re-election as early as her first year in office. “I can’t describe it,” she said of that feeling, “but I wasn’t sure that I would run again.”

At the same time, Ms. Bottoms has displayed a passion for enacting criminal justice reform, a topic she couches in personal terms. On Friday, she made reference, as she often has, to the painful story of her father, the R&B singer Major Lance, who was convicted of selling cocaine when she was a child.

The experience inspired her to limit the public disclosure of small-scale marijuana arrest records and eliminate cash bond requirements at the city jail. She hopes to transform the jail itself into a social services hub she calls a “center for equity.”

Her Police Department, meanwhile, is engaged in a review of training and policy, with the goal of making the department more community-oriented.

Though revamping the department may pay off in the long run, Dean Dabney, a professor of criminology at Georgia State University, said it could increase crime in the short run.

“If you switch from tactical policing to community policing, it’s going to take time to reallocate those resources and get those resources doing things the new way,” he said. “During that adjustment period the criminals are going to have the upper hand.”

In the weeks before she declared that she would not run again, Ms. Bottoms seemed aware of the way that crime had taken center stage. She has promised to hire 250 police officers in the near future, crack down on nuisance properties, increase enforcement against gangs, and expand the city security camera network.

In her news conference, Ms. Bottoms said she would focus, in her remaining months in office, on keeping the city safe. “I’m doing that not because I’m a mayor, but because I’m a mother in this city,” she said. “I want this city to be safe for my family, in the same way that I want it to be safe for everybody else who’s standing in this room.”