Before classes had even started at the University of Missouri this August, Eli Hoff, the managing editor of the student newspaper, got a hot tip: A fraternity member had tested positive for the coronavirus.

He reported the news for his campus publication, The Maneater. Then in September, he and his colleagues broke a story about administrators instructing staff members to “publicly support” all their decisions about the virus, whether they agreed or not. And after the university said no students had been hospitalized with Covid-19, Mr. Hoff was able to confirm two admissions, contradicting the official story.

Not everyone has been happy with his dogged reporting — Mr. Hoff, 19, said a fraternity leader shared his phone number with members and told them to “have fun” with it — but with declining coverage of the campus from local news outlets, “it’s up to us to report on it,” he said.

As American colleges have become a major source of outbreaks, with at least 214,000 cases linked to campuses, student journalists have found themselves playing a vital role in the pandemic, reporting stories of national importance and holding their administrators and fellow students accountable.

The Michigan Daily exposed a cluster tied to fraternities and sororities just days before the county imposed a stay-at-home order on University of Michigan undergraduates. The State Press broke news that Arizona State students who were supposed to be in isolation had left their dorms. And at Indiana University, The Indiana Daily Student spoke to Uber drivers who picked up students from Greek houses under quarantine orders. 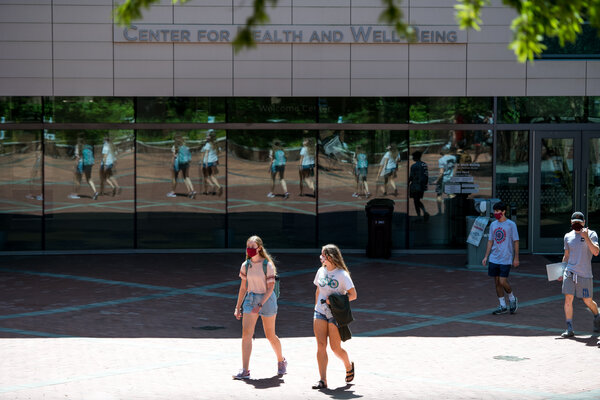 “We all saw this coming,” wrote the editorial board of The Daily Tar Heel at the University of North Carolina at Chapel Hill, excoriating administrators for poor planning just a day before a growing outbreak forced the school to abandon in-person instruction.

Even before the coronavirus shut down campuses this spring, disrupting student life to a degree not seen since the Vietnam War, college publications had found themselves playing an increasingly vital part in their communities. The crisis in local journalism, which has forced more than 1,800 U.S. newspapers to close or merge since 2004, has left some of them as the sole remaining daily paper in college towns.

“Student journalists are playing an incredibly important role in this moment, and they’re doing it in an environment where local news media is drying up or disappearing,” said Hadar Harris, the executive director of the Student Press Law Center.

But college journalists can also face special obstacles, including from people with power over their educations. Last month, the president of Haskell Indian Nations University in Lawrence, Kan., was criticized by press groups for threatening disciplinary action against the editor in chief of the student paper.

“A lot of times, they will not be forthcoming in the information they provide to student journalists because they don’t want to make the school look bad,” said Ms. Harris, who offers resources to students trying to counter objections from administrators to their reporting. “In the era of Covid, it’s that much more of a lockdown of information.”

After their splashy editorial, student journalists at The Daily Tar Heel continued to push the administration. In response to a public records request, Elizabeth Moore, a reporter at the paper, received more than 3,000 pages of emails and text messages showing internal faculty dissent over reopening plans and advance warning from epidemiologists about possible outbreaks.

“You could see a direct line from the decisions they made in May that they decided to stick with, even though the situation kept evolving over the summer,” said Ms. Moore, 20. “That ended up causing some harm. A lot of people got sick, and people got displaced from dorms.”

Kyle Wood, a journalism student at the University of Florida, works in one of the college communities where the campus publication, The Alligator, is now arguably better staffed than the local paper. The Gainesville Sun has suffered years of contraction and budget cuts. Only a handful of reporters remain there full time.

“We’re filling holes where we see them,” said Mr. Wood, 22, who oversees a staff of about 60 journalists as The Alligator’s editor in chief. He has added new beats, including coverage of K-12 education and small businesses, to report on the pandemic’s effect on the city.

The first story from the reporter on the paper’s new health beat followed a tip about lax safety procedures in the university hospital’s emergency room. Mr. Wood is also working with reporters to maintain and update a map of cases on campus, informing both the campus and the city about outbreaks.

One coverage area where campus publications have traditionally excelled is sports, especially at large schools where college athletics are a regional industry. During the pandemic, the fate of sports on campus has been a major story, with clusters of football players (and their highly paid coaches) testing positive, and some universities cutting programs amid economic hardship.

At the University of Virginia, The Cavalier Daily shed light on a testing disparity between athletes — some of whom received tests three times a week — and other students who told the paper they had to exaggerate symptoms just to get tested.

At Villanova, the big story in the sports pages is the basketball team, which currently fields several strong seniors with a shot of making it to the N.B.A. Disruptions to the schedule could affect whether professional scouts can watch them play.

“If they lose that, their professional career is in jeopardy,” said Emily Cox, 21, a co-editor in chief at The Villanovan. “We’re tracking that.”

For some students, covering the pandemic has taken a toll. The Daily Gamecock at the University of South Carolina went dark for a week last month, saying its journalists were suffering from Covid-19 burnout. “In the past year, I could count on one hand the number of times I didn’t have a tight feeling in my chest,” wrote Erin Slowey, the paper’s editor in chief.

Students say it is difficult to play the role of watchdog even as they try to attend classes and cope with the pandemic themselves.

“You’re not parachuting in,” said Oyin Adedoyin, 21, the editor in chief of The Spokesman, the student newspaper at Morgan State University, Maryland’s largest historically Black university. “You literally live it,” she added.

The Spokesman has partnered with the Poynter Institute to report on health disparities in Baltimore’s Black community. “Black people, specifically, have been affected by the coronavirus,” Ms. Adedoyin said, “whether it’s unemployment, whether it’s students who just really don’t learn as well online, whether it’s family situations where you just can’t be home.”

College journalists are also facing disruptions in the media industry, just like those working at professional news outlets, and questions about whether they will graduate to jobs in the business. Some are experimenting with new ways of delivering information.

Arielle Gordon, 21, a senior at Colorado College, helped start a newsletter to report about the pandemic on campus and in the surrounding community of Colorado Springs. After a spike of cases in late August, the school’s test positivity rate has stayed below 1 percent, according to its coronavirus dashboard.

“Our audience is definitely expanding as coronavirus cases pop up,” Ms. Gordon said, adding, “People in the broader community have more questions and have started paying more attention to the stuff that we’re reporting.”

Along with her co-writers, Ms. Gordon has published interviews with campus administrators, offered scientific forecasts about the state of public health and infection in the community, and documented the exhaustion of life in quarantine dorms.

“People want to know what went wrong,” she said. “We’ve been trying to find out as much we can.”