MEXICO CITY — In the face of widening American financial restrictions on Cuba, more than 400 Western Union offices on the island will close, Cuban authorities said, a move that could severely restrict the flow of remittances from abroad and worsen a profound economic crisis that has led to widespread food shortages on the island.

Fincimex, a Cuban military-controlled entity that serves as Western Union’s agent on the island, announced the planned closures on Tuesday after the Trump administration took steps to prohibit the transfer of money through firms associated with the country’s military.

Fincimex processes much of the remittance money, billions of dollars a year that make up a significant part of the Cuban economy.

Western Union said it was “exploring ways to comply with the new rules,” which take effect in late November, adding that services between the United States and Cuba would continue to operate for now.

Cuba’s Communist government could still designate other institutions with countrywide coverage, like banks, to channel remittances in compliance with the new rules, analysts said.

U.S. Secretary of State Mike Pompeo said the new restrictions were imposed because the Cuban military has taken a cut of the remittances and “uses those funds to oppress the Cuban people and to fund Cuba’s interference in Venezuela.”

Fincimex said the new regulations were politically motivated and would harm the Cuban people. “Doing so in the midst of a pandemic emphasizes cynicism, contempt for the Cuban people and the opportunism of the American government,” the firm said in a statement.

The restrictions were the latest effort by the Trump administration in its aggressive campaign to roll back the American détente with Cuba and the policy of engagement begun by President Barack Obama.

But the timing, coming days before the American presidential election, is no coincidence, analysts said.

The battleground state of Florida, home to a powerful Cuban-American voting bloc that has historically tilted conservative, was part of the Trump administration’s equation, they said.

“This is simply electoral year politics,” said Ted A. Henken, associate professor of sociology at Baruch College in New York. “There is a strong likelihood that the Cuban vote can play a role in keeping Florida in the Republican column this year.” 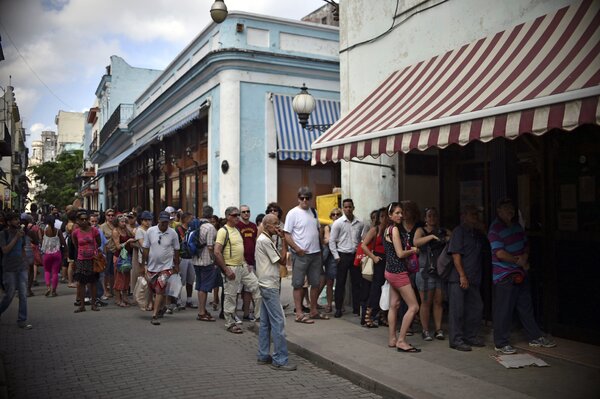 Mr. Henken said this week’s moves could have a disastrous effect on Cuba’s population.

“If the Cuban government refuses to allow some other entity, like a bank, to do this, it could be a devastating blow to everyone who lives in part or in whole on remittances, which is probably 60 percent of the population,” he said. “This is putting a noose on the Cuban economy and accepting that it’s also around the necks of everyday Cubans.”

Emilio Morales, president of the Miami-based Havana Consulting Group, said the Trump administration’s restrictions have put the onus on the Cuban government at a time when it was already struggling to shore up an economy crippled by sanctions and the coronavirus pandemic. The virus has brought tourism to a grinding halt and slowed remittances.

Billions of dollars in remittances were transferred to Cuba last year, Mr. Morales said, with much of the flow passing through entities controlled by the Cuban military and the rest reaching Cuba by other means such as relatives arriving by plane and people hired to carry in currency.

The arrangement has been lucrative for the Cuban military, Mr. Morales said, making it extremely reluctant to give up control. But the latest restrictions by the Trump administration, coinciding with such a severe economic downturn on the island, may leave the government with no option but to pry the remittances trade out of the generals’ hands.

“If the military does not give up the remittance business to other state institutions, they will run out of oxygen, it’s that simple,” Mr. Morales said.

“Obama tried to empower the Cuban people by opening remittances and large-scale travel,” Mr. Morales continued. “However, his administration unfortunately did not do the due diligence on how the remittance business was channeled to the island and inadvertently put billions of dollars a year into the hands of the Cuban military leadership that in reality never ended up in the hands of its true owners, the people of Cuba.”