Gov. Andrew M. Cuomo on Tuesday warned that New York State was facing an enormous $15 billion deficit as he unveiled a 2022 budget proposal laden with urgency and uncertainty caused by the coronavirus pandemic.

The governor pleaded with leaders in Washington to deliver $15 billion in emergency relief, but the precariousness of the situation led Mr. Cuomo to lay out two different budget possibilities: one assuming a federal aid package of $6 billion, and another with the full $15 billion.

There are other question marks, primarily a lack of clarity about how much money the state would have on hand because of diminished tax revenues.

In crafting a budget for the next fiscal year, which begins April 1, state officials face similar challenges as last year, when the pandemic devastated the economy and upended one of the nation’s largest budgets.

But the political climate in Washington is certainly different: Senator Chuck Schumer, who will take over as majority leader in Washington this week, has promised “better days ahead out of Washington for New York,” though he has stopped short of promising a complete bailout.

Still, his influence is already being felt: Last week, Mr. Schumer announced that the city and state would receive $2 billion in emergency funding related to expenses incurred as part of the coronavirus response. 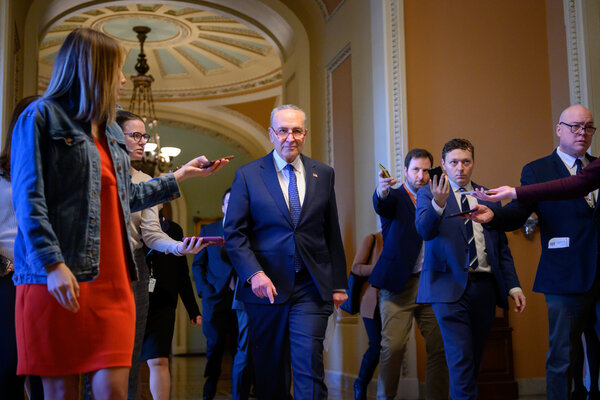 While Mr. Cuomo has criticized the lack of direct financial aid to the state, the stimulus deal passed in December did include a variety of big-dollar payments for transportation and education, as well as vaccination efforts and rent relief.

Mr. Cuomo’s assertion of a $15 billion shortfall has also been questioned by some conservative economists, and the bleak outlook was seemingly softened by news last week from the state comptroller that December tax receipts had come in $1.4 billion above projections.

The incoming Biden administration is promising $350 billion in direct aid to states and local municipalities, as part of a $1.9 trillion Covid response plan. Even so, Mr. Cuomo has maintained that without a substantial infusion of cash from Washington, the state would need to resort to a mix of tax increases, spending cuts and borrowing.

“We don’t know what level of aid we will get,” Mr. Cuomo said on Tuesday, adding, “New Yorkers deserve and demand fairness.”

The governor went as far as threatening to pursue litigation if Congress did not grant his request for $15 billion, although it’s unclear whom the state would sue and on what grounds.

If the federal government provided a $6 billion aid package, which the governor called the “worst-case” scenario, Mr. Cuomo said the state would be unable to fill its budget gap, resulting in cuts of about $2 billion in school funding, $600 million in Medicaid funding and $900 million in across-the-board reductions.

The governor has proposed some popular revenue-raising measures, including the legalization of recreational marijuana and mobile sports betting, but the projected tax dollars from those proposals could take years to materialize and would not dig the state out of its gargantuan budget hole.

Mr. Cuomo said on Tuesday that legalizing marijuana could raise about $350 million a year once the program is implemented. He proposed steering about $100 million annually to a “social equity fund.” Legalization efforts have fallen apart since 2019 because of disagreements between Mr. Cuomo and the Legislature over how to allocate tax proceeds from pot sales, with many lawmakers calling for the money to be reinvested in communities disproportionately affected by the unequal enforcement of drug laws.

The state’s budgetary woes have bolstered calls from progressive coalitions and left-wing lawmakers who support increasing taxes on the rich and passing an array of new levies to tax their wealth. But Mr. Cuomo, a third-term moderate Democrat, argued on Tuesday that raising the income tax on the state’s top earners would not produce enough money to offset budget cuts if Washington does not give the state sufficient aid.

In the coming weeks, the Legislature, which is controlled by Democrats, is expected to review and present its own budget proposal. The governor holds enormous sway over the budget process, which typically includes negotiations over a raft of nonfiscal measures unrelated to the budget. The governor’s budget needs to be passed by April 1.

While federal aid could help stabilize New York’s budget gap in the short-term, state officials are bracing for profound, multiyear tax losses: Mr. Cuomo projected a revenue shortfall of $39 billion over the next four years.