After one of Gov. Andrew M. Cuomo’s most trusted aides and closest friends, Joseph Percoco, was convicted of soliciting and accepting more than $300,000 in bribes from executives with business before the state, the governor quickly distanced himself.

There would be “no tolerance” for corruption, he said, calling Mr. Percoco’s behavior the opposite of everything he hoped his administration represented.

“The rule of law is paramount,” Mr. Cuomo said in 2018, when Mr. Percoco was sentenced to prison a few months later. “Joe Percoco is paying the price for violating the public trust.”

Privately, however, members of the governor’s inner circle — including one of his sisters — have for years been quietly raising money for Mr. Percoco, according to interviews and newly obtained emails.

As recently as last year, the group was helping to fund Mr. Percoco’s appeal of his conviction, after some of its members also helped finance a trust fund for his children.

“Joe and his family are grateful for all your support to date,” Ms. Cuomo wrote in the email, sent on Super Bowl Sunday. “Unfortunately, his fight is far from over, and in order to continue his legal battle he’ll need financial resources.”

She added: “My family and I will be participating in that effort, and I hope we can count on you to join in the effort.”

On Tuesday, Ms. Cuomo said that she had never told the governor about the fund-raising effort.

The Cuomo family has long had a close relationship with Mr. Percoco, who first worked for Mr. Cuomo’s father, Gov. Mario M. Cuomo, starting when he was 19, before eventually taking a top job with Gov. Andrew Cuomo.

Mr. Cuomo once described Mr. Percoco as “my father’s third son, who I sometimes think he loved the most.” But Mr. Percoco played an even larger role in Andrew Cuomo’s orbit, serving as the governor’s ultimate loyalist.

Mr. Percoco was found guilty in a federal trial of taking more than $300,000 in bribes, mostly from Competitive Power Ventures, a Maryland-based power company with state business. The bulk of that was in the form of a “low-show job” given to Mr. Percoco’s wife, Lisa Toscano-Percoco.

The case — one in a series of corruption convictions won by federal prosecutors in Manhattan — roiled Albany, especially because it centered on someone so close to the governor. Mr. Cuomo was never accused of wrongdoing.

When Mr. Percoco was arrested in 2016, Mr. Cuomo’s campaign committee paid $80,000 for his legal fees. But the governor has long maintained that he has not had any other involvement. The legal bills have totaled well over $1 million, according to several people who have been asked to contribute.

The revelations of the fund-raising effort help answer a question that has vexed the State Capitol for years: Who has been paying for the top-dollar lawyers who have represented Mr. Percoco? Before he was sentenced to six years in prison, his lawyers said he was facing impending bankruptcy.

Some of the same group of longtime allies and friends who received Ms. Cuomo’s email were also asked to donate to the trust fund for Mr. Percoco’s daughters, according to several of them.

Those donations exceeded $75,000, according to one person, who spoke on the condition of anonymity because the person was not authorized to discuss the fund-raising.

A spokesman for Mr. Cuomo said the governor had no knowledge of either effort.

In a statement, Madeline Cuomo said she organized the fund-raising effort for Mr. Percoco’s legal bills on her own because of their friendship.

“I have known Joe most of my life, and I care for my friend,” she said. “I did want to help him, but once the pandemic hit, everyone’s priorities quickly shifted. My brother Andrew was neither involved with, nor privy to, my independent effort. I still believe helping a friend is the morally right thing to do.”

Lawyers for Mr. Percoco, including his lead trial attorney, Barry Bohrer, did not respond to requests for comment. Mr. Bohrer’s firm, Schulte Roth and Zabel, is still owed money from the trial, according to several people who were asked to help.

In interviews this week, several people who donated said they did so because of their history with Mr. Percoco and sympathy for his family, not because the Cuomos asked them to give, and not out of loyalty to the governor.

“It wasn’t a big deal,” said Meyer S. Frucher, a longtime Cuomo family friend and former aide to Mr. Cuomo’s father. “Joe was someone I knew and worked with in government for a long time. Everybody needs legal counsel.” 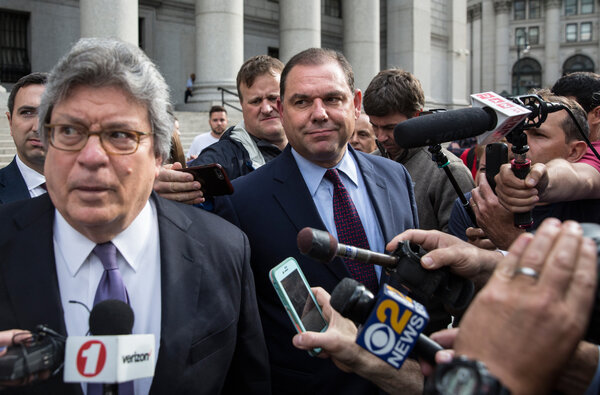 Critics recently have recalled the Percoco case as Mr. Cuomo has found himself embroiled in several investigations into his administration and his conduct.

“I will remind you the governor’s top political aide went to federal prison for corruption and bribery,” Bill de Blasio, the mayor of New York City, said in response to a question about Mr. Cuomo during an interview with the WNYC radio host Brian Lehrer in March. “There’s a history of corruption in Albany, and the governor has been a central part of it.”

The state attorney general, Letitia James, is looking into accusations of sexual harassment and assault made against Mr. Cuomo by several women. At the same time, federal investigators are looking into his administration’s handling of nursing homes during the pandemic and, separately, whether Mr. Cuomo’s family and other prominent people improperly received special access to coronavirus testing.

Federal investigators have also asked about the book that Mr. Cuomo wrote last year, a memoir on his leadership during the pandemic that garnered him a $5.1 million deal.

Some prominent Democrats, including Senator Chuck Schumer and the leader of the New York State Senate, Andrea Stewart-Cousins, have called on Mr. Cuomo to resign. The State Assembly has begun an impeachment inquiry.

One of the lawyers whom Ms. James has tapped to investigate the sexual harassment claims against Mr. Cuomo is Joon H. Kim, a former acting U.S. attorney who was involved in the prosecution of Mr. Percoco.

The conviction came as part of a series of corruption prosecutions based on the testimony of the lobbyist Todd R. Howe, a longtime Cuomo family loyalist, who pleaded guilty and helped prosecutors win several other cases, including against Alain E. Kaloyeros, the architect of many of the governor’s economic development efforts.

Unlike Mr. Howe, Mr. Percoco did not cooperate with the federal investigators.

Mr. Percoco, 52, is appealing the conviction. Last year, he unsuccessfully asked to be released from prison because of health concerns during the pandemic.

One of the people who has helped organize the fund-raising effort for Mr. Percoco’s legal fees is John Marino, the former head of the New York State Democratic Party, according to people who have been asked to contribute. Mr. Marino, a former three-time campaign manager for Gov. Mario Cuomo, is now managing partner at DKC, a public relations firm. (Mr. Marino did not respond to a request for comment.)

The other people who were involved in the effort or were asked to contribute are a who’s who of Gov. Andrew Cuomo’s closest confidants. They include Steve Cohen, his former top aide; Mylan Denerstein, his former chief counsel; Jennifer Bayer Michaels, his longtime campaign finance director; Lucille Falcone, a former fund-raiser and ex-girlfriend; and Michael Dowling, the head of Northwell Health, who has played a key role in the state’s response to the pandemic.

Mr. Cohen said he did not contribute. “Although I wish Joe and his family well, I wasn’t in a position to help,” he said. A Northwell spokeswoman said Mr. Dowling had not taken part in raising funds. Ms. Denerstein declined to comment. Ms. Michaels and Ms. Falcone did not respond to calls seeking comment.

Among the people who were asked to contribute to the trust fund for Mr. Percoco’s daughters were Gregg S. Hymowitz, a hedge fund manager, and longtime Cuomo friend and donor, and David Weinraub, a lobbyist who was once legislative director for Gov. Mario Cuomo. Mr. Hymowitz said he did not contribute; Mr. Weinraub said he had.

“I gave independently long before the email,” said Mr. Weinraub, citing his three decades as a colleague of Mr. Percoco. “Based on my relationship, I wanted to help his family.”

Indeed, many of those who gave or were asked to contribute to the efforts to help Mr. Percoco have ties that stretch back to the administration of Gov. Mario Cuomo.

“I have always believed that what we shared as a group would last a lifetime and beyond, because we were connected in spirit — heart and soul,” Ms. Cuomo wrote in the 2020 email. “And I think we should do everything we can to support one of our own.”