The president-elect is known for favouring a tone of unity but in his pre-Christmas address he tore into Donald Trump for failing to prioritise America’s cyber security.

One of the biggest cyber attacks in US history emerged last week. Hackers spent months exploring the systems of dozens of government agencies and corporations including the US Treasury, the departments of homeland security, state and defence. Federal officials warn the attack is still ongoing.

Joe Biden said indications suggest the culprit behind the attack is Russia and that the hack was being planned from as early as last year.

“This assault happened on Donald Trump’s watch, while he wasn’t watching,” said Mr Biden. “There’s still so much we don’t know. But we know this much; this attack constitutes a grave risk to our national security. It was carefully planned and carefully orchestrated.”

Mr Biden said once he understands the extend of the damage the US will respond and “probably in kind” suggesting some sort of retaliatory move. Joe Biden also said the current administration is not sharing everything it knows with his transition team. 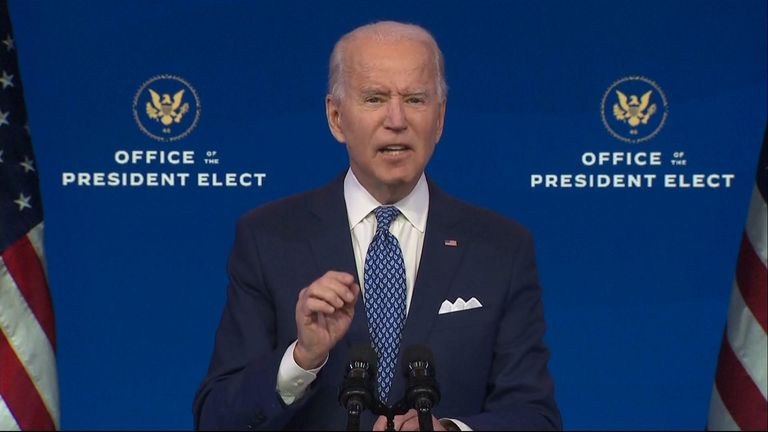 The intelligence community, Secretary of State Mike Pompeo and Attorney General William Barr have also said Russia was likely responsible for the hack. But Donald Trump has cast doubt over Russia’s role on Twitter and hinted at China’s involvement.

“The Trump administration needs to make an official attribution,” said Joe Biden. “It is still his responsibility as president to defend American interests for the next four weeks, but rest assured that even if he does not take this seriously, I will.”

The president-elect said he was prepared to spend billions of dollars on reinforcing America’s cyber security but couldn’t say for sure if the current systems were safe.

This is just one of many crises facing the United States as the pandemic’s second wave continues to soar in much of the country. Mr Biden warned the darkest days are still ahead in the fight against coronavirus.

Meanwhile he welcomed a $900bn (£6.7bn) coronavirus relief bill passed in Congress on Monday. After months of wrangling, the funding was regarded as underwhelming by many but essential to millions of struggling businesses and the unemployed.

Joe Biden called this a “down payment” on what is actually needed and said he’d ask lawmakers for more help after he takes office on 20 January.

Donald Trump has remained largely quiet regarding most of these issues on Twitter. His tweets show little evidence he is still running the country but continue to peddle baseless claims about a rigged election.