The police officer who shot a black man after a traffic stop in a Minneapolis suburb has been identified as a veteran of 26 years.

Kim Potter shot Daunte Wright on Sunday, on the outskirts of the same city where George Floyd was killed last year.

Police chiefs believe she accidentally used her gun instead of a Taser, with the officer recorded on body-cam saying “Holy s***, I just shot him” as Mr Wright managed to drive off.

The shooting sparked a second evening of unrest on Monday when several hundred defied a curfew and gathered at the Brooklyn Center police station chanting the 20-year-old’s name. 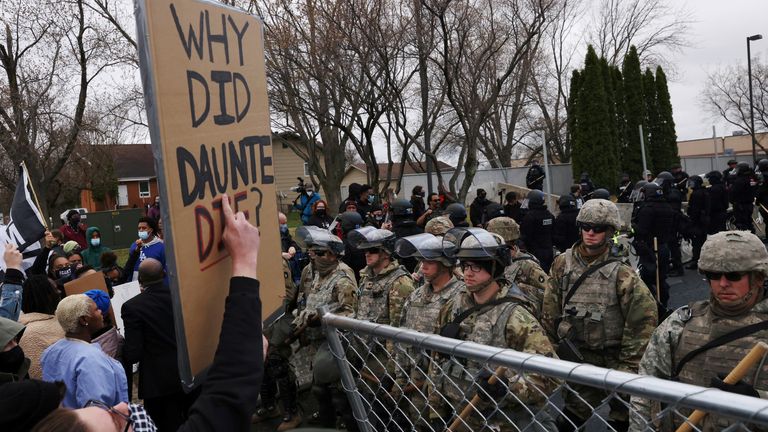 Officers in riot gear fired a small number of gas canisters and flash-bang grenades after some demonstrators threw bottles and other objects.

“Move back!” police ordered. “Hands up! Don’t shoot!” they chanted back.

National Guard troops had been expected to more than double to over 1,000 by Monday night in case the situation escalated.

Authorities said Mr Wright was pulled over for having an expired registration and that police tried to arrest him after discovering he had an outstanding warrant.

Video shows a scuffle after he tries to avoid being handcuffed and gets back in his car – it’s then that Kim Potter is heard shouting “Taser” several times before firing her handgun.

Mr Wright managed to drive several blocks before crashing and died from a gunshot wound to the chest, according to the medical examiner.

Kim Potter is on administrative leave and Brooklyn Center police chief Tim Gannon released the body-cam footage on Monday, telling reporters he believed the shooting was a mistake.

“This appears to me from what I viewed and the officer’s reaction in distress immediately after that this was an accidental discharge that resulted in the tragic death of Mr Wright,” he said. 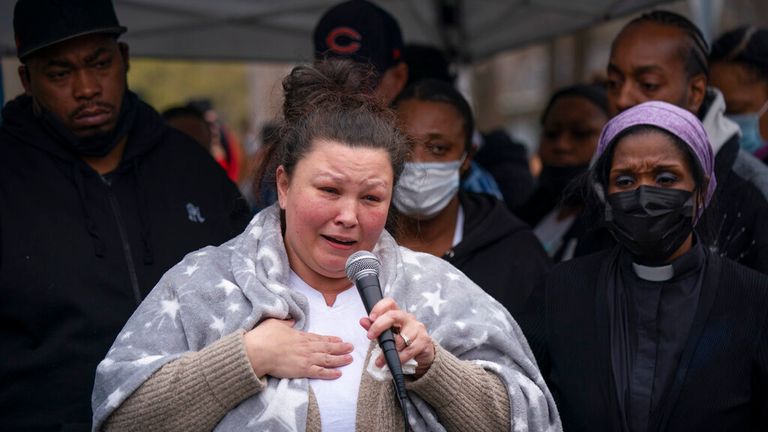 His family have rejected that suggestion and his half-brother, Dallas Wright, told a vigil on Monday: “My brother lost his life because they were trigger happy.”

His mother Katie Wright said: “My heart is broken in a thousand pieces… I miss him so much, and it’s only been a day.

“He was my life, he was my son and I can never get that back. Because of a mistake? Because of an accident?”

Brooklyn Center mayor Mike Elliot has called the shooting “deeply tragic” and wants the officer to be dismissed. 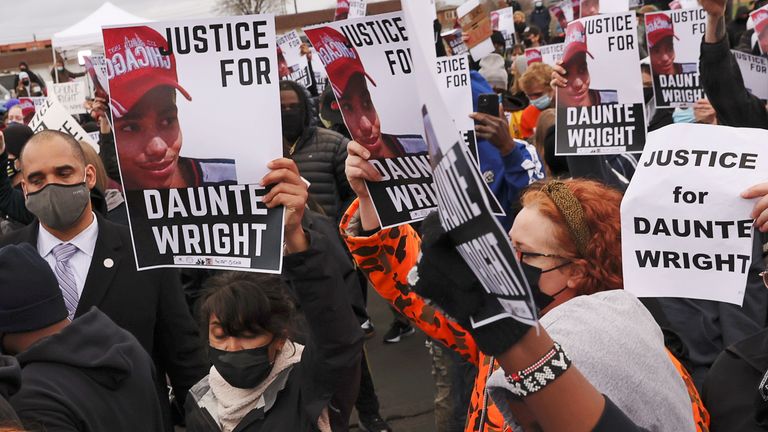 It comes as tensions in Minneapolis remain high as the trial over the death of George Floyd takes place 10 miles away, with police officer Derek Chauvin accused of murder.

The lawyer who helped win a $27m civil settlement for the Floyd family said he was now representing the Wright family.

“Daunte Wright is yet another young Black man killed at the hands of those who have sworn to protect and serve all of us – not just the whitest among us,” said Ben Crump in a statement.

Mr Wright’s father, Aubrey, told the Washington Post his son had dropped out of high school due to a learning disability and was working several jobs to support his two-year-old son.

President Joe Biden has called or a “full-blown investigation” and urged people to remain peaceful.