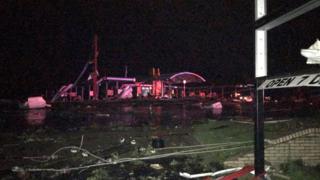 At least three people have been killed as tornadoes sweep across Missouri in the US Midwest, local officials say.

Extensive damage has been reported around the state, and officials say several people were injured in Carl Junction near the border with Kansas.

Emergency sirens were activated in Jefferson City – home to around 43,000 people – and the storm was spotted 20 minutes later.

BREAKING: We’re getting our first look at damage in #JeffersonCity. This Best Western off Highway 54 has downed power lines, tree branches and on overturned truck in its parking lot. @KOMUnews pic.twitter.com/EWXPi6rXwz

@MSHPTrooperF is also in Eldon assisting Eldon Police Department and Miller County Sheriff Department after tonight’s tornado. If you are NOT affected, please stay clear of the area and let first responders do their jobs. #MoWx pic.twitter.com/GxlNmZ3xtl

More storms are expected to hit the Midwest on Thursday and Friday.

Emergency officials have warned of flash flooding, and are reportedly carrying out door-to-door searches amid reports of trapped residents.

Earlier, the US National Weather Service issued a rare “high warning” for severe storms in the region.

“It’s a chaotic situation right now,” Jefferson City Police Lt David Williams told reporters. “We need people who are not affected to stay out of those areas”.

The storms on Wednesday hit on the eighth anniversary of a tornado which killed 161 people in Joplin, a city in southeast Missouri.

Are you in the area? If it is safe to do so please share your experiences by emailing [email protected].