With the debates now over, we have come to the final days of the high-speed election campaign that was called last month by Prime Minister Justin Trudeau. 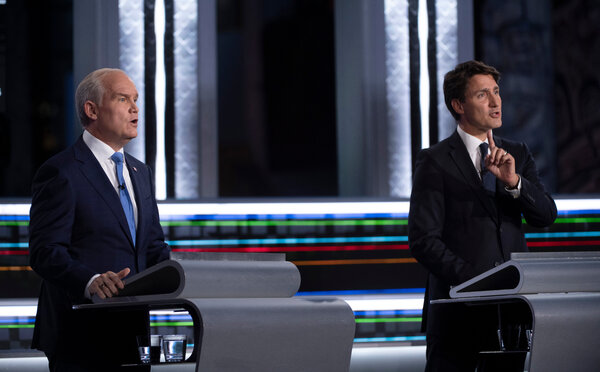 At the official debates, moderators dominated and, in the view of many, party leaders hardly debated.

Among the issues given cursory treatment was gun control, a topic that the Conservative Party’s platform has reversed course on.

Few issues divide urban and rural Canada more than guns. In cities and suburban areas, polls have shown for years that there’s strong support for even tighter restrictions. Horrific crimes like last year’s shooting and arson spree in Nova Scotia increase that sentiment.

But in many rural areas and Indigenous communities, guns are a part of everyday life. Totaling up the numbers has been difficult since the Conservative government led by Stephen Harper eliminated the registry for shotguns and standard rifles. But the Small Arms Survey, a project based in Switzerland, estimates that there are 12.7 million legal and illegal guns held by private owners in Canada. There are 2.2 million Canadians who hold a license to buy and own guns.

Last year, Prime Minister Justin Trudeau banned 1,500 models of assault-style semiautomatic rifles after the shooting rampage in rural Nova Scotia that left 23 people dead. Although some designs of semiautomatics can still be owned, their use is limited.

Erin O’Toole, the Conservative leader, began the election campaign by promising to roll back Mr. Trudeau’s assault weapon ban and roll back other Liberal anti-gun measures. He argued that they penalized law-abiding gun owners but did little or nothing to stop gun crime, although assault weapons have been used in mass shootings in Canada.

In place of a ban, he proposed cracking down harder on smuggling, something Mr. Trudeau had already advanced, and hiring 200 additional members of the Royal Canadian Mounted Police who would be assigned to gun and gang crimes in Toronto and Vancouver.

While there was little broad public support for loosening of gun rules, gun groups and many gun owners are strong and reliable supporters of the Conservatives.

But as criticism grew over his plan to cancel Mr. Trudeau’s ban, Mr. O’Toole began to change his tune.

First, he said during an unofficial French debate on TVA, the Quebec-based broadcaster, that he would “maintain a ban on assault weapons.” While he didn’t make it immediately clear, he didn’t mean Mr. Trudeau’s ban. Instead, Mr. O’Toole was referring to a ban that dates to the 1970s on weapons like fully automatic rifles.

But eventually Mr. O’Toole said that he would keep Mr. Trudeau’s assault weapon ban in place if the Conservatives take power. But that came with a significant qualifier: Mr. O’Toole also promised that a group that will include gun makers will review firearms laws and regulations.

The National Firearms Association, which once hired one of Mr. O’Toole’s top aides as a lobbyist, soon issued a statement saying that it was “completely confident that the election of a Conservative government” and the review would lead to the repeal of Mr. Trudeau’s assault weapon ban. Mr. O’Toole has only said that he won’t prejudge the proposed review.

The platform change that the Conservatives made appears to have worked for their campaign by muting criticism of Conservative gun policy — guns received just cursory attention at the English debate. And when Angus Reid Institute asked Canadians to list the top issues in the campaign, guns didn’t meet the minimum reporting threshold.

My colleagues Sheera Frenkel and Cecilia Kang will be speaking on Sept. 14 at 5 p.m. Eastern about their new book “An Ugly Truth: Inside Facebook’s Battle for Domination” in a virtual event organized by the Rotman School of Management at the University of Toronto. The school has a special offer for Canada Letter readers. If you use the code NYTIMESROTMAN21 when registering here you’ll be able to join the livestream and receive a hardcover copy of their book by mail for 21.99 Canadian dollars, a 20-dollar reduction.

Perhaps the biggest distraction from politics this week for many Canadians was the U.S. Open where Leylah Fernandez, 19, of Montreal will play in the women’s final against Emma Raducanu, a British player who was born in Toronto. David Waldstein writes that Fernandez is the most successful member of a group of Canadians at the Open, “where Canadian players are winning on courts across the grounds and beyond.” Fernandez is also part of a group of teenagers who are on a run at the open. But Matthew Futterman writes that, in tennis, early success can quickly “go off the rails.”

As Hurricane Larry continues on a path that appears to be taking it to Newfoundland, you can track its progress here.

In 2018, a team of paleontologists from the Royal Ontario Museum discovered the preserved shell of a spaceship-shaped creature during a fossil hunting expedition in the Rockies. Now Titanokorys gainesi has been declared to be one of the earliest-known large predators on Earth.

Stephen Vizinczey, who formed his own publishing company in Toronto to publish his racy and successful novel “In Praise of Older Women: The Amorous Recollections of Andras Vajda,” has died at the age of 88.

Jon Caramanica, a pop music critic for The Times, writes that Drake’s new album “demonstrates how sonically rigorous even the most casual, tossed-off Drake songs are.”

Brandon Valdivia, a producer from London, Ontario, better known as Mas Aya, told Isabelia Herrera that he is “trying to meld a political take in addition to a very spiritual take” in his music.

How are we doing?
We’re eager to have your thoughts about this newsletter and events in Canada in general. Please send them to [email protected]

Like this email?
Forward it to your friends, and let them know they can sign up here.