Republicans’ decision to push through a Supreme Court confirmation fuels the prospect for big changes to minority power should Democrats take the majority. 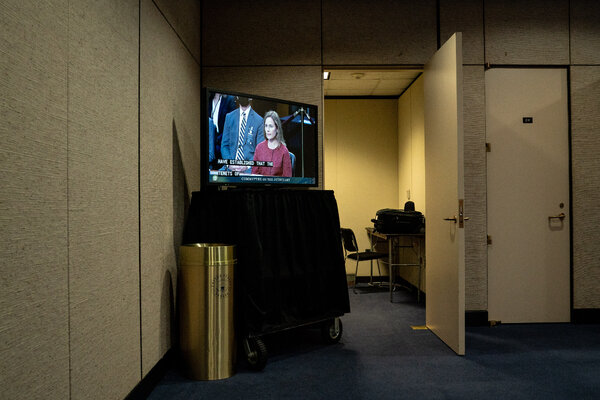 WASHINGTON — Judge Amy Coney Barrett is on a glide path to the Supreme Court, but she will leave behind a Senate badly torn by its third confirmation blowup in four years, with the potential for severe repercussions should Democrats take control next year.

The decision by Senator Mitch McConnell and Republicans to push through Judge Barrett’s nomination to the high court on the eve of the election, after blocking President Barack Obama’s pick under similar circumstances in 2016, enraged many Democrats who saw it as a violation of Senate norms and customs. With some already contemplating consequential changes, they were coming under increased pressure from progressive activists demanding payback, in the form of an end to the legislative filibuster and an expansion in the size of federal courts should Joseph R. Biden Jr. triumph in the presidential race and Democrats take the Senate.

In the aftermath of the confirmation hearing, Senator Chuck Schumer of New York, the minority leader, said it would be premature to discuss what Democrats might do if they won the Senate majority. But he did not dismiss the idea that changes could be in store should the party prevail, only to hit roadblocks erected by a Republican minority in 2021.

“First we have to win the majority because if we don’t, all of it is moot,” he said in an interview. “If we do, I’ve told my colleagues that everything is on the table if they jam through this nominee.”

Democrats have been hesitant to discuss their plans should they gain power, not wanting to provide Republicans — who are playing defense around the country — with an issue that could alienate voters. Mr. Biden has pointedly declined to give his opinion on adding seats to the courts, but during a Thursday night town-hall-style interview on NBC, he said he was “open” to the idea depending on how Republicans handled Judge Barrett’s nomination.

Yet even before the current fight, progressive groups were urging Democrats to be ready to ditch the filibuster, which allows the minority to block legislation by setting a 60-vote threshold for action.

Judge Barrett’s nomination only added fuel to that fire. Activists — and some senators — say allowing the filibuster to remain in place if Democrats took control would hand minority Republicans the ability to block Mr. Biden’s agenda as they did Mr. Obama’s, maintaining the gridlock that has plagued Washington. Eliminating the 60-vote requirement would probably also be a prerequisite if Democrats decided to pursue enlarging the Supreme Court.

Republicans say ending the ability to filibuster would in effect destroy the Senate by weakening the minority rights that have historically been a cornerstone of the institution. They say the cry for change amounts to a tantrum by Democrats who have been outmaneuvered on judges, comparing it to a 2013 showdown when Democrats changed rules to ease judicial confirmations and ultimately opened the floodgates for Mr. Trump to install more than 200 new judges. 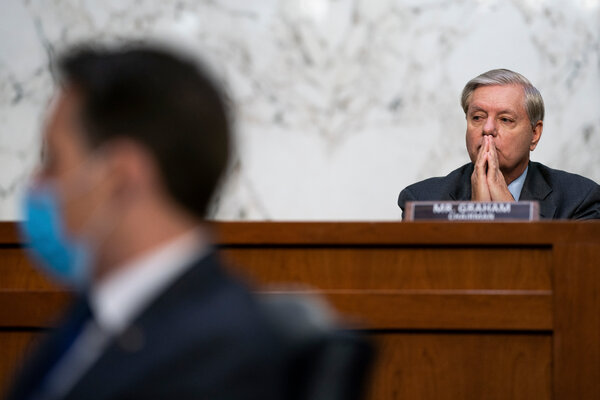 “For nearly 20 years, any time the confirmation process has temporarily disappointed Democrats, they have insisted the system is illegitimate and rules need tearing up,” Mr. McConnell, the Kentucky Republican and majority leader, said this week.

Advocates for expanding the court say it is only fair, since Republicans thwarted Mr. Obama from filling a Supreme Court vacancy in 2016 with 11 months remaining in his tenure while also holding open scores of lower court vacancies so they could be filled by Mr. Trump. And they have made it clear that they want Democrats to take a bare-knuckled approach should they win power, pressing for Senator Dianne Feinstein, the courtly 87-year-old Californian who is the ranking member of the Judiciary Committee, to be shoved aside from the chairmanship in favor of someone more ready to do battle with Republicans.

For now, the confirmation conflict looms as a major subject in the election, which is shaping up as a referendum on the future of the Senate.

Republicans say the fight could boost some of their endangered incumbents by reminding voters of the value of Senate control when it comes to judges. They argue that Judge Barrett resonated with their voters as a high achieving, ardently anti-abortion conservative woman.

“I can just say in South Carolina, people like conservative judges, that there’s a preference for conservative Supreme Court justices,” said Senator Lindsey Graham, South Carolina Republican and the Judiciary Committee chairman who is in a tough battle to hold his own seat. “Amy Barrett fits South Carolina.”

Yet Mr. Graham acknowledged Thursday that Democrats “have a good chance of winning the White House” — an outcome that would also significantly boost their prospects of taking over the Senate.

Given their limited procedural weapons, Democrats said they believed they did about as well as could be expected by keeping the confirmation hearing focused mainly on the potential threat to the Affordable Care Act posed by the nominee. The health care access message helped sweep them to a House takeover in 2018 and dovetailed with what Democratic challengers are emphasizing in their campaigns this year.

“The American people now know that the Republicans are all for taking away their health care, whether through legislation or through the courts,” said Mr. Schumer, who planned the strategy with Democrats on the Judiciary Committee.

Democrats also managed to avoid getting drawn into a debate over Judge Barrett’s Catholicism, despite the best efforts of Republicans to lure them into one in hopes of provoking a backlash. Top Democratic campaign strategists say they have seen gains in polling in individual races with voters who considered the Republican rush to confirmation an overreach.

“You are motivating people to vote,” Senator Amy Klobuchar told Republicans on the panel.

Whether Democrats would move to gut the filibuster, expand the court or institute other changes would depend on multiple factors even should they win. Mr. Biden, a former longtime member of the Senate, would be cautious about upending an institution he reveres. In addition, how the Republicans respond to a Democratic takeover would be a major consideration. Plus the margin of victory and the size of the party divide in the Senate would also factor into the debate.

But should Democrats plunge ahead, they would no doubt point to the handling of Judge Barrett’s nomination as one justification. As Republicans on Thursday batted away an effort by Judiciary Committee Democrats to slow the nomination, Senator Sheldon Whitehouse, Democrat of Rhode Island, raised the prospect of such retaliation.

He warned Republicans that they would have little room to complain because of the way they steamrollered Democrats by fast-tracking Judge Barrett’s nomination, pushing for a vote before her hearing was even concluded to make certain she would be seated by the Nov. 3 election.

“Don’t think when you have established the rule of ‘because we can’ that should the shoe be on the other foot, you will have any credibility to come to us and say, ‘Yeah, I know you can do that but you shouldn’t because of X, Y or Z,’ ” he cautioned his Republican colleagues. “Your credibility to make that argument at any time in the future will die in this room and on that Senate floor if you continue to proceed in this way.”