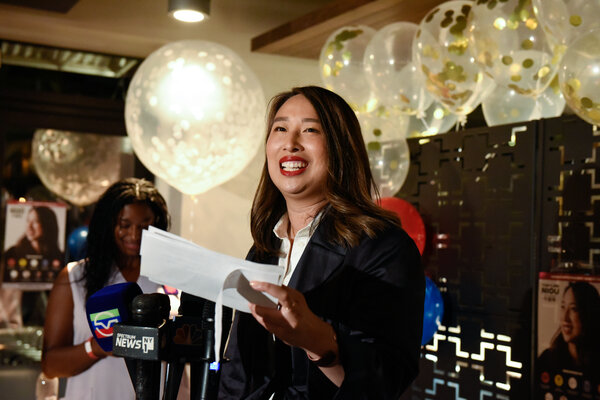 For weeks, left-leaning New York City Democrats have publicly debated whether to launch a third-party bid in a race for a rare open House seat in the heart of New York City.

But on Tuesday, they decided to take a pass, as Yuh-Line Niou, a state assemblywoman who finished second to Daniel S. Goldman in August’s Democratic primary, declared that she would not seek a rematch using the Working Families Party ballot line in November after all.

“We are conceding the primary and I will not be on the WFP line for the general,” Ms. Niou, 39, said, referring to the Working Families Party, during a seven-minute video she posted to Twitter around 9 p.m.

“We simply do not have the resources to fight all fights at the same time, and we must protect our democracy now,” Ms. Niou added.

The decision provided a reprieve not just to Mr. Goldman, a former assistant U.S. attorney who made his name prosecuting the first impeachment case against President Donald J. Trump, but also to some Democratic Party leaders, who feared a fight between the party’s left and more centrist wings would divert resources from races more pivotal to retaining control of Congress.

Mr. Goldman, 46, is now all but assured of a victory in November; the Republican candidate, Benine Hamdan, is thought to have little chance in the heavily Democratic district.

Progressive activists, who had eagerly stoked a fight to block that path, were certain to be disappointed in the outcome. They believe that Mr. Goldman was too moderate and accused him of buying one of the city’s most liberal districts, which connects Lower Manhattan and parts of Brooklyn, by pouring nearly $5 million of his own fortune into the race. With a 13-person primary field narrowed to just two, they argued Ms. Niou stood a better chance.

But other allies bluntly advised Ms. Niou that she could not win a rematch given Mr. Goldman’s personal fortune, the compressed timeline and the institutional support rallying around him in New York and Washington. Ms. Niou and the Working Families Party, which was prepared to share its ballot line with her in November, grudgingly came to agree.

Though it is its own fully fledged political party, the W.F.P. is more typically a force in Democratic primaries, acting to push candidates to the left. Only rarely does it back a challenger to a Democrat in a general election. It has never done so in a congressional race.

“We have always been sober about the structural barriers we face when running grass-roots candidates against the power of immense wealth,” Sochie Nnaemeka, the party’s director in New York, said in a statement.

Ms. Nnaemeka added that the party would be focused on defeating Republicans, and urged Mr. Goldman to “take note of the progressive positions shared by candidates who cumulatively received a majority of the vote.”