Weather: Scattered showers early, then the skies will clear; high in the mid-60s. Nice all weekend but cooler, with highs in the low 50s. 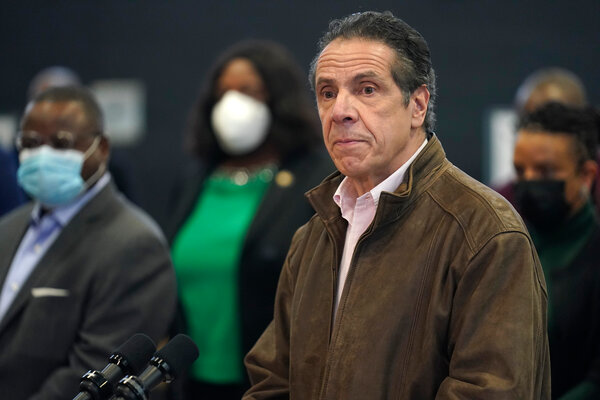 New York State lawmakers, many of them Democrats, opened an impeachment inquiry into Gov. Andrew M. Cuomo on Thursday, signaling that members of the governor’s party were abandoning him amid a series of sexual harassment allegations.

The State Assembly announced that its judiciary committee would have broad jurisdiction to investigate sexual harassment claims against the governor, as well as his administration’s handling of data about coronavirus-related deaths at nursing homes, before deciding whether to open impeachment proceedings.

The growing support for the inquiry, and calls for the governor’s resignation, could signify a bleak political future for Mr. Cuomo, whose decade-long tenure has been defined by an often-intimidating approach that has alienated potential allies whom he now needs.

[The governor faces a new threat: an impeachment inquiry led by Democrats.]

Six women, some of them current or former state employees, say that Mr. Cuomo sexually harassed or behaved inappropriately with them.

The Albany police said that the most recent accusation might have reached the “level of a crime.”

Mr. Cuomo has apologized for workplace remarks that may have upset colleagues, but he has denied touching anyone inappropriately.

In the controversy over nursing home deaths, recent reporting by The New York Times indicated that members of Mr. Cuomo’s administration spent months obscuring the number of people who died in them.

Many Democratic state lawmakers have been leery of openly challenging Mr. Cuomo. But now the compounding scandals are interfering with government operations, like passing a new budget, and political pressure on the governor is growing.

Mayor Bill de Blasio called for Mr. Cuomo’s resignation yesterday, as did 59 Democratic members of the State Legislature — about 40 percent of the party’s members in the Assembly and Senate — before the investigation was announced.

“He no longer has the credibility to lead or to govern effectively,” Assemblyman Jonathan G. Jacobson, a Democrat, told my colleagues Luis Ferré-Sadurní, Jesse McKinley and J. David Goodman on Thursday.

Mr. Cuomo has said that he will not resign, but impeachment proceedings might change his thinking. Eliot L. Spitzer, the last governor of New York to resign, in 2008, only did so after the Legislature began to draw up articles of impeachment.

He Was Caught Jaywalking. He Was Almost Deported for It.

Why Black Women Are Rejecting Hospitals in Search of Better Births

‘A Blabbermouth With a Podcast’: Juror’s Rants Are Grounds for Appeal

From New York Times Opinion: I Was An E.M.T. In New York Last Spring

Families of people who died on Sept. 11, 2001, will resume reading the victims’ names out loud this year on the anniversary of the terror attack. [Daily News]

What we’re watching: The Times’s Albany bureau chief, Jesse McKinley, and the Metro political reporter Dana Rubinstein discuss the pressure building on Gov. Andrew M. Cuomo to resign on “The New York Times Close Up With Sam Roberts.” The show airs on Friday at 8 p.m., Saturday at 1:30 p.m. and Sunday at 12:30 p.m. [CUNY TV]