CÚCUTA, Colombia — The first in a wave of defectors was a sergeant in Venezuela’s national guard: He sneaked over the border into Colombia in early February and declared he no longer supported President Nicolás Maduro.

“We have to eat nothing but rice and beans every day,” said the sergeant, Harry Solano.

Since then, at least 350 other members of the armed forces have joined Mr. Solano, pouring over the border to ask for sanctuary, according to the Colombian government. The majority came over the weekend, after Juan Guaidó, an opposition leader who has declared himself Venezuela’s interim president, called for the military to join his effort to weaken Mr. Maduro’s grip on power and break his blockade on humanitarian aid.

While the desertions are not good news for Mr. Maduro, they are not exactly what the opposition had hoped for, either.

Mr. Guaidó, whose claim to leadership has the backing of more than 50 countries, had hoped that forcing members of the armed forces to choose between denying humanitarian aid to the population and obeying Mr. Maduro would lead to mass defections. Those soldiers would remain in the country, he hoped, and force Mr. Maduro from the presidential palace. 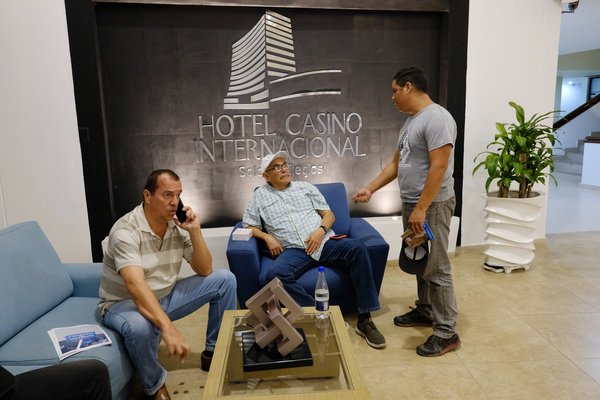 [Venezuela’s government denies the country is in crisis and refuses aid. The opposition sees in this an opportunity.]

Instead, defectors represent a slender percentage of the security apparatus — and the dissident soldiers, afraid for their lives, are heading for Colombia. But the number is growing each day.

“The morale has got to be abysmal among the Venezuelan armed forces right now, and the interviews with defectors seem to reveal that,” said Adam Isacson, the director of defense oversight at the Washington Office on Latin America, adding that the number of desertions might grow in coming weeks.

The defections did add a new wild card to a growing border standoff between Venezuela and Colombia, which has led Mr. Maduro to first close several border crossings and then angrily cut off diplomatic ties over the neighboring country’s aid to the opposition.

“If a Venezuelan unit ever tries to use force to stop would-be defectors near the line, it could be ugly,” Mr. Isacson said.

The foreign minister of Venezuela, Jorge Arreaza, disputed that any more than a few dozen military members had crossed into Colombia this past weekend. In an interview on Monday at Venezuela’s United Nations mission, Mr. Arreaza accused Colombian and American officials of having falsely reported far more defections and desertions as part of what he described as their agenda to topple Mr. Maduro.

Mr. Maduro still has the loyalty of senior officers, whom his administration has courted with promotions and lucrative contracts. And the opposition’s effort to deliver humanitarian aid over the weekend was easily fended off by forces loyal to him, armed with tear gas and rubber bullets.

But the embarrassment of having scores of low- and middle-ranking security forces defect to the other side — many caught by Colombian news crews as they stumbled out of the bush with their hands raised in surrender — was not without political repercussions, said David Smilde, a sociologist who studies Venezuela at Tulane University.

“We haven’t seen images like that since the fall of communism,” Mr. Smilde said. “It makes it clear how much fear there is among soldiers and security agents who feel that they now have to flip and come across the border.”

The scenes were also widely broadcast, which could encourage other defections.

“Good morning, I’m First Sergeant of the National Guard Muñoz Contreras Aerzair,” said one man on Monday to Colombian station W Radio shortly after crossing into the country. “I am with President Juan Guaidó and I don’t agree at all with Nicolás Maduro. What he wants to do is kill the people.”

Some of the scenes of desertions, witnessed by New York Times reporters during a battle between protesters and Venezuelan security forces on Saturday, reflected the volatility now common on the heavily militarized border.

When a group of uniformed Venezuelan soldiers climbed out of a riverbed separating their country from Colombia in the middle of the afternoon, opposition protesters greeted them with a hail of stone — until they realized the soldiers were deserters, not assailants.

Then the crowd broke into cheers and began to assist them, carrying at least one man, who was badly wounded, into a nearby government building.

Mr. Solano, the sergeant who escaped to Colombia this month, said he was part of a brief uprising at a military base in Caracas that took place in late January, just two days before Mr. Guaidó declared himself president. The government claimed soldiers looted weapons and took a number of hostages; 27 of the dissidents were arrested.

Among those who escaped was Mr. Solano. He described a harrowing journey in which he cautiously crossed the country, with the help of national guardsmen who were friendly to his cause.

“They congratulated me, and they were helping me,” Mr. Solano said.

The armed forces are suffering from the same shortages of food and medicine as other Venezuelans, Mr. Solano said. The opposition has repeatedly used this argument to try to get soldiers to flip.

In a month a member of the national guard earns 2,000 bolívars — but a kilo of meat costs 8,000 bolívars, and a carton of eggs, 9,000 bolívars, said Mr. Solano, explaining how the country’s devastating inflation has obliterated the purchasing power of so many.

“How does a soldier support his family?” he asked. “How can they buy things to live properly?”

Mr. Solano said his escape has had consequences for his family. Military intelligence agents took his children — ages 4, 6 and 17 — into custody, along with two other relatives. The Venezuelan human rights organization Foro Penal confirmed they had been seized, calling it an “abduction.”

Mr. Solano said that he has had no contact with the family members since they disappeared at the hands of the military, but that someone within the intelligence agency had told him some of them had been raped and tortured in custody.

“They did this so I would turn myself in,” he said.

Mr. Solano is now unemployed, living in temporary housing in Cúcuta, and uncertain what comes next. On a recent day he visited an office of the United Nations refugee agency in Cúcuta, filing registration papers and explaining that he fled for political reasons.

“Why did you change your mind about Maduro?” the employee asked.

“Well, because of the crisis,” Mr. Solano said. “My ideas began to change because I saw so many injustices and tortures.”