A pediatrician questioned whether Jews were being intentionally given “bad lots” of vaccines that ended up giving children a new strain of the virus. And Andrew Wakefield, the British doctor whose study linking measles vaccines with autism was widely discredited and condemned, appeared via Skype to offer an almost apocalyptic vision of a world in which vaccines were giving rise to deadlier immunization-resistant diseases.

“We Hasidim have been chosen as the target,” said the rabbi, Hillel Handler. “The campaign against us has been successful.”

Since the measles outbreak began last fall, the health authorities have embarked on a sweeping and exhaustive campaign, repeatedly urging people to get vaccinated and fighting the spread of misinformation. They have made special efforts in the ultra-Orthodox communities of Brooklyn and Rockland County, N.Y., where the disease has been spreading most quickly.

But the rally on Monday in Monsey, a Rockland County town about 30 miles northwest of New York City, vividly illustrated how the anti-vaccine fervor is not only enduring, but may be growing: Hundreds of ultra-Orthodox Jews packed a ballroom for a “vaccine symposium” with leaders of the anti-vaccination movement.

Organized by a Monsey-based Jewish group, the event also showed how the movement was gaining ground: Greg Mitchell, a Washington-based lobbyist who represents the Church of Scientology, attended the meeting and addressed the crowd, offering to be their “voice in the public-policy game.”

The gathering was denounced by local elected officials, health authorities and some ultra-Orthodox rabbis, who said the speakers were spreading propaganda that could cause the outbreak to deepen, risking the health of countless people.

The event was held in a large ballroom. As is customary at ultra-Orthodox gatherings, the men were separated by an improvised wall from the women. Speakers were introduced and applauded as if they were celebrities.

The remarks — and the rapt audience — illustrated how the anti-vaccination movement can exploit fear and anxiety within relatively insular communities, especially religious ones, to undercut scientifically sound warnings from health experts.

“They are doubling down and increasing their messaging — capitalizing on fear,” Dr. Jane Zucker, the assistant commissioner of immunization for the New York City health department, said in an interview. “Parents are afraid of who and what to believe.”

Rabbi Handler, a 77-year-old from Brooklyn who said he was a Holocaust survivor, set the tone for the night, claiming that Jews were being persecuted as disease carriers and were being attacked on the street in New York City for sneezing. (The Anti-Defamation League has strongly objected to the appropriation of Holocaust symbols by vaccine critics.)

Mr. de Blasio has issued a public health emergency for four ZIP codes in Brooklyn where ultra-Orthodox Jews live. That decision appeared to have earned him the ire of Rabbi Handler, who described Mr. de Blasio as a “sneaky fellow” and a closet German — “Wilhelm, his real name, was named after Kaiser Wilhelm of Germany.”

(In fact, none of this is true. Mr. de Blasio was born Warren Wilhelm Jr., and later decided to take his mother’s last name as his own after becoming alienated from his father.) 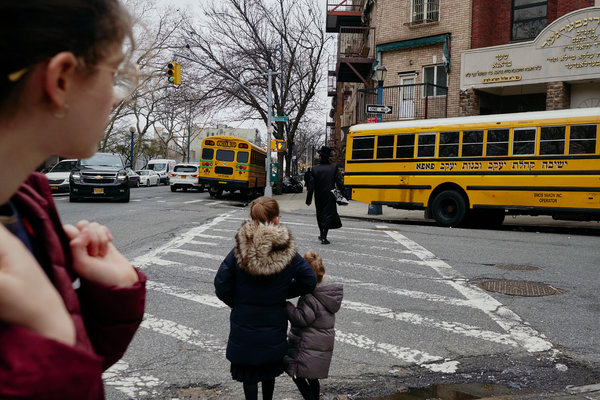 In a telephone interview on Tuesday, Rabbi Handler sought to soften his anti-vaccine remarks.

“I don’t mind if someone takes a vaccine. It’s not my business,” he said. “What am I, a fascist? Am I going to bring down the law?”

The pediatrician who spoke on Monday night, Dr. Lawrence Palevsky, is regularly cited in pamphlets circulated in New York City that urge women not to get their children vaccinated. His views have no basis in science, experts said.

At the rally, he talked at length about mutating viruses and falsely claimed that failed vaccines were producing a new strain of measles. Women scribbled into notepads as he spoke. Others filmed his comments, sending them to their contacts on WhatsApp. Essentially, he said, there were no studies available to show how the vaccine affects the human body.

“It’s fascinating because we’re told how contagious the disease is, but somehow it’s centered in the Jewish community.”

Dr. Palevsky could not be reached for comment on Tuesday.

Mr. Wakefield, who was stripped of his medical license in his native Britain some two decades ago for fraudulent claims linking vaccines to autism, accused the health authorities and the Centers for Disease Control and Prevention of misleading the public. But before doing that, he insisted on his own innocence.

“I wanted to reassure you that I have never been involved in scientific fraud,” he said via Skype from a darkened room, his face appearing eerily white as it was projected onto two large overhead screens. “What happened to me is what happens to doctors who threatened the bottom line of the pharmaceutical companies.”

Rockland County has the highest number of recorded cases after New York City. But there are other pockets of large outbreaks as well, and not all of them in are in religious communities.

The C.D.C. said on Monday that the number of measles reported across the country rose by 75 last week, bringing the total to 839 in 23 states, the highest number of cases the United States has seen since measles was declared eliminated in 2000.

New York City alone has seen 498 confirmed cases of the disease since September. In the rest of New York state, there have been 274 confirmed cases, according to official figures. About 80 percent of those cases were located in Rockland County.

New York authorities have used a number of tactics to force people to get immunized, including excluding unvaccinated children from going to schools with low vaccination rates or threatening thousand-dollar fines on parents for failing to vaccinate their children.

The strategies have been largely successful, health officials have insisted, even though there have been setbacks.

The county executive, Ed Day, issued a new declaration last month that sought to prevent people who were exposed to measles from being in public places.

Local officials, including Mr. Day and Rabbi Chaim Schabes, expressed outrage in a joint statement at the “outsiders” who organized Monday’s rally and “are targeting our community.”

“Tonight’s event and the misinformation being shared at it runs counter to every statement from the medical experts and elected officials of our county,” the statement read.

“This type of propaganda endangers the health and safety of children within our community and around the world, and must be denounced in the strongest language possible.”

Kimiko de Freytas-Tamura was previously based in London, where she covered an eclectic beat ranging from politics to social issues spanning Europe, the Middle East and Africa. Born and raised in Paris, she speaks Japanese, French, Spanish and Portuguese. @kimidefreytas • Facebook