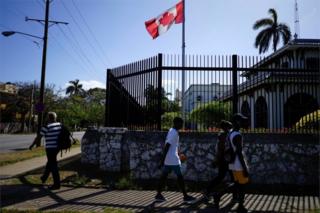 A group of Canadian diplomats is suing the country’s government for C$28m ($21.1m; £16.4m) after they succumbed to a mysterious illness in Cuba.

The group of 14, including diplomats’ family members, says Ottawa took too long to warn, evacuate and treat them.

Last year, Canadian and US officials were recalled from Havana after complaining of dizziness and migraines.

The cause of the illness is unknown, but Canada has discounted the idea of a “sonic attack” on its embassy.

In a statement, the diplomats said: “Throughout the crisis, Canada downplayed the seriousness of the situation, hoarded and concealed critical health and safety information, and gave false, misleading and incomplete information to diplomatic staff.”

“She has gaps in her memory, headaches, problems hearing. She picks up the telephone to make a call but forgets why, enters rooms without reason.”

According to CBC, staff at the Canadian embassy began experiencing symptoms of the so-called “Havana syndrome” in spring 2017.

Several families were subsequently moved from Havana, but until April 2018 Canada continued to post new staff to Cuba despite warnings from US counterparts who had received similar complaints.

The US withdrew most of its non-essential personnel from the country in September 2017 and said 21 embassy employees had been affected.

Last month, Canada said it would be cutting its embassy staff by up to half.

At a news conference in Washington, Canada’s Foreign Affairs Minister Chrystia Freeland said she was aware of the lawsuit.

“I am not going to comment on the specifics, but I do want to reiterate that I have met with some of these diplomats and, as I said to them, their health and safety needs to be our priority.”

Cuba has repeatedly denied any involvement in the incident.