Donald Trump is expanding curbs on legal immigration from six additional countries that officials have said do not meet security standards.

The move comes as a part of an election-year push to further restrict immigration.

The move is not a total travel ban, unlike an earlier effort from President Trump that caused outrage around the world from people who believed it unfairly targeted Muslims.

Immigrant visas have been restricted for Kyrgyzstan, Myanmar, Eritrea and Nigeria.

The visa is given to people seeking to live in the US permanently.

They include visas for people sponsored by family members or employers, as well as the diversity visa programme that made up to 55,000 visas available in the most recent lottery.

In December, for example, 40,666 immigrant visas were granted worldwide.

Sudan and Tanzania have had diversity visas suspended.

The US State Department uses a computer to select people from around the world for up to 55,000 diversity visas.

Nigeria is already excluded from the lottery along with other countries that had more than 50,000 natives immigrate to the US in the previous five years.

Non-immigrant visas were not affected.

Those are given to people travelling to the US for a temporary stay.

They include visas for tourists, those doing business or people seeking medical treatment.

During December, for example, about 650,760 non-immigrant visas were granted worldwide. 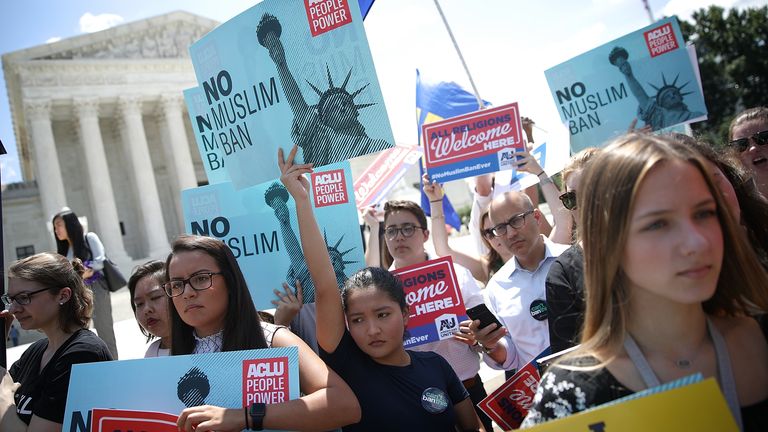 Acting Homeland Security Secretary Chad Wolf said officials would work with the countries on bolstering their security requirements to help them work to get off the list.

He said: “These countries for the most part want to be helpful, they want to do the right thing, they have relationships with the US, but for a variety of different reasons failed to meet those minimum requirements.”

The latest restrictions follow Mr Trump’s travel ban, which the Supreme Court upheld as lawful in 2018.

The government suspended most immigrant and non-immigrant visas to applicants from those countries.

Exceptions are available for students and those with “significant contacts” in the US.

Mr Trump was expected to sign a proclamation on the new restrictions as early as Friday.

They come as the US president tries to promote his administration’s crackdown on immigration, highlighting a signature issue that motivated his supporters before the election in 2016.

The US leader will be hoping it has the same affect during the election in November.

Mr Trump’s administration recently announced a crackdown on birth tourism and is noting the sharp decline in crossing at the US-Mexico border.

It is also citing progress on building the border wall.

A motorcyclist who shot a children’s author and parish councillor in his front garden during an ‘assassination attempt’ has been named. James Nash, 42, remains…

The UK could see record-breaking temperatures on Friday – with forecasters warning it could be the hottest day of the year so far. Temperatures are…

(Reuters) – The United States is negotiating the sale of at least four sophisticated aerial drones to Taiwan for the first time, sources told Reuters,…