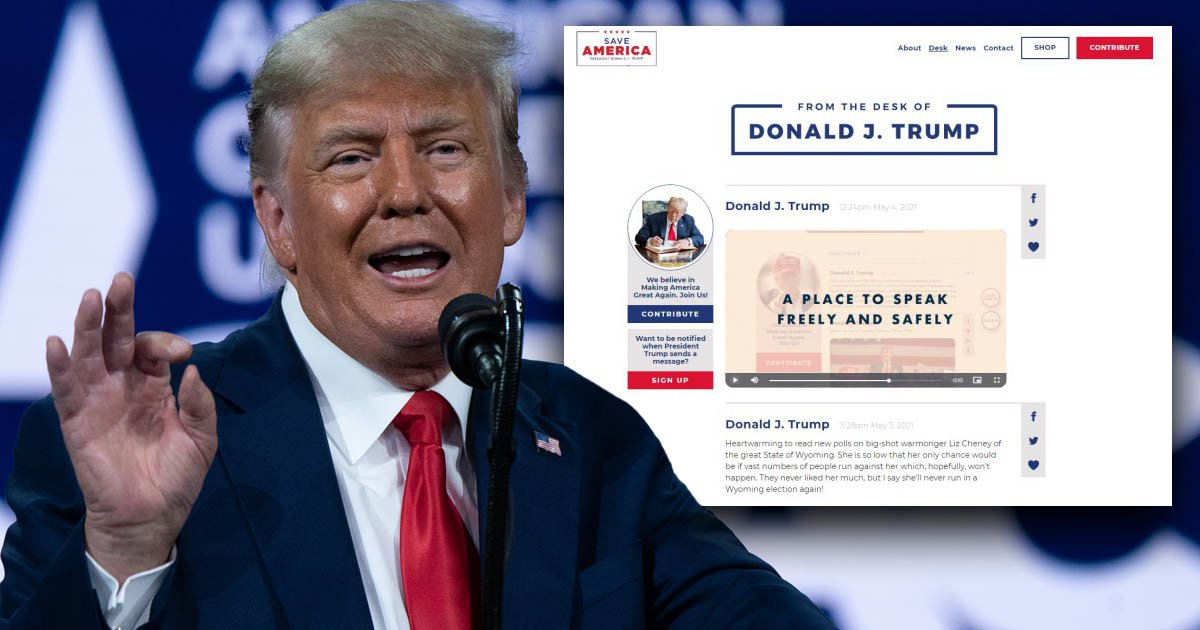 Donald Trump has unveiled a new blog, just as Facebook’s board is due to make a final decision on whether to suspend his account indefinitely.

‘From the Desk of Donald J. Trump’ is not the new social media platform the former president has long promised, despite it being branded ‘a place to speak freely’, his aides have said.

Instead it is merely a display of Trump’s recent statements with sharing buttons for Facebook and Twitter, platforms from which the Republican is still banned.

It also features a dramatic video which states: ‘a beacon of freedom arises.’

Trump’s hugely popular social media accounts have been silenced since the day after the deadly January 6 riots when his supporters stormed the U.S. Capitol.

Facebook will decide on Wednesday whether he will be allowed back onto the world’s biggest social media platform.

The company’s oversight board will announce its ruling around 9 a.m. ET. If it rules in Trump’s favor, Facebook has seven days to reinstate the account. If the board upholds Facebook’s decision, Trump will remain suspended.

Twitter has already said that Trump’s account has been suspended permanently, even if he were to stand again for President in 2024.

Announcing the unprecedented decision in the aftermath of the riots, Facebook CEO Mark Zuckerberg said the risk of allowing Trump to continue using the platform was too great.

‘The shocking events of the last 24 hours clearly demonstrate that President Donald Trump intends to use his remaining time in office to undermine the peaceful and lawful transition of power to his elected successor, Joe Biden,’ Zuckerberg wrote on his Facebook page on Jan. 7.

While Trump aides have spent months teasing his plans to launch his own social media platform, his spokesman Jason Miller said the new blog was something separate.

‘President Trump’s website is a great resource to find his latest statements and highlights from his first term in office, but this is not a new social media platform,’ he tweeted. ‘We’ll have additional information coming on that front in the very near future.’

During his social media ban, Trump has had to embrace other platforms for getting his message out.

He does frequent interviews with friendly news outlets and has emailed a flurry of statements to reporters through his official office and political group.

Trump has even said he prefers the statements to his old tweets, often describing them as more ‘elegant.’